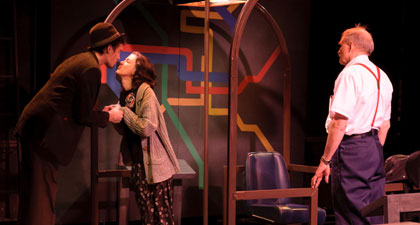 Agnes Under the Big Top is, at times, a lot of fantastic adjectives: ambitious, confident, funny, provocative. But the end result winds up being notably less than the sum of its parts.

(I should note here that Agnes Under the Big Top, playing through March 6th at Mixed Blood Theatre, is an expansion of a smaller work, Cirkus Kalashnikov, that I directed last April as part of Bedlam Theatre’s 2010 Ten Minute Play festival.)

We first meet Agnes, a Liberian woman who makes the deadpan best out of a diagnosis of terminal cancer. Agnes works as some kind of live-in nurse to Ella, a bedridden and icy white woman, and rotates her shifts with Roza, a Bulgarian immigrant. Roza happens to be married to the curmudgeonly Shipkov, a subway operator, who is training an Indian-American named Happy. Got all that? At some point, nearly each of these five people will wind up speaking with one another, whether face-to-face, over the phone, or in some kind of existential confessional. If your mind is flitting to 2005’s Oscar-winning Crash, the tracks definitely run parallel here. Finally, Agnes decides to finish out her life by her own choice and not on her cancer’s timetable.

And that’s about it, in broad strokes.

Aditi Brennan Kapil bites off a lot with her script. We’re treated to five very distinct people from five very different walks of life. A sixth character, a subway busker who serves as the court’s jester, leaps into their imaginations and allows us to mine even more out of these folks’ emotional and narrative gears. The non-Agnes stories are rich and the metaphors they introduce are intriguing, but their greater function never lands that knockout punch the script is looking to connect. It’s this overall lack of streamlining and focus that causes a story so full minute-by-minute to feel so vapid when taken as a whole. What’s even more dangerous, the character of Shipkov threatens Agnes for the “protagonist” title; truth be told, he’s written tighter, he’s the keeper of the “big top” circus metaphor, and he gets the final, compelling monologue of the evening.

Kapil writes a tall order for her performers, and there isn’t a weak link in the cast, especially with Nathaniel Fuller’s Shipkov and Nick Demeris’s subway busker. The former continually brings nuance to a vocabulary riddled with a certain four-letter word, the latter does wonders without speaking at all. As an added bonus, Demeris provides the pre-show entertainment with some freestyle vocal resampling. You can even tip the man (karma, dude).

The clear champions in Agnes, though, are the designers. Scenic designer Andrea Heilman does a fantastic job realizing an intricate playing space that successfully juggles a top-story bedroom and an underground subway platform. Seriously, make sure you arrive early just to ogle the literal metaphor of train rails swooping up to become a window frame. Lighting around an awkward behemoth of a set like this would normally be a nightmare, but Jeff Bartlett makes it look completely effortless. Exceeding both set and lights, however, is Katharine Horowitz and her sound design. From the smallest hydraulic hiss to the largest railway clatter, the soundscape in Agnes is robust and, for lack of a better term, just plain fun. The times where these three can line up their big guns at once prove to be an absolute delight for the senses.

At one point during Agnes Under the Big Top, Ella remarks: “This is not a conversation.” And that’s ultimately what the play’s meat feels like: not a conversation. The characters talk, sure, but their life stories come more from a place of park-‘n’-bark obligation than external solicitation. The final product, while excellent-looking and -sounding and well spoken, is prone to derailment at all the important junctions.