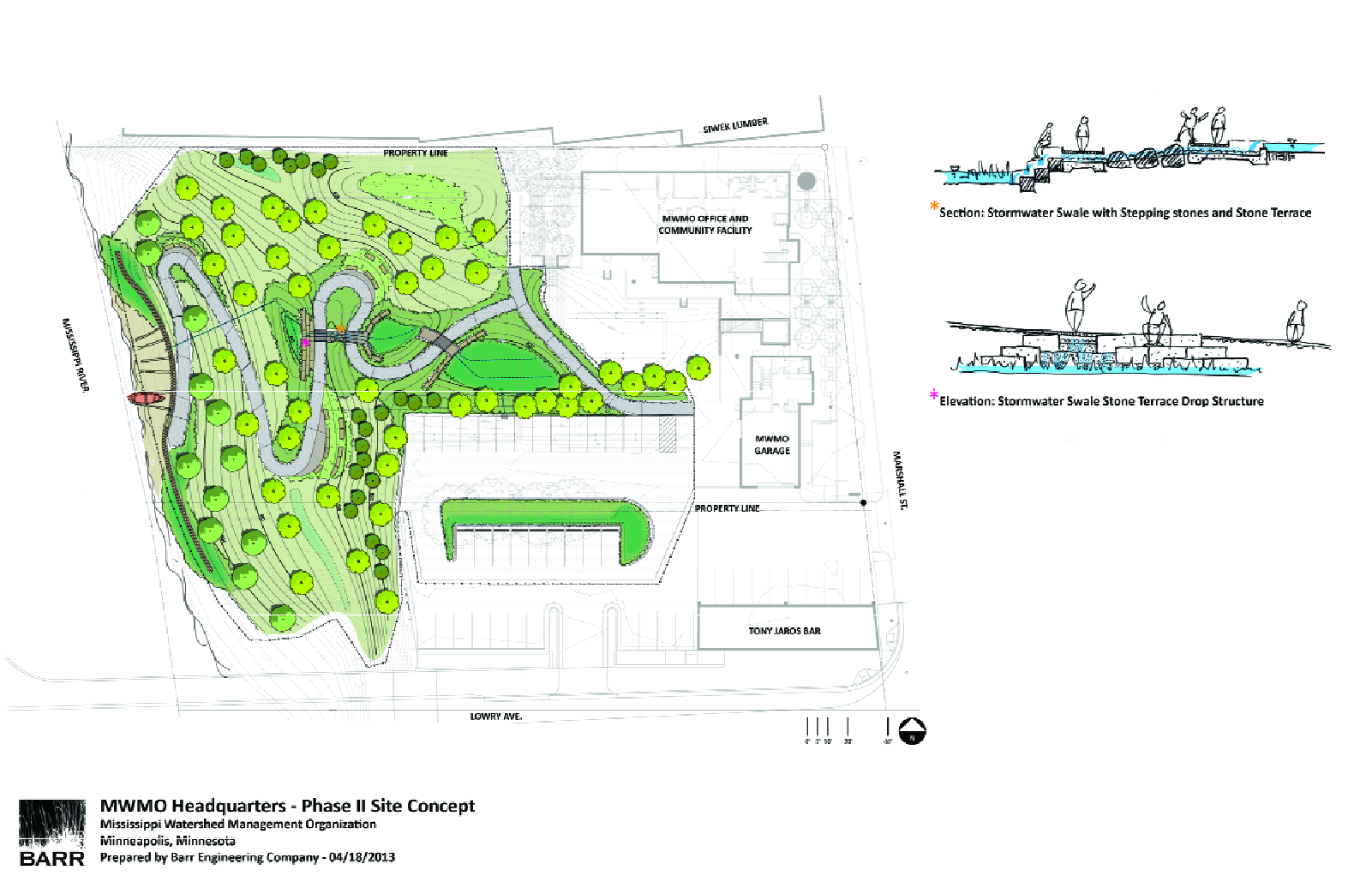 Before Tony Jaros’ bar, before the IBEW union hall, when big chunks of Northeast and North Minneapolis showed up as wetlands on early plat maps, there was a ravine on what is now the Tony Jaros property. As their new neighbors, the Mississippi Watershed Management Organization, establish their new back yard at 2522 Marshall St. NE, they’re going to put back that ravine’s function.

“It’s not a creek restoration project,” rather a “more engineered” version, said Eric Holt, a designer with Barr Engineering. “The site is meant to demonstrate the mission and values of the organization as well as reconnecting people to the resource. It’s going to function as a public park.”

As shown in the diagram, a switchback path, handicap-accessible, winds its way down to the river. Storm water flows as guided, from the top of the hill, through “drop structures” with manually adjustable flow controls combined with the sidewalk bridges. Everything’s out in the open except the final pipe to the river under the beach.

The MWMO building already demonstrates water handling through a green roof that captures some of the rain, a cistern that collects some roof runoff, a sunken tree grove in the front of the building that can hold water while it infiltrates the soil, or be released into a bed of rocks used as a bare-root tree stock nursery.

Phase II, affectionately known as “the back yard” will have even more controls and areas where samples can be taken to test how well the water treatment is working. “They may partner with the [University of Minnesota] and St. Anthony Falls Lab people” on experiments, Holt said.

Grants from Department of Employment and Economic Development (DEED) and Hennepin County helped clean out the old fill. There was dirt that needed to be hauled out, but Holt said there was enough other clean dirt on site that they could meet the requirement of four feet of clean dirt under all green space, without hauling any dirt in.

There will be something of an amphitheater or outdoor classroom near the river with stone benches facing the river.

Plantings will graduate from feeling urban at the top of the hill, to more natural toward the river. Three types of prairie grasses will be planted, including little blue stem and prairie dropseed. MWMO may choose later to plant various flowers.

Basins will be planted with native sedges, and common flood plain species. “Upland, we’ll have two or three kinds of oaks. And we’re pushing some other species because of climate change, such as Shagbark Hickory which is common where I grew up in Iowa,” Holt said. We’re always thinking what new drought tolerant trees” can be tried.

They plan to be done by mid-November including the planting, as long as the ground doesn’t freeze. Seeds will stay dormant until spring.

“The second year will look better than the first,” Holt said, but the plants should fill in quickly.

Artist James Brenner and signmaker/fabricator Ben Janssens met with a handful of interested neighbors and public art followers Oct. 19 to look at preliminary concepts for a “monumental sculpture” on the corner of the MWMO property that is “integral to wayfinding.” Straddling between art and

signage, the idea takes the letters and waves from the MWMO logo and renders them in eight- or ten-foot tall sculptures covered in part with native vines.

Using Brenner’s signature technique of Coreten steel and thick, durable glass, back-lit with LEDs, there would be an illusion of movement as people pass by. Participants also discussed the more traditional signage and address placement for the building.

Brenner, an Audubon neighborhood resident, has developed several sculptures and the Innovation backstop at Jackson Square and Edison High School using these materials.

In the photos, Janssens and Brenner, upper right, used cardboard models to show two different sizes of letters. The steel could be on concrete bases, design yet to be determined. At right, an example of bittersweet, one of the possible vine choices. After more development, the MWMO board will consider the design recommendations.