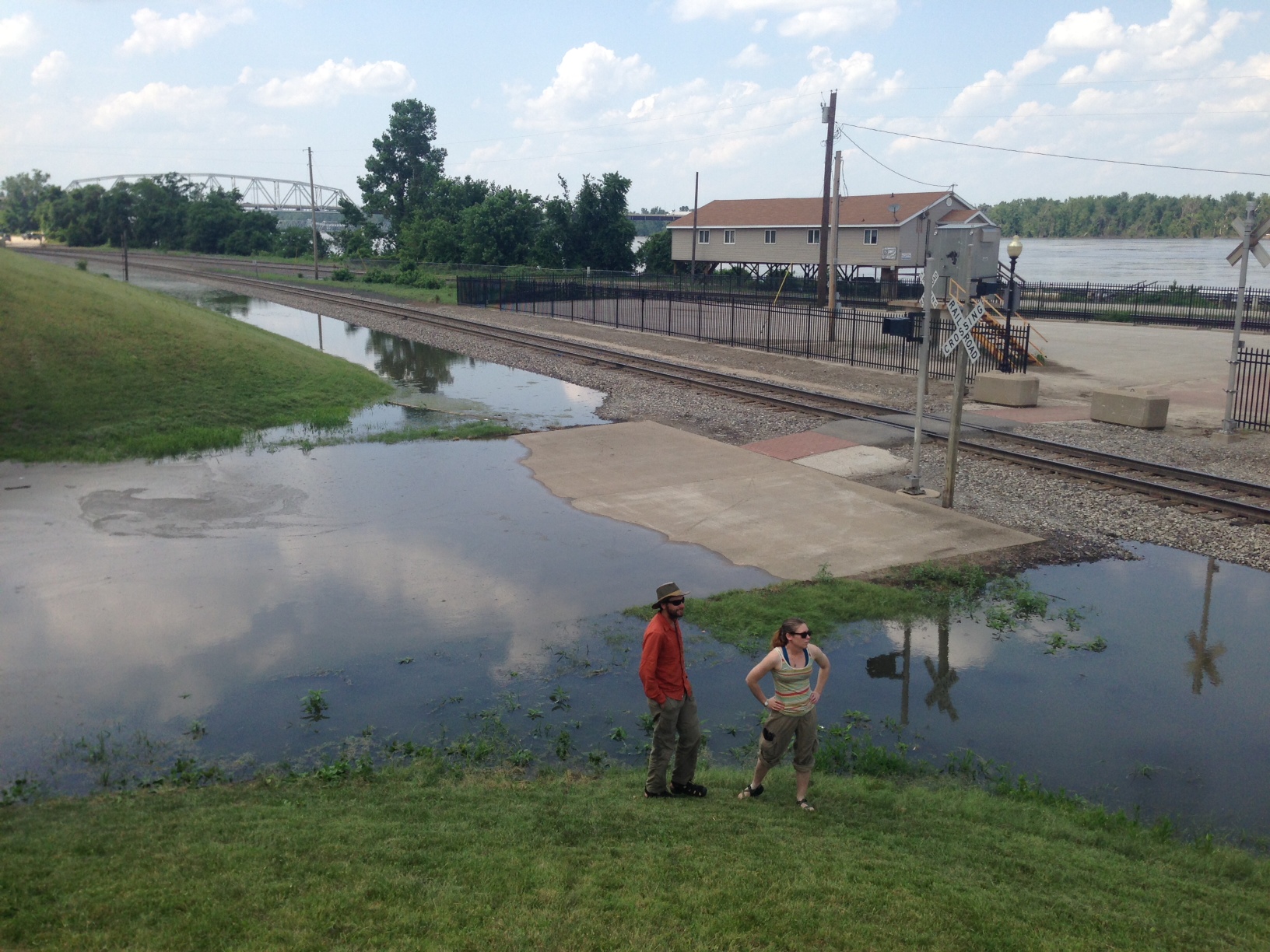 Dave and Linnea assess the situation in Hannibal.

HANNIBAL, MISSOURI—I’m writing from Java Jive, “the first coffee shop west of the Mississippi.” My girlfriend Dana and I are on a rescue mission of sorts, helping our friends Linnea and Dave. They’ve been canoeing down the length of the Mississippi River, starting last month in Itasca. This week they reached the Quad Cities, where the water is high and rising.

The rains that made for such a dour spring-into-summer in the Twin Cities have swelled the great river until it’s pushing at its banks from Minnesota to Missouri. Locks are closed, docks are barely above water, and here in Mark Twain’s home town, the flood gates are closed.

The high water and quick current have made for easy canoeing—once Linnea and Dave are on the water. The trick is getting on the water, and off of it. They’ve been camping in more-or-less ad hoc sites up and down the length of the river, but many low-lying islands and shorelands are now, if not completely underwater, extremely wet.

For safety’s sake, Linnea and Dave decided to make what we’re calling a big portage from the Quad Cities to Hannibal, passing over the section of the river where flooding is worst. Arriving here in Hannibal, though, we found the road to the river blocked by flood gates that have closed to protect the historic town—and its associated tourist infrastructure, such as Tom Sawyer laser shows (I’m not making this up)—from the river that made it famous.

Linnea and Dave have been making the most of the challenging situation, and Dana and I have been glad to come along for the ride, turning our land-ferry expedition into a mini-vacation. Last night we stayed at the Isle of Capri riverboat casino in Bettendorf, Iowa, where we sampled a couple of the local microbrews and lost a few bucks on the slots. This morning we visited riverside attractions including the grave of Norma Jean the elephant—who, in 1972, was killed by lightning in Oquakwa, Illinois and was buried on the spot. Dana drove her canoe-laden Corolla down Snake Alley—America’s crookedest street, per Ripley himself—in Burlington, Iowa. For lunch, we stopped in Nauvoo, Illinois, where Joseph Smith led the Mormons to safety in 1839.

Tonight we’re staying in Hannibal; as I write, Linnea and Dave are on the phone with a riverboat captain (when the woman at the tourist center learned of their situation, she went right to the top), trying to figure out what their next step will be. Dana and I are heading back to Minneapolis tomorrow, but you can follow Linnea’s and Dave’s adventures on their blog.