Living, breathing Civil Rights Era history is coming to South Minneapolis’ Hosmer Library in the renowned person of James Meredith, who will read from and talk about his book, A Mission from God: a Memoir and Challenge for America (Simon & Schuster).

Following his acclaimed Three Years in Mississippi after nearly 50 years, A Mission from God, written with award-winning author William Doyle, reflects on what went on in Meredith’s mind and how he felt in his heart when he did the unthinkable, single-handedly taking on the most viciously racist state in the union (of which its governor and citizens were staunchly proud) to claim the right to enroll for classes at the University of Mississippi.

In 1963, the South, instead of practicing the politically correct racism that prevailed in the North, which claimed to embrace equality while covertly stonewalling it, was very much outright in its refusal to acknowledge, much less accept, people of color as Americans. Blind, unreasoning hatred of Black humanity was such that it actually took 500 U.S. Marshals, the 70th Army Engineer Combat Battalion, the 2nd Infantry Division U.S. Army troops, the 503rd Military Police Battalion, and Mississippi’s National Guard to hold off a rabid, jeering horde of blood-thirsty bigots.

Television and film dramas, even documentaries, romanticize then-President John Kennedy and his Attorney General Robert Kennedy for dispatching all that aid like the cavalry coming over the hill when Gov. Ross Barnett withdrew the local police and was going to let Meredith get killed. A Mission from God, among other things, sets the record straight, flatly stating, “[The Kennedys] were not civil rights heroes…but super-rich politicians who spent their lives ignoring the plight of Black Americans and had to be forced to do the right thing.”

Meredith also goes on to detail for several pages, including a transcript of the telephone call, how, while his life was on the line, the president and attorney general pussyfooted around with Barnett, each side wrangling to try to construct a course of action that would mutually save political face. “The national press,” Meredith writes, “was covering every move and countermove of the drama and, as the chief protagonist, my name became known around the world.” 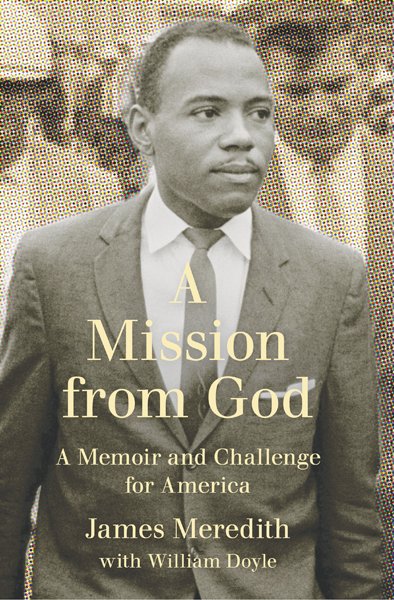 He made it through and graduated, a nothing-less-than-miraculous precedent that made it possible for Cleve McDowell to succeed him (though McDowell was expelled for quite sensibly carrying a gun). Meredith makes no bones about it being clear that, as evinced by finally being allowed into the university, social progress came to this country not because the president or anyone else in power deemed it a moral imperative but because the rest of the world was watching and wondering whether America was ever going to put its money where its mouth was with respect to the rights of its Black citizens.

The other landmark event for which Meredith is famous, that trained an international spotlight just as starkly on the United States and its hypocritical failure to honor its supposed creed of letting freedom ring from sea to shining sea, was his March Against Fear of 1966. Still more than they hated integration and Blacks getting an education, Southern supremacists were deathly afraid of Black people voting bigots out of political power and thereby dismantling a system of subjugation they considered their God-given right.

The year before the Voting Rights Act was passed, promising federal enforcement of the right to vote. That didn’t mean a thing to the infamous Ku Klux Klan and other terrorists who, with the blessings of police departments, courts and politicians, were bound and determined to harass, beat and lynch citizens who tried to exercise that right.

The Voting Rights Act may as well have meant the man in the moon can vote: He was about as likely to make it to the polls as were Blacks. Meredith decided it was time to do something about that, to make change that actually could be believed in some 50 years before it became a hollow campaign slogan.

On June 6, 1966 he announced the March against Fear to rally support for Black voters in the South, and he started out alone on foot from Memphis, Tennessee headed for Jackson, Mississippi. By the time he was done, civil rights organizations and a national public had joined him — physically and in spirit.

He also had been shot by Aubrey James Norvell. The bullet didn’t stop him. He recovered from the wound and rejoined the march before it reached Jackson. The March against Fear opened a floodgate: 4,000 Mississippians registered during the walk and shoved the boot off thousands of Black necks.

A Mission from God is about more than remembering the past. Connecting crucial dots, Meredith emphasizes that education is as important to Black America now as it ever was. For good measure, he is not particularly impressed with our current president’s failure to adequately address that issue.

In fact, in a 2012 press release for the book, he rakes Barack Obama over the coals, accusing that in at least one aspect, choosing between him and Mitt Romney amounts to six of one, half a dozen of the other. “President Obama and Governor Romney are contributing to the destruction of American K-through-8 public education by proposing failed or unproven policies, supporting the continued waste of billions of dollars of taxpayer funds on education, and neglecting America’s children, especially the poor. There is no real difference between the two candidates…when it comes to the most critical domestic issue of our age, public education.”

He goes on, “Both…are in favor of multi-billion-dollar boondoggles and money-grabs that have little or no evidence of widespread benefit to K-through-8 children or the community at large, like over-reliance on high-stakes standardized testing; over-reliance on charter schools and cyber-charters; and the funding and installation of staggering amounts of unproven computer products in schools.”

Meredith sums up, “Education is much too important to be left to politicians. They have failed. They came up with No Child Left Behind and Race to the Top, both of which are largely failures. It is time for parents, families and teachers to take back control, and to step up to their responsibilities to take charge of education.”

A Mission from God is penned in a casual, conversational, remarkably candid hand that doesn’t spare even his own personal flaws (which is why you don’t mind it so much when he blows his own horn — loudly). It’s as rich in personality as it is in social, political and historic significance. It should be a memorable experience to observe and interact with James Meredith at one of the Twin Cities’ most significant events of 2013.

James Meredith will be speaking at Hennepin County Library Hosmer Branch, 347 38th St. South in Minneapolis, on August 29 at 6 pm. The event is free and open to the public.