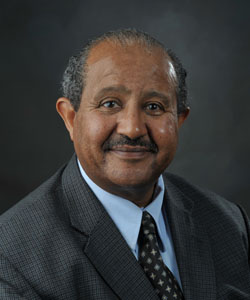 “It pains me that the world is watching as Somalia experiences extreme famine. Is the world watching as a country is wiped out? Why is there no outcry?” Daniel Abebe asks.

Back in 1984, Abebe saw a dramatically different response when famine hit his home country, Ethiopia. Then he was a graduate student in Minnesota, working at the university hospital. Today he’s a university dean at Metropolitan State University. The Daily Planet spoke to him on Minnesota’s responses to famine in Ethiopia in 1984 and in Somalia today.

Read other TC Daily Planet articles on famine in Somalia. See list of organizations to donate to for famine relief.

During the 1984-85 Ethiopian famine, Abebe said the reaction to assist in relief efforts by Minnesotans was overwhelming. That famine was at a magnitude that nobody expected, and the world responded positively, said Abebe. He said that people were shocked into action by several events. Images by Kenyan photographer Mohamed Amin shook the world to action as his photographs of starving children from the famine splashed across newspaper and magazine covers.

To raise awareness and relief funds in Minnesota, “we worked with Marlene Johnson (Lt. Governor) and Congressman Bruce Vento to get citizens of this state to take part in the relief effort, which resulted in raising over $320,000.”

“We were no more than 100 Ethiopians living in Minnesota, but we were able to work with the state around bringing awareness to the humanitarian crisis in Ethiopia.”

Abebe worries that people are slow to respond today because they are seeing the famine in Somalia as a repeat of famines over the years in that region. He said he does not see the same level of commitment to global events. Something comparable happened in Haiti, when people around the United States came together, but nothing of the magnitude of relief efforts as the world came together for Ethiopia the mid- 80s.

Abebe says that despite a strong dislike of the Marxist Ethiopian government then, the U.S. government still came to the aid of those Ethiopians stricken by famine. “A lot of the food was shipped to Khartoum from Duluth and then trucked into Ethiopia,” he said. Other humanitarian relief went directly though the Ethiopian government.

At that time, the Ethiopian government faced violent opposition from what is now Eritrea and other regions like Tigray. A 2010 BBC report showed that insurgents from these regions were funneling money that was intended for relief.

Former rebel leaders told the BBC that they posed as merchants in meetings with charity workers to get aid money. They used the cash to fund attempts to overthrow the government of the time.

One rebel leader estimated $95m (£63m) – from Western governments and charities – was channelled into the rebel fight.

Acknowledging the threat to the lives of humanitarian relief workers in Somali, Abebe asked, “Who determines who has access at times like these? Do relief agencies have the capacity to reach those who really need their help?”

Over the years, the American government has been criticized for restricting money flow into aid agencies for fear that that money would end up in the hands of terrorists. However, this week, the Obama administration recently has reassured donors, as the New York Times reports:

Administration officials said Tuesday that new guidelines would allow charities to provide famine aid as long as they pledge their best efforts to combat attempts by the Shabab to hoard aid or collect taxes on supplies.

“We’re trying to ease the process for these organizations to get the proper licenses,” Mark Toner, a State Department spokesman, said. Given the widespread violence and corruption in Somalia, he said the United States would exempt aid groups from some legal constraints that would hinder them from reaching starving Somalis.

Abebe, who headed the local Ethiopian organizing relief committee spoke to churches, schools, universities and Rotary clubs. The  famine, he said, presented itself as a perfect opportunity to “save” Ethiopians.

Commending the Somali diaspora’s fundraising efforts, Abebe urged everyone to get involved: “The Somali diaspora cannot deal with this on their own. They could raise several million dollars among themselves, but this alone will not be enough. We need a global response. This is an opportunity for the world to demonstrate that we care about humanity; and not just about the war of terror.”