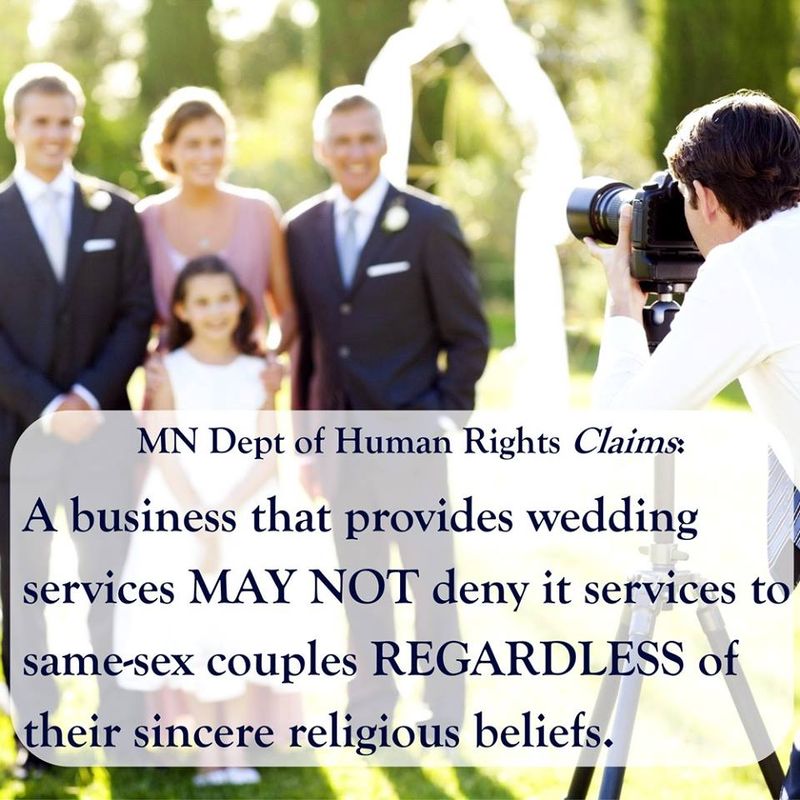 Gay marriage: Opponents of same-sex marriage plan to offer a bill that would make it clear businesses owned by people who oppose such marriages are not required to service gay weddings.

This is a minorversion of what have been dubbed “New Jim Crow” laws being introduced in state legislatures around the country.

The bills appear to be crafted by the Alliance Defending Freedom, which was a partner in a forum in St. Paul last fall. The Star Tribune’s Baird Helegson reported in Religious freedom forum to offer advice to people of faith:

Fresh from a political defeat, local religious groups that oppose same-sex marriage are hosting a daylong conference later this month to make sure people of faith know their rights.

Many of the groups fear Minnesotans’ religious freedoms are under attack, not just with same-sex marriage laws, but throughout society. . . .

Nelsons said the event will be more wide-ranging than just the marriage issue, and is not a first step to reignite a new marriage fight. “We are not trying to pick up the marriage fight battle in the legislative sense at all,” he said. . . .

In other states where same-sex marriage is legal, like Washington, state human rights officials have pursued stiff fines against wedding businesses that refuse to provide goods and services to gay and lesbian couples.

That has yet to happen in the two months gay marriage has been legal in Minnesota, but same-sex marriage opponents are watching closely to see if state officials start investigating businesses owners who refuse to work for same-sex couples. . . .

Officials with the Minnesota Department of Human Rights said that anti-discrimination laws prohibit businesses that provide wedding services or products from refusing to work with a same-sex couple based on sexual orientation.

To do so is discrimination no different from refusing to serve someone who is black, Jewish or Muslim, the state says.

According to Minnesota For Marriage’s website, the organizations that sponsored the conference included:

In commentary at CNN, Matthew Whitaker (ASU Foundation professor of history and founding director of the Center for the Study of Race and Democracy at Arizona State University) echoes the Minnesota Department of Human Rights’ position in Arizona’s shameful ‘right to discriminate’ bill:

. . . The bill was written by the Center for Arizona Policy and a Christian legal organization called the Alliance Defending Freedom. They were inspired, in part, by the case of a New Mexico wedding photographer who was taken to court after refusing to shoot a gay commitment ceremony. The bill seeks to shield Christians from members of the lesbian, gay, bisexual and transgender community who dare to seek equal protection under the law.

Specifically, the bill protects all individuals, businesses and religious institutions from discrimination lawsuits if they can show that their discriminatory actions were motivated by religious convictions.

Under the guise of religious freedom, however, the bill would enable businesses potentially to discriminate against virtually anyone — not just Jews, Muslims, Sikhs, agnostics and atheists, but also unwed mothers, Rastafarians and Budweiser T-shirt wearers. This bill is arbitrary, capricious and antithetical to the spirit of brotherhood and sisterhood that inform our documents of freedom.

Given the presence of the Alliance Defending Freedom in last fall’s conference, Bluestem will be looking for the bill Whitaker mentions. How will it compare to bills from Arizona and elsewhere?

Kansas set off a national firestorm last week when the GOP-controlled House passed a bill that would have allowed anyone to refuse to do business with same-sex couples by citing religious beliefs. The bill, which covered both private businesses and individuals, including government employees, would have barred same-sex couples from suing anyone who denies them food service, hotel rooms, social services, adoption rights, or employment—as long as the person denying the service said he or she had a religious objection to homosexuality. As of this week, the legislation was dead in the Senate. But the Kansas bill is not a one-off effort.

Republicans lawmakers and a network of conservative religious groups has been pushing similar bills in other states, essentially forging a national campaign that, critics say, would legalize discrimination on the basis of sexual orientation. Republicans in Idaho, Oregon, South Dakota, and Tennessee recently introduced provisions that mimic the Kansas legislation. And Arizona,Hawaii, Ohio, Oklahoma, and Mississippi have introduced broader “religious freedom” bills with a unique provision that would also allow people to deny services or employment to LGBT Americans, legal experts say.

“This is a concerted campaign that the religious Right has been hinting at for a couple of years now,” says Evan Hurst, associate director of Truth Wins Out, a Chicago-based nonprofit that promotes gay rights. “The fact that they’re doing it Jim Crow-style is remarkable, considering the fact that one would think the GOP would like to be electable among people under 50 sometime in the near future.” . . .

Liebelson identifies other groups in addition to the ADF. Check it out.

Long before marriage equality became law in 2013, people living in Minnesota have enjoyed equal protection of the law in housing, insurance, goods and services, contracts, health benefits, hospital visitation rights, and employment, without regard to sexual orientation and/or gender identity.