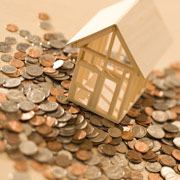 This paradoxical outcome was the result of the structure of the old homestead credit. During the period from 2002 to 2008, the statewide taxable value of homesteads was increasing. As noted above, as homestead values grew beyond $76,000, the amount of the homestead credit payment declined; because the value of the overwhelming majority of Minnesota homesteads was above $76,000 throughout the era of the market value homestead credit, the growth in values led to a statewide decline in credit payments. To further compound the problem, the growth in homestead taxable value from 2002 to 2008 exceeded the value growth of other types of property, leading to an increase in the share of total statewide property taxes borne by homeowners.

The failure of state policymakers to deliver the homestead credit reimbursement to local governments created uncertainty within the budgets of the affected jurisdictions, some of which responded by increasing their levies in anticipation of future state failure to deliver credit reimbursements. The regular cuts to the market value homestead credit was another unfortunate byproduct of the “no new tax” mentality, whereby “fiscally conservative” state leaders would pass the burden of perennial state budget deficits on to local governments and local property taxpayers rather than increase state taxes. However, the indirect manner in which property tax relief was delivered under the old credit made it relatively easy for state policymakers to engage in this fiscal chicanery.

Third problem with the old market value homestead credit is that property tax relief was delivered with no direct consideration of the taxpayer’s ability to pay. Again returning to the example of the $200,000 homestead, the property tax paid by the owner of the home was reduced by the $192.40, regardless of the total property tax payment that was due or the income of the homeowner. Regardless of whether the total tax bill was high and the homeowner income was low or vice versa, the same $192.40 payment would be made. In short, the old market value homestead credit did not do a good job of targeting the relief to the homeowners who needed it most.

The solution devised by the 2013 Legislature and incorporated into the new omnibus tax act—the new homestead credit refund—is a more effective way of providing homestead property tax relief that avoids the problems resulting from the old market value homestead credit. More on this next week in part two of this series.

†This estimate is based on a Minnesota 2020 analysis using the Department of Revenue’s statewide parcel specific database.