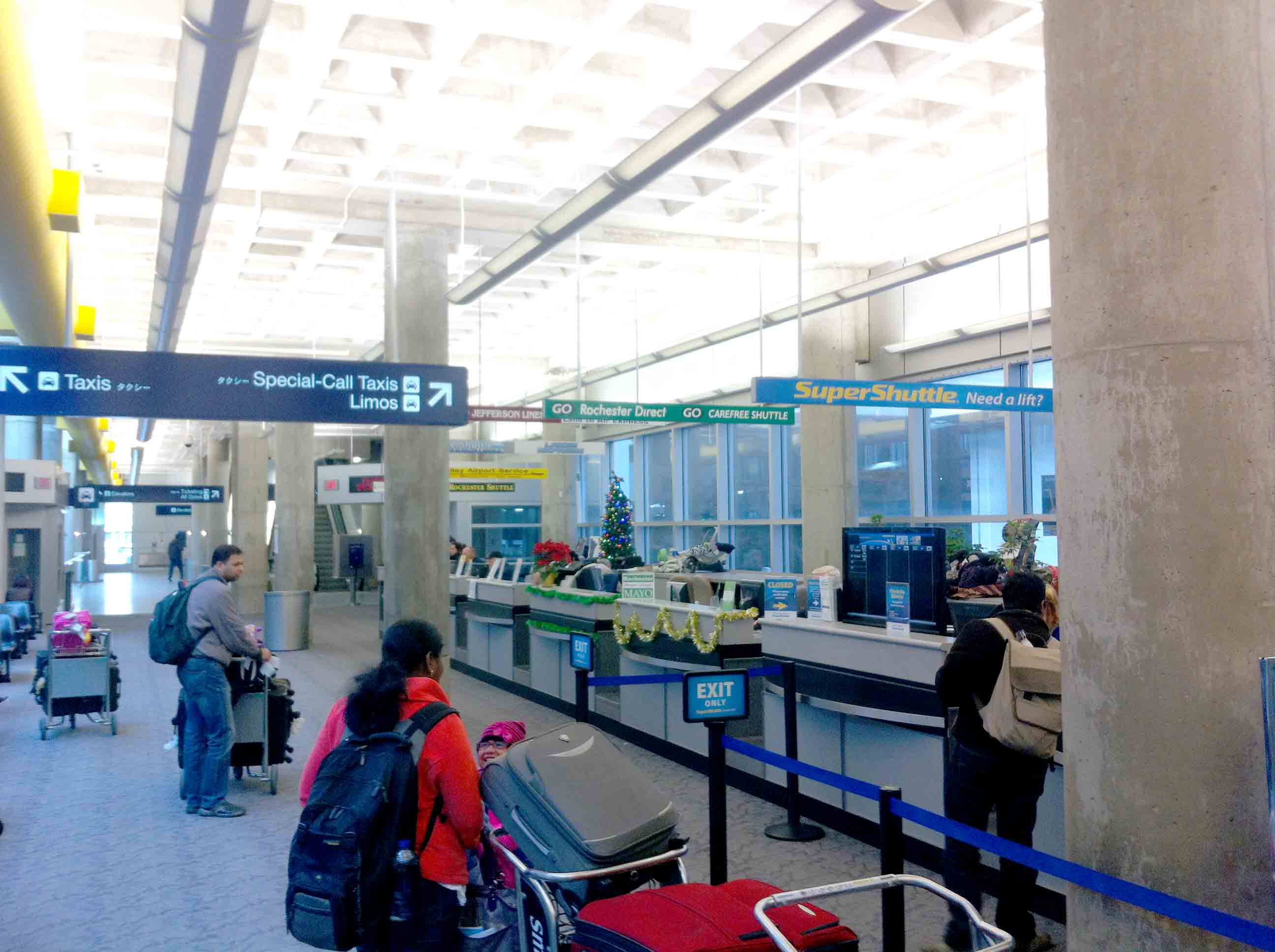 There was a time when buses and trains connected the Twin Cities with every corner of Greater Minnesota. The trains are gone except for Amtrak’s Empire Builder, which has become quite unreliable and inconveniently runs west of Minneapolis in the wee hours. Except for its express link to Chicago via Eau Claire and Madison, Greyhound has completely withdrawn from the state where it was founded in 1914. Locally owned Jefferson Lines has filled many of the gaps, but conventional bus service has become sparse, mostly bypassing the small towns and running only once or twice daily.

The dreary state of traditional intercity public transportation is the direct result of competition from the private automobile. It has driven the rural buses out of business—except it hasn’t. Under the radar, a fast, frequent network of scheduled private shuttle buses and vans has appeared. Their purpose is to feed the Minneapolis-St. Paul International Airport. These airport services ignore the downtowns completely. The only other destinations they sometimes serve are the Mall of America and the VA Hospital, since both are close to the airport.

The service frequency is unprecedented, greater than ever before. Rochester now has two companies offering competing hourly non-stop service to MSP. St. Cloud has two competing carriers that together provide something close to hourly service. The Duluth carrier runs 12 times daily, as does Willmar and Eau Claire. Mankato and St. Peter have 6 daily round trips. There are additional smaller cities that see less frequent service. Here’s the list of towns served:

I first researched these schedules two years ago and there have been fairly significant changes since then. A couple of carriers have exited the market. Others have added destinations and there has been some consolidation. Most notable has been the increase in service. As I read the schedules, there were 57 daily round trips in 2012, and that has grown to 97. Besides the additional trips to MSP, now carriers are starting to feed Rochester from La Crosse, Winona, Albert Lea and Mankato. 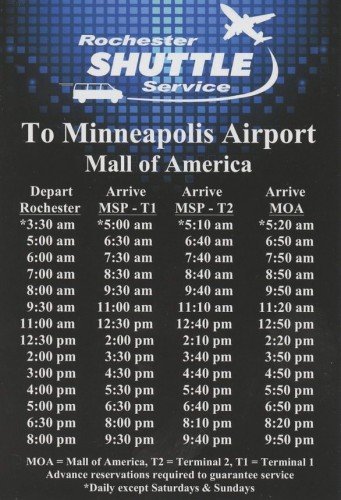 The current schedule for one of the two competing Rochester-MSP shuttle operators.

Whether the fares are high or not, this is indeed a transportation network and it’s already in place. Granted, it is single purpose. It is not interconnected or coordinated. However, with a modest amount of corporate collaboration and a little public investment it could become a true regional system.

Consider what could cheaply and easily be done. The connections to downtown Minneapolis and St. Paul are already there. The Blue Line LRT runs every 10 minutes to Minneapolis and the Mall of America and limited stop Route 54 runs every 15 minutes to St. Paul. From those places you can reach much of the metro area.

Here are more steps that would increase ridership. 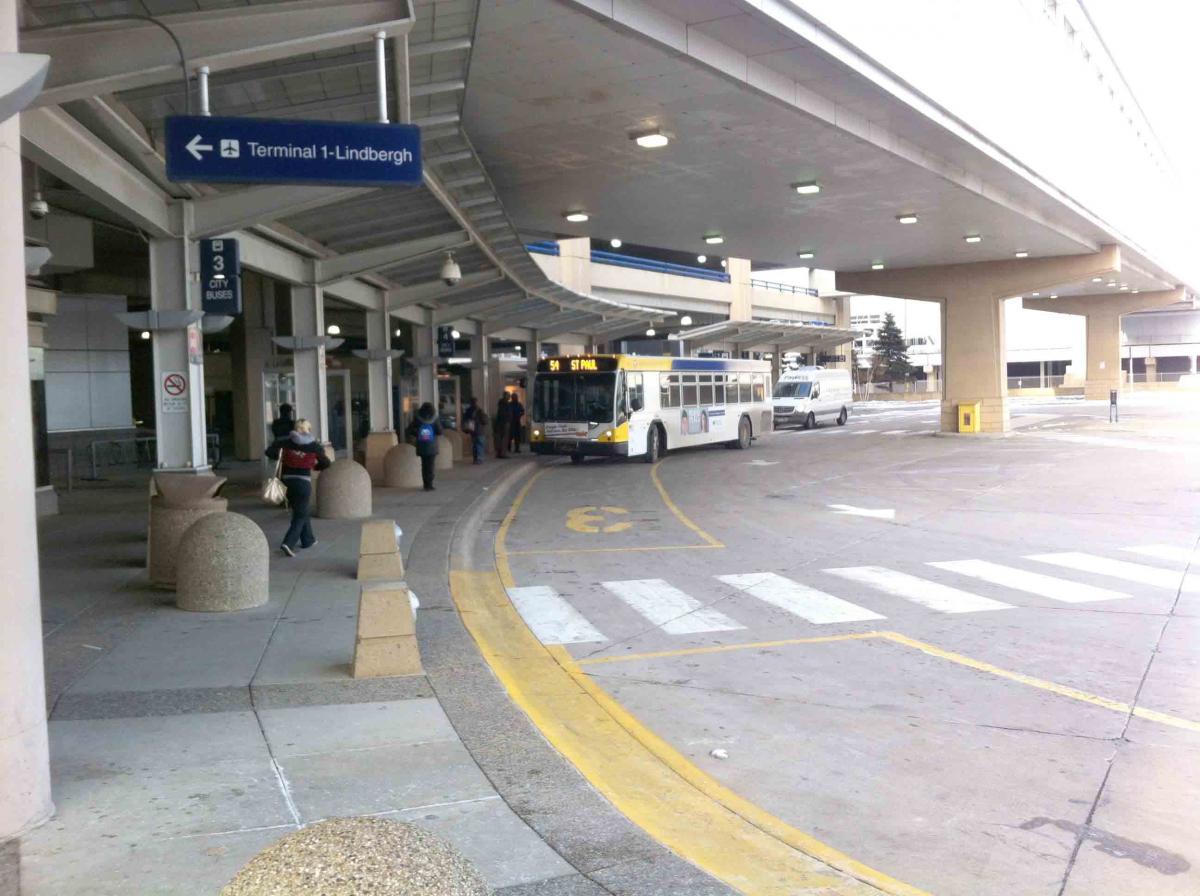 The airport bus station, at the other end of the Terminal 1 parking ramp, directly above the LRT station. That’s the #54 to downtown St. Paul.

I want to emphasize that the carriers would remain separate private companies. The state would simply add value by selectively investing in a service that’s already viable. The private carriers’ bottom lines would improve through lower costs, additional riders, better service coordination and joint marketing. Could it actually happen?