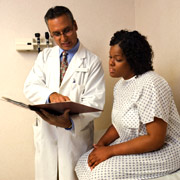 While education policymakers focus on Minnesota’s achievement gap, health care disparities tend not to garner the same attention outside the medical community.

As in education, Minnesota ranks high on a variety of key indicators, from insurance to life expectancy to quality of care, providing the perception that our system works well for everyone.

Unfortunately, this is not the reality. Taking a deeper look, we see Minnesota has some of the greatest health disparities between Caucasian and minority populations, which include African Americans, Hispanics, Native Americans, and Asians.

While health disparities’ causes are complex, occurring throughout life, there are social determinants that can be controlled through better public policy. They include direct health factors—nutrition, stress, physical activity, access to immunization and preventive care, proximity to high pollution areas—to indirect factors—education, safe housing, and income.

In 2000, thirteen years worth of data collected from minority communities by the Minnesota Department of Health (MDH) showed that: The African American and American Indian infant mortality rate was nearly three times higher. The Latina teen pregnancy rate was nearly five times higher, with the African American teen pregnancy even higher. And the American Indian diabetes mortality rate was significantly higher than the white rate.

As a result, the Minnesota legislature passed the Eliminating Health Disparities Initiative (EHDI) the following year. This legislation provided funding for community grants and other strategies to decrease disparities in eight priority health areas:

However, the legislature only established specific goals for two areas—infant mortality and adult and child immunizations. There was just an expectation that disparities in the other six areas would also be reduced.

While the EDHI’s initial steps are commendable, and after a decade have shown some effectiveness, without specific goals and policy actions, how could you expect the disparity would just reduce?

A recent EDHI legislative report indicated that gained successes would not be sustained unless systemic issues like improved data collection and improved cultural competency training for health providers at all levels are addressed.

As Minnesota begins reforming our health care system to coincide with federal legislation, Governor Dayton and the legislature must work toward a more comprehensive health disparities reduction plan. After all, the goal of reform is to improve health quality and cost for ALL Minnesotans.