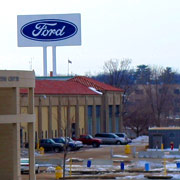 Ford promises to begin leveling most or all of the buildings on the site by the fall ahead of putting it up for sale. The City of St. Paul is formally studying new zoning for the land, which was originally marked residential before Henry Ford snapped it up in the 1920s.

Developers now foresee a mix of housing, retail, green space and perhaps some light industry in the highly desirable Highland Park neighborhood. City officials hope to guide redevelopment away from the autocentric assumptions of an earlier day, requiring transportation infrastructure that accommodates pedestrians, bicyclists and transit as well as private motor vehicles.

This process has plenty of precedent. Of the more than 260 U.S. auto plants that have been closed, nearly half of the sites have been recycled for the new century, according to a 2011 Labor Department study. And an excellent local example is the Ford Center near downtown Minneapolis, which began life a century ago as a showroom and vertical assembly plant for Model Ts.

Carmaking ended there when the St. Paul plant opened in 1925. Its latest repurposing is a $40 million project to guard its historical designation while also creating office space with state-of-the-art energy and environmental conservation features. United Properties, the developer, is seeking Leadership in Energy and Environmental Design (LEED) gold status for the 269,000 square foot building near the Minneapolis transit interchange.

According to the Star Tribune, that would make it one of only a handful of historic properties nationwide to achieve an LEED honor. Although it is costly and unusual to bring a 100-year-old building up to current standards, the developers claim a 31.3 percent reduction in energy use from a new under-floor heating and cooling system.

What’s more, in a building that ushered Minnesota into the auto age, more than 100 of the 1,000 people employed there are biking to work, making use of rows of bicycle racks in the parking garage.

The St. Paul Ford site is vastly different from the mid-rise Ford Center and will probably be redeveloped piecemeal over many years or even decades. But if the final product is as forward-looking as the Ford Center redo, it will be a win-win for investors and city residents alike.