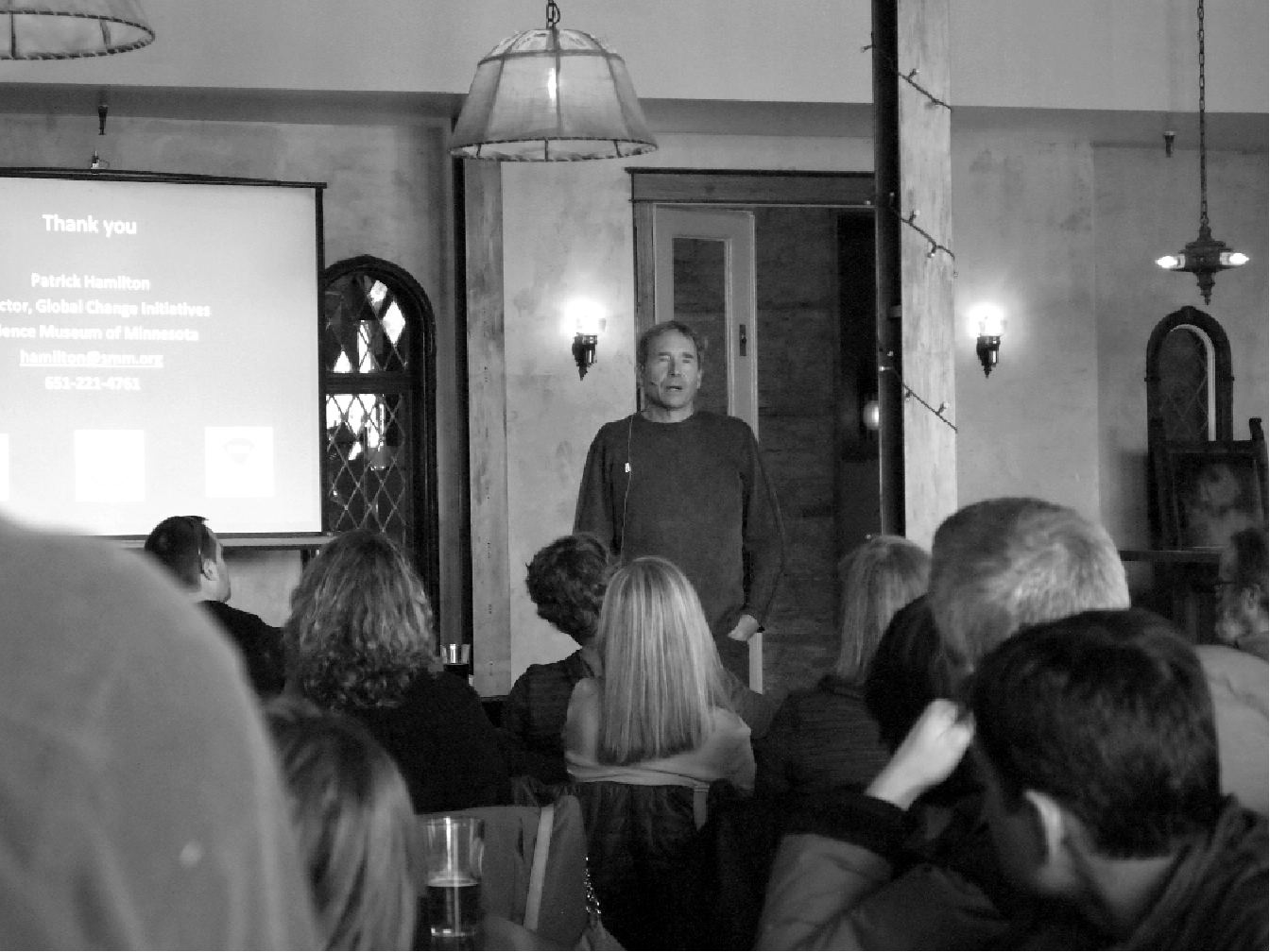 Patrick Hamilton of the Science Museum of Minnesota discussed the heat pumps his institution is using to stop wasting energy. (Photos by Margo Ashmore)

“Why is climate change still a political and economic controversy” when it is no longer a scientific controversy? Patrick Hamilton of the Science Museum of Minnesota (SMM) answered that it’s still subject to the “disinformation campaign by those interested in maintaining the systems that we have.”

He’s the director of the SMM’s Global Change Initiative, and he spoke to a full house at the Aster Café for the March 12 “Sip of Science” series that’s sponsored by the National Center for Earth Surface Dynamics at the St. Anthony Falls (hydrology) Laboratory. Beyond the statistics, however alarming they might be, his message was to encourage people to make “adaptations” and demand “mitigations,” to decrease production of heat-trapping gases. Hamilton said if cities prepare to recover faster from climate disasters, they will be more competitive in the new world realities.

Minnesotans’ insurance rates have been climbing since 2008; the state is now number three in the U.S. for losses from extreme weather. “We used to be cheap, with premiums at 35th in the rankings nationwide, and now we’re number 14.” There have been three “1,000 year events” spaced three years apart in southern Minnesota, one in September 2010 causing flooding on the Mississippi in Saint Paul. There have been times, like 2012, when an extremely wet spring has been followed by an extremely dry summer.

Events like the recent Duluth flood with 10 inches of rain in 24 hours are “no-analog events,” with no counterpart ever in the history kept back to the 1870s, Hamilton said. This change and these events will continue to accelerate, “why?” He showed a time-lapse space photo sequence of the arctic ice cap where the ice volume has dropped dramatically. “The ice used to reflect heat energy back into space.” Add enough energy to the atmosphere, it’s bound to change the way the system responds.

He discussed how water vapor in the atmosphere makes the heat’s effect worse. Especially in the “urban heat island” the young, sick, elderly and anyone without access to air conditioning, suffer days and days not relieved by any of the atmospheric cool-downs that used to come with night breezes. And, “many buildings were not designed to withstand these temperatures and dewpoints, and the kind of precipitation we’ve seen since the 1980s,” Hamilton said.

So, how can adapting to climate change or global warming improve quality of life? Hamilton showed examples, starting with trees – not just any trees, and especially not sugar maples which are cool weather trees. They shut down photosynthesis on hot days. But there are species that tolerate extreme drought and extreme rainfall. He showed an urban park in Charlotte, North Carolina that used pervious pavers and special sand to create a great place for tall trees in a tight space.

Talking about Hurricane Sandy which disabled skyscrapers as their basement electrical/mechanicals flooded, and with residential basements in Edina flooding, “do you think it might be time” to get those crucial house systems out of the way?

The city of Miami is putting in valves in its sewers to allow water to only run in one direction.

To actually reduce the amount of heat-trapping gases (the root of climate change), institutions like the Science Museum are using heat pumps redistributing heat generated within the building, and using the earth’s constant temperature underground to sink heat in the summer and extract heat in the winter.

Won’t this just also eventually have unintended consequences for the soil? “Probably, but it will be less than the chemical changes that are happening now,” Hamilton said. Carbon dioxide dissolving in water creates carbonic acid, making the ocean less conducive to living things. 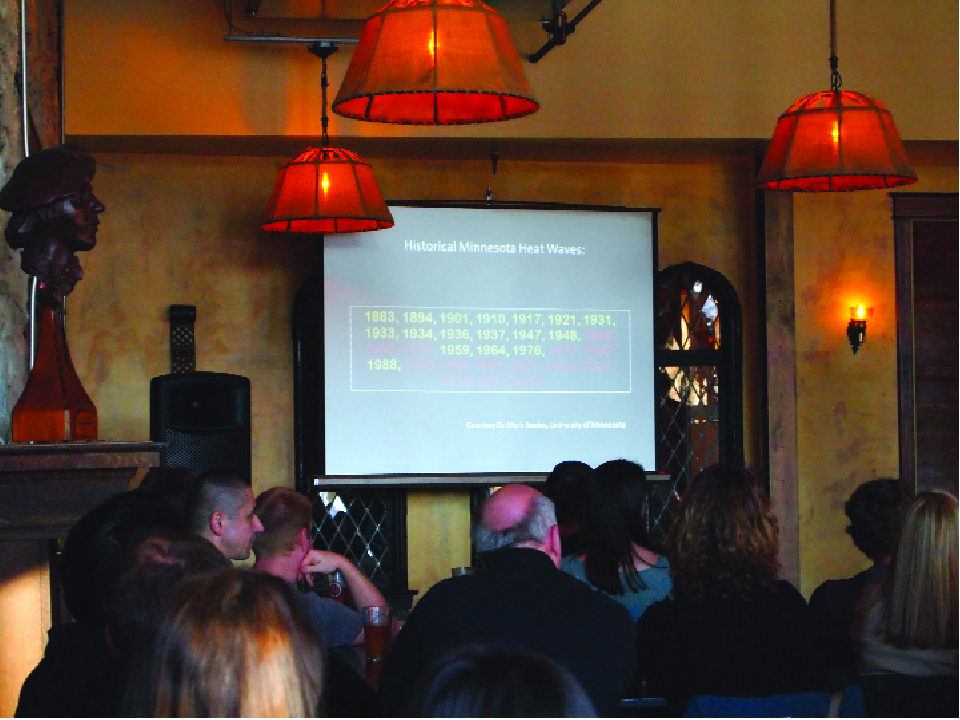 “For almost a hundred years we put garbage and raw sewage into the river. Now we pay to have sewage and garbage taken care of. In the 1980s, sulfur dioxide and the resulting acid rain were seen as just the price of electricity. Well, we put a price on it, and have reduced it dramatically.” His point, that as one participant suggested there be a carbon tax, inspire different behavior by making it more expensive to keep polluting.

For a while, “There was a concern that adaptation was waving a white flag on mitigation,” he said, “but until people get involved in adaptation, it will remain abstract. It [climate change] is happening now and it is altering the landscape,” Hamilton said.

The Science Museum helped the City of Saint Paul envision what it would do about various complex scenarios that might occur. Individuals and communities should start thinking what they can do. “Nothing is more infectious than good ideas,” Hamilton said, “cities are the innovators of the planet,” and the Twin Cities are filled with creativity and innovation, connections, wealth and wherewithal.

The next Sip of Science (second Wednesday of each month) will feature a scientist from Duluth. More information and a sign-up for their email list at www.nced.umn.edu/content/sip-of-science. Frequent attendees told me the room fills up fast and is often standing-room-only (it’s the room next to the main café). Topics are not all related to climate change.

Most people were sipping beer, and unobtrusive servers delivered food during the program that was ordered before it started. The Aster Café is at 125 SE Main St., parking is available for $3 in the ramp connected by tunnel to St. Anthony Main. Programs start at 5:30 and run a little more than an hour.