Minnesotans from faith, labor and community groups rallied outside of the annual meeting of the Minnesota Chamber of Commerce today to demand that large banks and corporations pay their fair share of taxes, invest in good jobs, and fix the foreclosure crisis. They say that the Minnesota Chamber of Commerce has spent over $5 million lobbying for job-killing cuts to critical services while opposing paying their fair share. 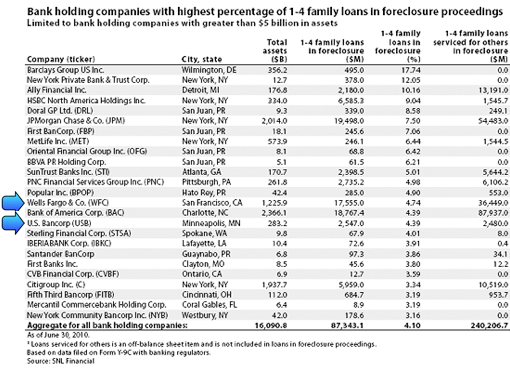 “Major banks like Wells Fargo and USBank need to pay their fair share to contribute to a future of shared prosperity for all and take positive steps to fix the foreclosure crisis,” said the Rev. Grant Stevensen, the Pastor of St. Matthew’s Lutheran Church and President of ISAIAH. “The Minnesota Chamber of Commerce has spent millions lobbying for job-killing cuts to critical services while opposing paying their fair share.”
(Minnesotans for a Fair Economy Media Release) 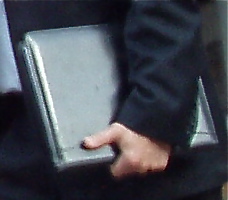 When I arrived at the rally, the group was circling in front of Crowne Plaza Hotel, right at the time that the event was finishing. It is legal to protest if one keeps moving and does not block the entrance. Walking around I found the side entrance being heavily used by older men in business suits carrying black binders.

The garage was carefully marked as closed, but a lady would move the sign whenever she got a call. A gentleman asked me to leave as I entered the hotel. So security was tight and really the only inconvenience to the event was having to use the side entrance.

I would have like to have asked Davis and Campbell why they were foreclosing on people when the tax dollars of people had so clearly bailed them out? Do they feel any responsibility for this bank caused economic disaster? Will they welcome regulation now to prevent a future disaster?

Since I could not ask Davis, I looked up the 2010 Fifth Third Bancorp Corporate Social Responsibility Report . It has a value of “fair and responsibility lending.” Reading further found some fluffy sound bites but the substance is Bancorp will meet commitments under the law for the Community Reinvestment Act for a “Satisfactory” rating and will do a few financial education programs, which is actually very pathetic. Any real responsible lending practices and foreclosure help is missing.

Davis has long been important in the financing industry. I think that we can hold him responsible for leadership that got us into this mess as this profile from Forbes shows:

Campell is a local leader at Wells Fargo. So I also looked up Wells Fargo’s social responsibility report. Well, it sounds very good:

As a responsible lender, Wells Fargo denounces and strictly prohibits abusive, misleading, or fraudulent lending practices…We believe in homeownership, and do all we can to keep people in their homes.
(Wells Fargo & Company Responsible Servicing Principles)

So what happened in implementation? 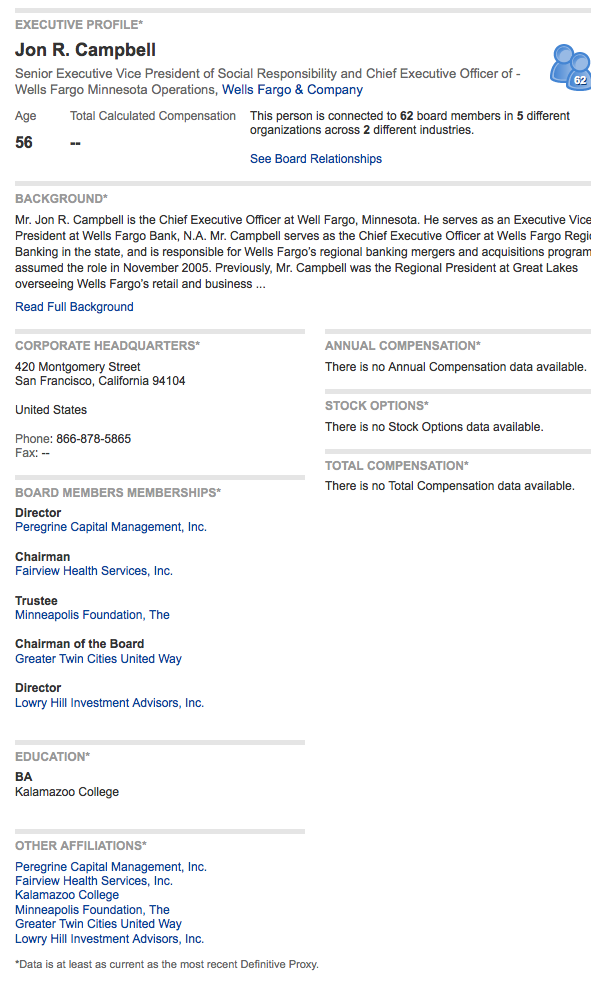 Giant photo heads were displayed in front of the hotel, so maybe someone will recognize these people and ask the important questions. So much pain and suffering has been caused by the decisions of bankers, yet not only were there no prosecutions, there were not even hard questions. The banks and corporations are bigger than most countries and perhaps the US no longer has power over banks. Maybe ordinary people can ask the questions that government can not.

Given my limited parking time, I could not stay and listen. However Kevin Whelan sent me this summary:

Sheronda Orridge, a Saint Paul homeowner, will speak at the rally about her long struggle to reach an agreement with Wells Fargo to redo an abusive loan. “I’ve done everything right and everything they asked me to,” Orridge said. “We need to hold the banks accountable.”

Orridge has owned her home in St. Paul since 1997 and has stayed current on her mortgage-even when her small business struggled in the economic downturn and even after her payment increased.  After she refinanced six years ago she noticed that despite making her payment every month, her loan balance kept going up.  She found out that she had a type of loan called a “negative amortization” that was considered so abusive that the Minnesota Legislature has since banned them. She has been trying unsuccessfully since 2009 to get Wells Fargo to redo her loan. 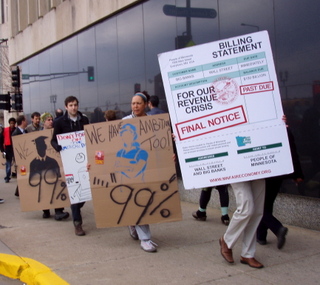 Earlier in the day activists passed out flyers to Chamber of Commerce meeting attendees asking them to raise Orridge’s case with Wells Fargo executive John Campbell.

Other speakers at the rally, Sunday Alabi, chairperson of Neighborhoods Organizing for Change (NOC) and Craig Dahlstrom, a Minnesota retiree who will talk about the devastating impact of budget cuts on seniors, schools and communities.

The rally is sponsored by Minnesotans for a Fair Economy, Minnesota Neighborhoods Organizing for Change (NOC) SEIU, and ISAIAH, and OccupyMN activists will join.

In October, hundreds of Minnesotans visited US Bank and Wells Fargo, delivered letters, and held marches in an attempt to secure meetings with the top executives of both banks to halt their foreclosure spree and to call for the support for good jobs.