Poor Americans are having a hard time reaching the middle-class and the middle-class is having a harder time staying middle class, according to a new report from Dēmos, a progressive public policy organization that focuses on issues pertaining to economic and political inequality. According to the report, “Today it is not only poor families but many middle class families who are furiously running in place. Millions are working hard to move forward, or just to make ends meet, and getting nowhere.”

The Dēmos report concludes that “In the aftermath of decades of increasing income inequality and of 2008 economic recession, the challenges and hardships facing lower-income and middle class Americans have grown more severe. These challenges make it harder to move from poverty into the middle class, and to experience middle class financial stability.” The increasing prevalence of low wage jobs without benefits is one of the major contributors to the plight of working Americans.

Unfortunately, Minnesota has not been immune to this trend. While the number of jobs in Minnesota is increasing, a snapshot of Minnesota’s second quarter 2013 employment situation shows that there are 155,000 job hunters competing for just 40,000 full-time openings. Furthermore, many of the job openings are for low-wage positions. Only 25 percent of the openings require a four year degree and only 42 percent require education or training beyond high school. Over half of all openings are in sales, service, or other low-wage positions that have a collective median wage of $9.35 per hour. Contrast this with the hourly wage per worker needed to support a Minnesota family of four (two children, two adults, both working) of $13.55 assuming employer-provided healthcare insurance or $16.14 with individually purchased insurance.

As illustrated below,* median earnings (which consist primarily of wages and salary from a job) in Minnesota have increased at a pace far below the cost of items that the typical working household routinely purchases, with the exception of clothing.† The overall Consumer Price Index (CPI) has increased at a pace that is more than double the rate of growth in median earnings. 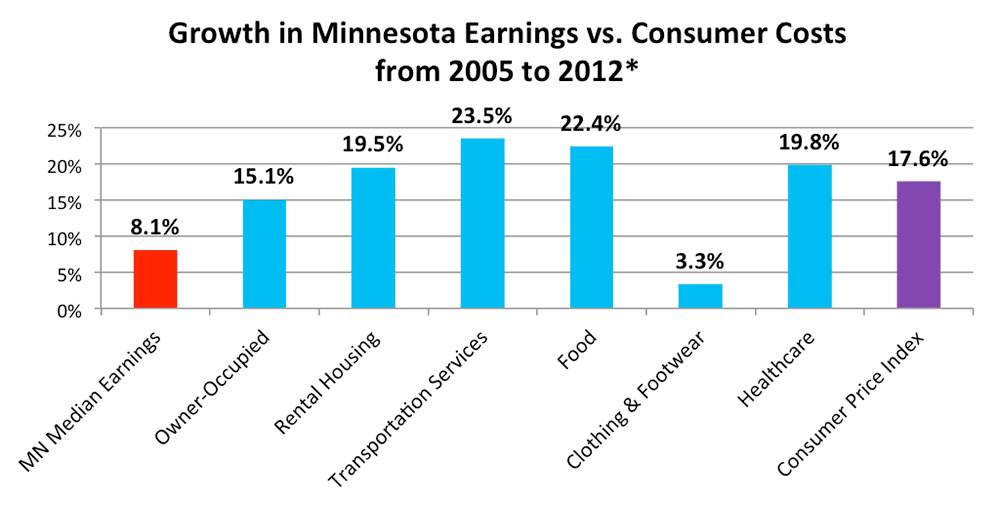 The Dēmos report outlines several policies that can help the working poor climb into the middle class and help the middle class achieve financial security. These include investing in education and worker training, reestablishing a social safety net, increasing the minimum wage, enhancing the ability of working people to organize and bargain collectively for better wages and benefits, promoting strategies that will promote asset building among low- and middle-income households, and regulating financial institutions to ensure more fair lending practices.

Minnesota made significant headway on several of these fronts during the 2013 legislative session. The FY 2014-15 budget made significant new investments in early childhood and K-12 education, which will help provide children from low- and middle-income families with the opportunities needed to get good paying jobs and achieve financial security. The new MNsure program will help families obtain affordable health insurance so that injury and illness do not result in financial ruin. The budget also makes investments in work training programs for adults and at-risk youths. Finally, progressive state policymakers enacted legislation that will give childcare workers the opportunity to vote on forming a union to organize and bargain collectively for better wages and benefits.

Other initiatives still await legislative action. After failing to reach an agreement during the 2013 session, the Governor and Legislature will reconsider a plan supported by a coalition of labor, religious, and non-profit organizations to increase the minimum wage to $9.50 per hour during the 2014 session. Raising the minimum wage to $9.50 would elevate the pay of low-wage Minnesotans to the inflation-adjusted level of the 1960s—an important step in helping these workers generate the resources necessary to move up rather than simply “run in place.”

Not all of the problems cited in the Dēmos report can be solved by actions at the state level. However, Minnesota policymakers have already made strides that will give low-income families a chance to move into the middle-class and middle-class families the ability to stay there. More still needs to be done to increase the minimum wage, strengthen the social safety net, protect consumers against unfair lending practices, and enhance the ability of labor to unionize and collectively bargain.

*In this graph, Minnesota median earnings (red bar) are based on individual earnings as reported by one-year estimates from the American Community Survey. Growth in the cost of specific items (blue bars) are based on price indices for personal consumption expenditures from the U.S. Bureau of Economic Analysis (BEA); “owner-occupied housing” is based on the imputed rent of owner-occupied non-farm housing; “rental housing” is based on the rent of tenant-occupied non-farm housing; “transportation services” includes motor vehicle maintenance and repair and public transportation costs; “food” includes food and non-alcoholic beverages purchased for off-premise consumption. The Consumer Price Index (purple bar) is from the U.S. BEA.