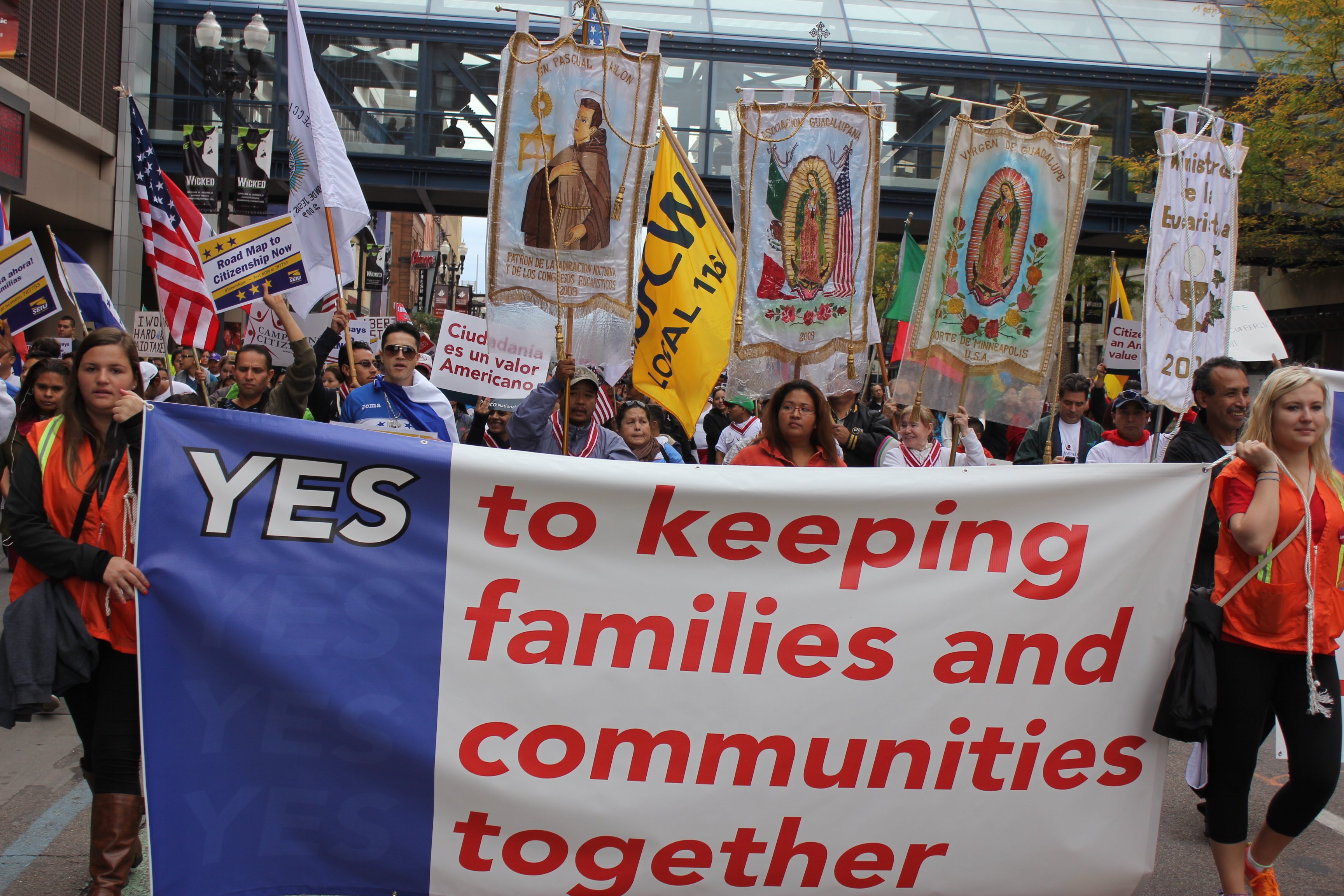 Holding banners that said “Now is the time” and “Citizenship for 11 million,” thousands of Minnesotans marched through downtown Minneapolis early Saturday afternoon to show their support for an immigration reform bill passed by the Senate and currently awaiting action in the U.S. House of Representatives.

Before the march began, the crowd gathered in front of the Basilica of Saint Mary. A group of Aztec dancers performed traditional Mexican dances while more than 20 buses dropped off marchers who had traveled from Northfield, Worthington and other cities outside the metro area to attend the event.

Religious leaders from several different faith groups led a brief prayer service on the Basilica steps before the march, each reflecting on the injustice of the current immigration system.

“We need legalized citizenship for all people and a process that keeps families together,” said Chad Gilbertson, pastor of Holy Trinity United Methodist Church in Prior Lake. “Regardless of nationality or status, we are united under the same God.”

After the service, the march began by heading straight down one side of Hennepin Avenue until turning on Sixth Street to arrive at the plaza in front of the Hennepin County Government Center.

Marchers filled the street, holding up signs and banners, and chanting “Sí, se puede” and “Justice now” as onlookers stopped to watch them pass.

After filling the plaza at the Hennepin County Government Center, speakers from diverse groups including the Minnesota Chamber of Commerce, the Minnesota AFL-CIO and several churches spoke. Several remarked that it was usual for the organizations they represented to agree on anything.

All said the time for reform was now and that they were hopeful that the immigration reform legislation which passed the U.S. Senate earlier this year will be passed by the U.S. House of Representatives yet in 2013.

In the crowd, Claudia Jimenez, a Northfield resident who legally immigrated to the United States 18 years ago, said that she, too, is hopeful that immigration reform will happen this year and she said it is long overdue.

“It needs to happen soon. It will make life better for my friends, for my family, and for the entire community,” she said.

Also in the crowd was Armando Martinez, who entered the United States 15 years ago, and does not have permanent resident immigration status.

“I pay taxes, I own my own house. I’ve lived in the Twin Cities for 12 years, but it’s not easy,” he said. “Reform would change a lot, and make it easier for us, especially my daughter.”

The march in Minneapolis was one of more than 100 held nationwide on Saturday to pressure Congress to pass immigration reform.

And, generally, stories on immigrants and immigration

And here’s more from people who marched on Saturday, via Storify. [If you don’t see the Storify photos and comments below, please refresh your browser window.]