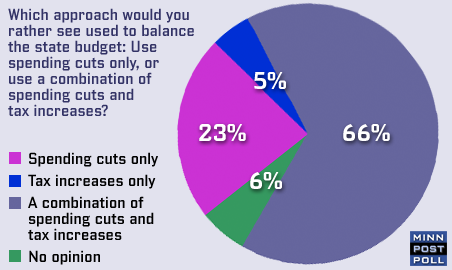 This finding is consistent with other polls.

Minnesotans support raising revenue when they understand what’s at stake. As Growth & Justice wrote in 2010:

Over many years, polls in Minnesota consistently have shown support for revenue-raising if the question is asked with even a smidgeon of context that reminds people what taxes pay for. Ask people point-blank whether they want to pay more in taxes, and they tend to say no. Ask them point-blank whether they want to slash investments in schools and roads and nursing homes, and they also will say no.

Unfortunately, the final budget deal was made up of spending cuts and timing shifts and other one-time fixes.

The legislative session is over, but the debate is not. We still have a mismatch between what our tax system raises and what it costs to fund our state’s priorities.

When two out of three Minnesotans support a balanced approach, legislative leaders should listen. They should do the right thing and create a sustainable budget — and a prosperous future — using a mix of spending cuts and new revenues, raised fairly.