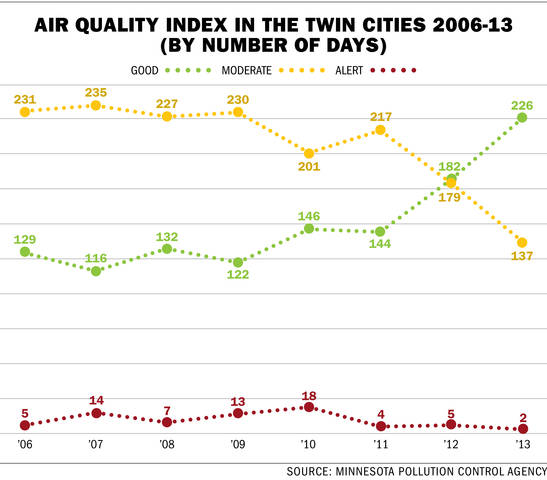 Earlier this month, the state pollution control agency announced a pilot program that aims to improve communication between Minneapolis’ largest pollutant emitters and residents amid concerns about the city’s air quality and fear surrounding its health effects.

Officials hope the collaboration, which is still in its early phases, will provide residents with more information on which facilities emit greenhouse gases and the effects of the pollutants.

The Minnesota Pollution Control Agency selected 12 of the highest potential greenhouse gas emitters in Minneapolis, including the University of Minnesota, to work together and reduce emissions.

“We’re trying to work with what data they have and what goes in their neighboring communities,” said Jeff Smith, director of MPCA’s industrial division. “We’re trying to build trust between companies and neighborhoods.”

Smith said he gets a lot of “passionate pleas” from residents and senses general frustration over the lack of communication from emitters.

So far, the MPCA has only met with the selected parties a handful of times, but Smith said the agency is ready to dive into the project.

The University hasn’t signed on to the MPCA’s plan, though it has been involved in energy conservation and reducing emissions for a long time, said Mike Austin, assistant director of industrial hygiene and safety at the University.

Most of the University’s emissions come from its heating plants, he said.

The University — which Austin said is considered a major source of emissions — hopes to reduce its overall greenhouse gas emissions by 49 percent by 2021. It recently announced plans to renovate a building in Marcy-Holmes that would save $2 million in heating and electricity costs each year.

Meanwhile, the city is about a year into its own air quality project, said Patrick Hanlon, Minneapolis’ supervisor of environmental services.

Instead of the MPCA collecting data on a regional level, like it normally does, the city is examining air quality at a neighborhood level by placing 100 air quality collectors at 72 locations.

Hanlon said the refined technique will make it easier to use data at a city level.

The city is also in talks with the MPCA to determine how to better engage facilities and residents.

“Any way we can be a conduit between both our businesses and community, we’re interested in,” Hanlon said.

Minneapolis is also attempting to get companies to use greener cleaning chemicals and watch what they emit, he said.

Hanlon said the city is still picking up trichloroethylene (TCE) in its studies of the Southeast Como neighborhood. The MPCA announced last year that it had found potentially unsafe levels of that chemical, which has been linked to birth defects and liver failure, in the area.

Neighborhood residents wonder if the air quality within the TCE-affected space is any different from the rest of the city, said Ricardo McCurley, director of the Southeast Como Improvement Association.

“We’ve had an uptick [of TCE], but otherwise it’s been going down a bit,” he said.

SECIA has taken an active role in monitoring the area’s air quality. The organization voluntarily purchased four air collector canisters on top of the ones the city provided, McCurley said.

The relationship between the neighborhood and nearby greenhouse gas emitters is already good, McCurley said. But he said the MPCA’s plan is still a good step.

Smith said he hopes the selected facilities that are the city’s highest potential greenhouse gas emitters will do their part to answer community questions. He said he’d like businesses to hold open houses and “take away some of the fear and mystery” surrounding their emissions.

But even though community members have expressed concern, the air quality in Minneapolis and in outstate Minnesota is very good overall, Smith said. And most of the city’s emissions come from cars and trucks, he said — not buildings.

Austin said the air quality around the University is relatively good, too. The school has also been able to add several buildings, like the Science Teaching and Student Services building, without increasing the amount of fuel it uses, he said.