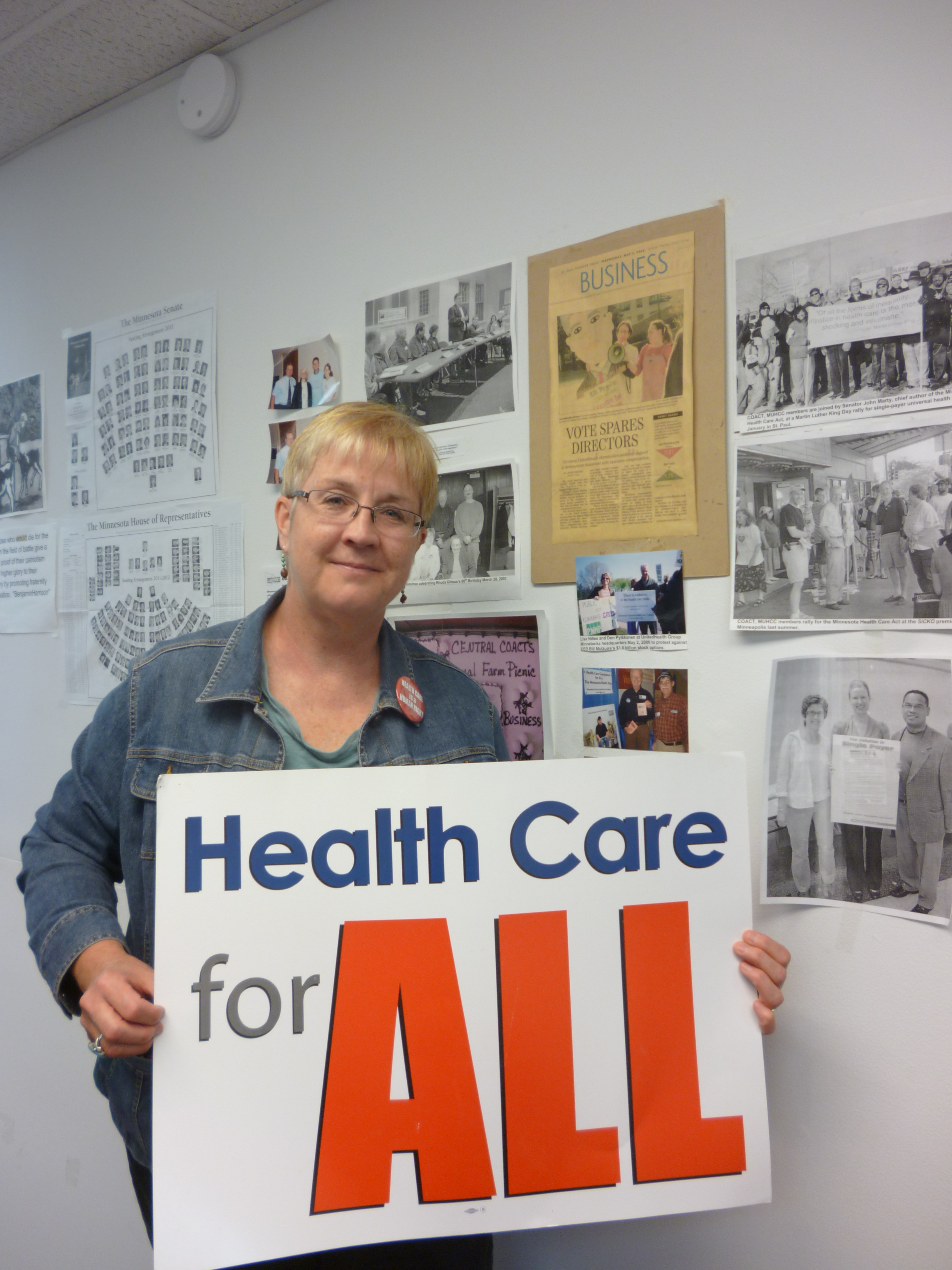 Ellen Lafans in the office of "Health Care for All - Minnesota".

I was in a hurry. I didn’t want to be delayed but the old man looked so desperate that I still stopped to listen. The old man told me that he was a Marine. He showed me his Veteran ID proudly, but then he said that he had broken his finger. He had no health insurance and asked me for money to get his finger fixed.

I was on my way to meet Ellen Lafans, also known as “Ellen, the Nurse,” who is fighting for single payer universal health care coverage.

I thought, “This has to be destiny,” that I experienced the complicated health situation first-hand on the day I would meet a woman who thinks that health care is a human right.

Ellen Lafans has met people who suffered a lot, because she has been a nurse for 35 years. She has seen desperate, hopeless people and she has experienced that people are dying because they have no health insurance. “Something like an ear infection can kill you, if you don’t go to see a doctor,” she said.

Lafans was born in Iowa, but moved with her family to Rochester, Minnesota when she was ten. Living in this city, where the worldwide renowned Mayo Clinic is based, she experienced how good health care could work.

In her 35-year-long career as a nurse in a Minneapolis clinic, Nurse Ellen never really questioned why people didn’t have health insurance. This was just the system: some people had health insurance and some did not.

Then, in 2004, she witnessed the death of her brother Rodger, and she got involved in the fight for health care.

Lafans, who had always had a very strong relationship to Rodger and cared for him a lot, will always bear in mind the last conversation they had.

Their last conversation was about Rodger’s fear of losing his health insurance. Right after that, he committed suicide.

“Eva, this conversation sticks in my mind, Eva,” she addressed me forcefully. I was impressed by this woman who opened up to me and told me her extremely personal story.

After her brother committed suicide, Lafans started to question the system and the powerful sources behind it. She started to get educated on this topic, gained a master’s degree in health system administration and encountered the organization, Health Care for All Minnesota. There she found wonderful people who also try to change increase awareness of the lack of health care for all.

Lafans throws around with these numbers, repeats them several times and uses long pauses. It’s as if these numbers are enemies she has to fight against and which should be engraved in everyone’s memory.

Her emphasis and repetition work. I won’t forget them.