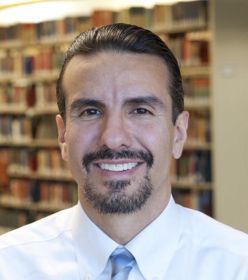 Anton Treuer had paid the repair bill and was headed to the lot to pick up his car when the mechanic called after him, “Miigwech!” For Dr. Treuer, a professor of Ojibwe at Bemidji State University, being thanked in that language by a non-native speaker represented a measure of progress. His mission is ambitious – to revive the indigenous tongue.

The local Target, a coffee shop, the hospital: 120 Bemidji area businesses now post bilingual signs. For tourists, the Ojibwe words make this corner of northern Minnesota a mite more exotic. For residents of the three nearby reservations, Red Lake, White Earth and Leech Lake, they signal renewed respect. In Beltrami County, relations between the groups have at times been strained. These positive developments are just what Shared Vision Bemidji, the group behind the bilingual poster campaign, had hoped to see.

In May, The St. Paul Foundation’s Facing Race initiative awarded a grant to the Bemidji Area Race Relations Council, a joint Indian and non-Indian effort. The funds came at Treuer’s behest, as a result of his selection for honorable mention in the 2011 Ambassador Awards program. The program recognizes the efforts of individuals to breech racial barriers. A spokesperson for The St. Paul Foundation, Rowzat Shipchandler, calls Treuer’s labors to preserve Ojibwe language and culture “a way to heal historical racism.”

Author, educator, linguist: “I wear many hats,” Treuer says. Children’s voices chatter in the background as we begin our telephone interview. He and his family have just returned from a trip. He spends much of his summer traveling to Native American communities, helping celebrate traditional Ojibwe rites. “Funerals, drum ceremonies, life ceremonies, naming ceremonies, I usually bring most of the family.”

Treuer describes himself as an “historian morphing into a language guy.”  He grew up on the Leech Lake Reservation. “It’s hard for non-native people to understand what it’s like to never learn about yourself.” He recalls asking his grade school teacher a question about Indians. “’Well, that’s who was here before,’ she told me. I remember thinking that’s who’s here right now!”

“That’s a big part of the achievement gap.” To illustrate Treuer points to an immersion school near Hayward, Wisconsin. Until third grade, lessons are taught only in Ojibwe. Yet, the school has a 100% pass rate on standardized language tests – in English. “They are among the highest performing schools in that state. Everyone should be perking up when a school has those kinds of scores.” These results are achieved he says, “by enabling native kids to learn about themselves,” to make a math lesson relevant by “measuring the volume of a birch bark canoe.”

Retooling a language with less than a thousand fluent speakers is no easy task.  Curriculum must be developed, books at all reading levels made available and the vocabulary itself brought into the modern era.

The Ojibwe Vocabulary Project, supported by the Minnesota Humanities Center, took-up that task in July 2009. Treuer was in the trenches. In sessions that sometimes lasted until midnight, elders identified words for calculator – asigibikiwebinigaans – and sticky-notes – egokesegin. While neither of these terms is likely to be widely adopted, I think “agwaabikidenaniwewaji” has possibilities.  It’s a verb that means to get one’s tongue stuck on cold metal, glass or ice.  Minnesotans could use that verb.

In fact, you probably use Ojibwe already. Mississippi is an anglicized version of Misi-ziibi, long river. Nouns derived from the native tongue include totem, toboggan and moose.

The language is verb-based.  “Unlike English,” says Treuer, “the roots of Ojibwe words are apparent within the words themselves.”  Derivation is clear but spelling is not, as evidenced by the multiple spellings of Chippewa, Ojibway, Ojibwa. Languages that lack a literary tradition are slow to standardize orthography.  As editor of Oshkaabewis Native Journal since 1995, Dr. Treuer has a hand in this too.

In 2010, The Library of Congress recognized Treuer’s book Ojibwe in Minnesota.  This year The Assassination of Hole in the Day was a finalist for a Minnesota Book Award.  His account of the death of the 19th-century leader is popular. A check of four metro library systems found that each had multiple copies.  All were out or on hold.

That fact, and his mechanic’s Ojibwe thank you, should assure Anton Treuer that his efforts are making a difference.  If he succeeds, it’s not just a language, a history or a culture that will be preserved, it is a worldview. Asked for an example, Treuer mentions an Ojibwe word meaning one who holds it all together.  The English translation is old woman.