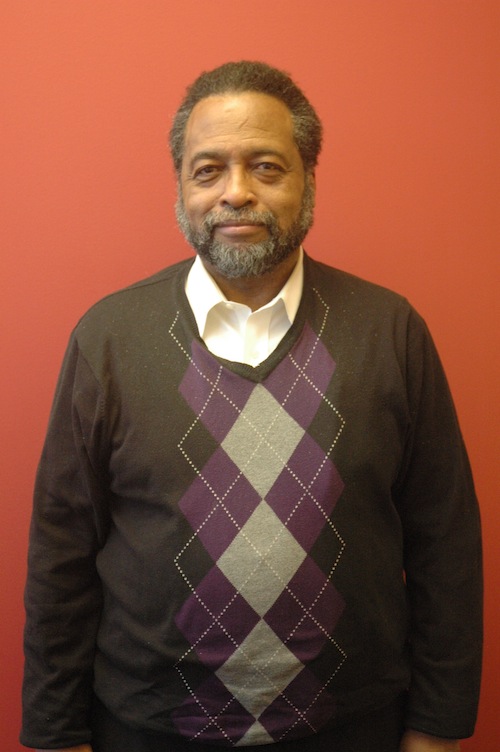 Meet Carl Griffin — writer, community advocate, philanthropist, bicyclist, classical pianist, and much more. A gay, African American man, Griffin has spent a lifetime caring about social justice, from his days as a Minneapolis Tribune reporter to his work in the nonprofit world, where he is now the manager of communications and volunteers for the Plymouth Christian Youth Center and the Capri Theatre.

Griffin grew up in the Rondo neighborhood in Saint Paul, a once vibrant African American community before it was split in half by the construction of I-94 in the 1950s and 60s. Griffin was in grade school when his neighbors began being moved from their homes, sometimes forcibly, to make way for I-94. Houses were moved, or torn down. By the time he was in college, the freeway, which was now across the street from his home, still had not been completed.

Griffin lived on Rondo Street, which is now called Concordia. The street “was the hub of that community,” Griffin says. During almost his entire youth, there was the constant dust, and noise of the construction, but it got even worse after he went to college at Moorhead. “They didn’t have barriers,” he says. “We’d have to close our windows. We couldn’t hear ourselves.”

Griffin remembers coming back to St. Paul, after he graduated from high school in 1965. “It was like a war zone to me,” he says. “The homes of old neighbors and friends that were no longer there. It was sort of like a fabric of the little block had been ripped out.” Many of his neighbors moved to other parts of the city, and others moved to Maplewood, Griffin says.

The experience of seeing his community ripped apart led Griffin to see the importance of social justice, a value he has carried with him throughout his life. When not at work, Griffin pursues his social justice interest, such as his work with Headwaters Foundation for Justice, where he was the co-chair for six years. “Groups in the areas of social justice bring folks to the table for social change,” Griffin says.

Two years ago, Griffin was given an award by the Headwaters Foundation for his philanthropy and activism. Griffin says he was shocked when he found out that he would be given the award. He was taught by his parents to give back to the community, so for the past 10 years he has set aside money each month for the foundation in addition to his contributions to the United Way. “It’s not that big of a deal,” he says. “I’m fortunate that I’m able to do it.” Griffin is particularly interested in helping his old neighborhood, and was struck by the timing of the award, as Rondo is once again in the midst of upheaval from a transportation project, this time the construction of the Central Corridor light rail.

Griffin was also hugely influenced by all of the political and social change that was happening in the 1960s. “So much was happening,” he says. “As a kid I had impressions. I know it influenced me greatly.” He became involved in the NAACP, and participated in racial equality groups in high school, at Central. He joined picket lines to protest George Wallace, and attended rallies in the summer of 1962 to support the Mississippi Summer. “I remember how angry I was looking at the newspaper, seeing those dogs biting the stomachs of children who were resisting segregation,” he says.

At home, as people in his neighborhood were forced to move away, he saw how most black people who could afford to buy homes in other neighborhoods were not allowed to.

In college, Griffin wrote for his college newspaper, where he got into trouble a few times, he said. “Back in those days the four letter word was a big thing,” he says. “It was a good education for me about freedom of speech.”

Griffin eventually moved back to the Twin Cities and ended up writing for the Minneapolis Tribune, where he was a general assignment reporter, covering a range of subjects such as city hall and community issues. Sometimes, Griffin found it difficult to stay neutral on all the issues. At times, he says, he just wanted to help people he was writing about. “It’s the whole thing about being fair,” Griffin says. “I guess at times I thought, ‘Gosh I wish I could help these people.’”

Griffin came out to his friends in college, and has been with his partner for 43 years. They went to some of the first marches in Loring Park (before it became what it is today, he says) back in the early 80s, and worked briefly on fundraising for Clare House

As an African American and a gay man, Griffin has seen discrimination on both sides, although one is overt while the other covert. “My skin says it all,” he says. He’s had plenty of experiences with overt discrimination — not getting jobs, for instance. But as for being gay, “it’s kind of weird,” he says. “You hear people saying things about gay people and they don’t know you are gay. You have a choice to say something or not say something. I’ve chosen to interrupt their thinking process.” When Griffin worked for the Tribune, he was influential in the newspaper including gays and lesbians into their anti-discrimination policy.

After reporting for thirteen years, including eight years at the Tribune, Griffin finally decided that he needed to move on to other things. He had been joined the board of the African American Cultural Arts Center, and was really excited about what they were doing, and he realized that he wanted to be more of an advocate. After writing grants for the AACAC, he worked for the Red Cross for nine years, while they opened a branch in North Minneapolis and at Sabathani Community Center. He’s worked for PCYC since 2000.

The other important part of Griffin’s life is music. He started piano lessons when he was six years old. He had a short break from 4th-6th grade, while he played clarinet in band, and sang in choirs, but he realized in seventh grade that he wanted to play piano again. He found a phenomenal teacher, and studied classical piano. He didn’t share his love of classical music with many people, though. He worried that they would think he “wasn’t cool.” He continued playing piano into college, but he says the timing wasn’t right for a career in music. It took longer to complete a degree in music, and at the time, he was getting more encouragement to go into journalism.

In the 70s, his parents told them that they wanted their space back from where his piano stood, and they sent it to Griffin. He started playing again, but the piano had fallen out of tune and he didn’t have time to play.

Then, two years ago, Griffin’s partner told him he was secretly trying to figure out a way to pick a piano keyboard. “I had to ask myself… am I serious enough?” Working at PCYC, he’s interacted with many wonderful musicians and artists that gave him a lot of inspiration. He asked permission to use the Capri Grand piano, and began practicing, to see if he really wanted to do it.

He ended up getting a Yamaha P155, on the advice of Rick Carlson, from the Wolverines. “Now that I’m back to piano I feel so completed,” he says.

Griffin doesn’t regret the path he chose. The writing path taught him discipline, the process of writing a draft, and then going back to it with patience and diligence, and, he says, “It’s no different for the piano.”