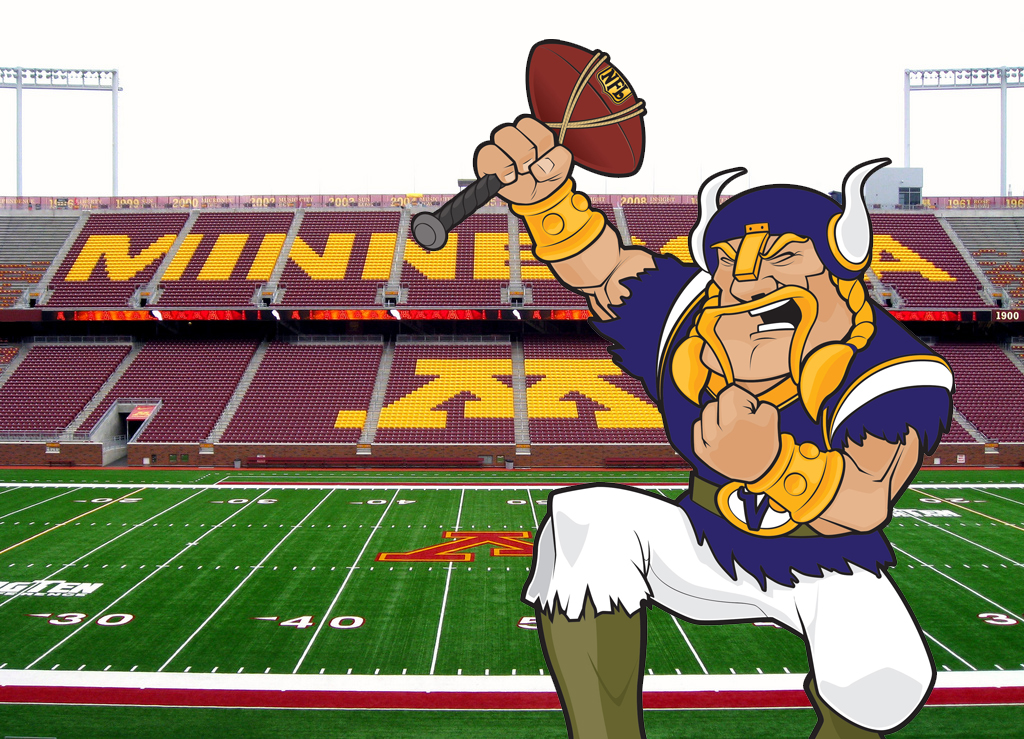 In fall 2014 the Minnesota Vikings will move into TCF Bank Stadium just as the Minnesota Gophers did three years ago—but the professional team’s impact on the surrounding neighborhoods could be greater than the stress created by the home college team, and the Vikings have not yet agreed to a plan to compensate for the impact on the surrounding neighborhoods.

Five Vikings officials met recently with two University-area representatives as part of ongoing negotiations to determine how they will prepare the neighborhoods for the invasion of professional football.

The Gophers, with help from the Minnesota Legislature, brought a $1.5 million endowment to create a Good Neighbor Fund to mitigate the impact on the “stadium area” that covers all the neighborhoods surrounding the University of Minnesota.

The Vikings are likely to contribute to the Good Neighbor Fund, but neither of the neighborhood representatives—Ted Tucker of Marcy-Holmes and Stephen Banks of Prospect Park—will say what amount has been discussed.

Tucker and Banks will advise the University of Minnesota on the appropriate amount of funding that the University should seek in their contract with the Vikings.

The actual decision makers—Vikings authorities and the University’s general counsel’s office—did not return phone calls for this report.

Although the Vikings may start this coming season in the TCF Bank Stadium, they have not yet signed a contract with the University. The next meeting of the Board of Regents will be May 9 and 10, and the stadium is not yet on the agenda.

Tucker, who is chairman of the University District Alliance of neighborhoods surrounding the Minneapolis campus, reported to Marcy-Holmes last June that the Vikings will deal with the community through the Stadium Area Advisory Group (SAAG) that meets periodically to discuss issues.

Tucker said the Vikings will provide mitigation support to SAAG’s Good Neighbor Fund and educate Vikings fans about using the LRT to get to and from games. But he did not reveal the substance of discussions since then.

Tucker said the neighborhoods supported the stadium on condition that it would host a maximum of 12 major events a year, eight of them being Gopher games. The Vikings would add at least 11 more games for each of the two or three years.

The Vikings games are even bigger, putting additional stress on neighborhoods than Gopher activities. “The general gist is that the Vikings playing at TCF will have more stress than the Gophers have,” Tucker said. “We’ll partnership with this as we do with the Gophers. SAAG is there to talk about not only the Good Neighbor Fund but more generally the operations and hash out the terms.”

The Vikings should also help pay for game-day expenses, including traffic control, crowd control, parking, livability issues, lines to get on the interstate highways, and other inconveniences, Tucker said.

“’Stay tuned’ is all I can say,” Tucker said. “Discussions are under way. We’re trying to figure out what works for the various groups.”

“We cannot anticipate what the impacts are in terms of light, noise, fan behavior, that sort of laid the model—[the] Vikings [are] using our neighborhood as their venue, so why shouldn’t the neighborhoods have way of addressing the wear and tear on their quality of life?” Banks said.

“Our position is that in the same way that the Minnesota Gophers organization provides funding for ongoing mitigation efforts, so should the Vikings,” Banks said. “I hesitate a little bit in talking because those negotiations are ongoing and perhaps somewhat sensitive. This isn’t national security or anything like that, but we’re trying to get a deal done—I’m not sure the where the Vikings are on the thing.”

“Some people were pretty upset at both SAAG and the University of Minnesota over the quality of life thing,” Banks said. “How much traffic and drunken fan behavior can you stand? That’s not what you signed up for when you bought your house, I don’t think. It gives neighborhoods some redress of direct stadium impacts. We address neighborhood problems.”

Other people welcome the Vikings with fewer reservations.

Skott Johnson, president of the Dinkytown Business Association, said that the stadium has been almost too efficient at getting fans to and from the Gopher games.

“Dinkytown welcomes them to the area,” Johnson said. “We wanted them to come and spend the day with us—to have breakfast, go to the game and stay for dinner. But it hasn’t worked out that way.”

“We have seen how well things have gone with the stadium and the Gophers. There are not nearly the arrests they had at the Metrodome. Traffic has come and gone easily,” Johnson said. “I have all the confidence we are going to control the Vikings as well. It’s a great system with the parking lots down there.”

Local business owners are exploring options for encouraging football fans to stay and enjoy the neighborhood. “We’re looking at what could we do, perhaps add a bus with a circular route from the stadium to Dinkytown and back. We’d like to get that business and not to have it leave.”

Last summer before discussions began, State Sen. Kari Dziedzic, DFL-Minneapolis, agreed there were many issues to work out but she encouraged the neighborhoods to invite the Vikings.

“Many people don’t know what a great place this is,” she said, gesturing at the riverfront in front of Wilde Roast Café. Even if they don’t stay on game days, visitors will return to the community once they discover the riverfront, Dinkytown, and the local businesses.

A year ago, the Marcy-Holmes Neighborhood Association expressed its reservations about a Vikings move into the TCF Stadium.

In a letter of April 4, 2012, Vikings fan and MHNA President Douglas Carlson reminded Council Member Diane Hofstede that the neighborhood through its long-range plan adopted by the city opposed a Vikings stadium in the area and tailgating in the neighborhood.

Carlson proposed a $1 per ticket “neighborhood livability surcharge” to go into a fund to improve the quality of life in the stadium area.

Carlson predicted bigger crowds, more attention and congestion with NFL games and national network broadcasting than the neighborhood sees with typical college games. “We are also aware of the problems experienced by the Metrodome’s residential neighbors when tailgating was permitted in parking lots around the dome,” Carlson said.

University Avenue is already congested on game days when broadcast vans and trucks park on side by Williams Arena and cars are lined up for the parking ramp on the other side, Carlson said.

A right-turn lane should be returned to 10th Avenue at the intersection with University at the end of the 10th Avenue Bridge, he said. “Another problem is traffic that backs up to a standstill as cars leave the stadium area on Fourth Street Southeast and head to 10th Avenue or I-35W,” he said.

He also called for more and better permanent trash containers throughout the neighborhood. “The city-provided containers are always overflowing and graffiti-covered. This reflects badly on our community,” he said.

Current University rules and policing of tailgating should remain and not be expanded, he said. “Our neighborhood has suffered greatly because of alcohol-related behavior, as evidenced by three riots in the past decade. Two of these were related to sporting events.”

Additional parking and increased enforcement should be provided before the Vikings begin to play here, he said.

“We continue to experience cars parked too close to corners, which creates dangerous situations for bicyclists and cars turning. Game day parking pressure—people cruising for free parking in the neighborhood—[has] a detrimental effect on residents’ health and quality of life.”

Correction: When originally published, this story said that the Vikings would be moving to TCF Bank Stadium in fall 2013. In fact, the move will happen in fall 2014. The error has been corrected.