With more than 20,000 job openings and the nation’s lowest unemployment rate, North Dakota is desperately seeking skilled workers to build infrastructure that keeps pace with its oil boom. Despite the conservative state’s laws unfriendly to organized labor, six Minnesota-based trade unions are stepping up to help.

The unions launched the Dakota Construction Careers Campaign, which will conduct 12 open houses for job seekers in both North Dakota and South Dakota, another low-unemployment, anti-union state. “The work is so plentiful we don’t have time to be picking a fight over that,” said Robb Leer, spokesman for the campaign. “We’re just asking people to give us a chance to provide them with training and a good career.”

“A few years ago we had hundreds of members sitting on the bench,” Laborers Local 563 business manager Tim Mackey said in a news release. “Now we’re looking at a couple of decades worth of work for skilled labor from construction owners who want their projects built to specs, on time and on budget.” 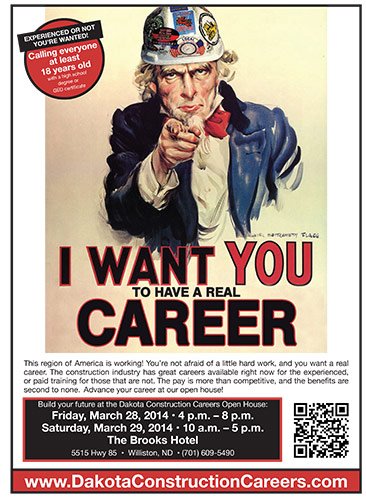 In North Dakota alone, 76,000 more jobs are expected to be created by 2020. The unions’ recruitment efforts will complement another announced this week by the state government and business interests.

Interestingly, though, new workers attracted and trained by the unions won’t be required to join up because of so-called right to work laws in both Dakotas. The AFL-CIO calls these laws — on the books in 24 states, not including Minnesota — “right to work for less.” Its policy brief notes that states with these anti-union laws have lower wages and household incomes, less health coverage, less investment in public education and higher rates of poverty, workplace death and infant mortality.

I’d call these laws right to free-ride on the backs of unionized workers, typical of a conservative bias toward organized capital (corporations) over organized labor. Sometime I’d like to see a “right to invest” law that would allow me to collect dividends without buying the company’s stock, a pretty good analogy for what right to work promotes.

Still, our unions deserve praise for overlooking inimical public policies west of our borders in favor of common interests in public works done by well-trained workers. Maybe they’ll get some voluntarily dues-paying members for their trouble, or even a growing constituency to put to rest “right to work for less.”