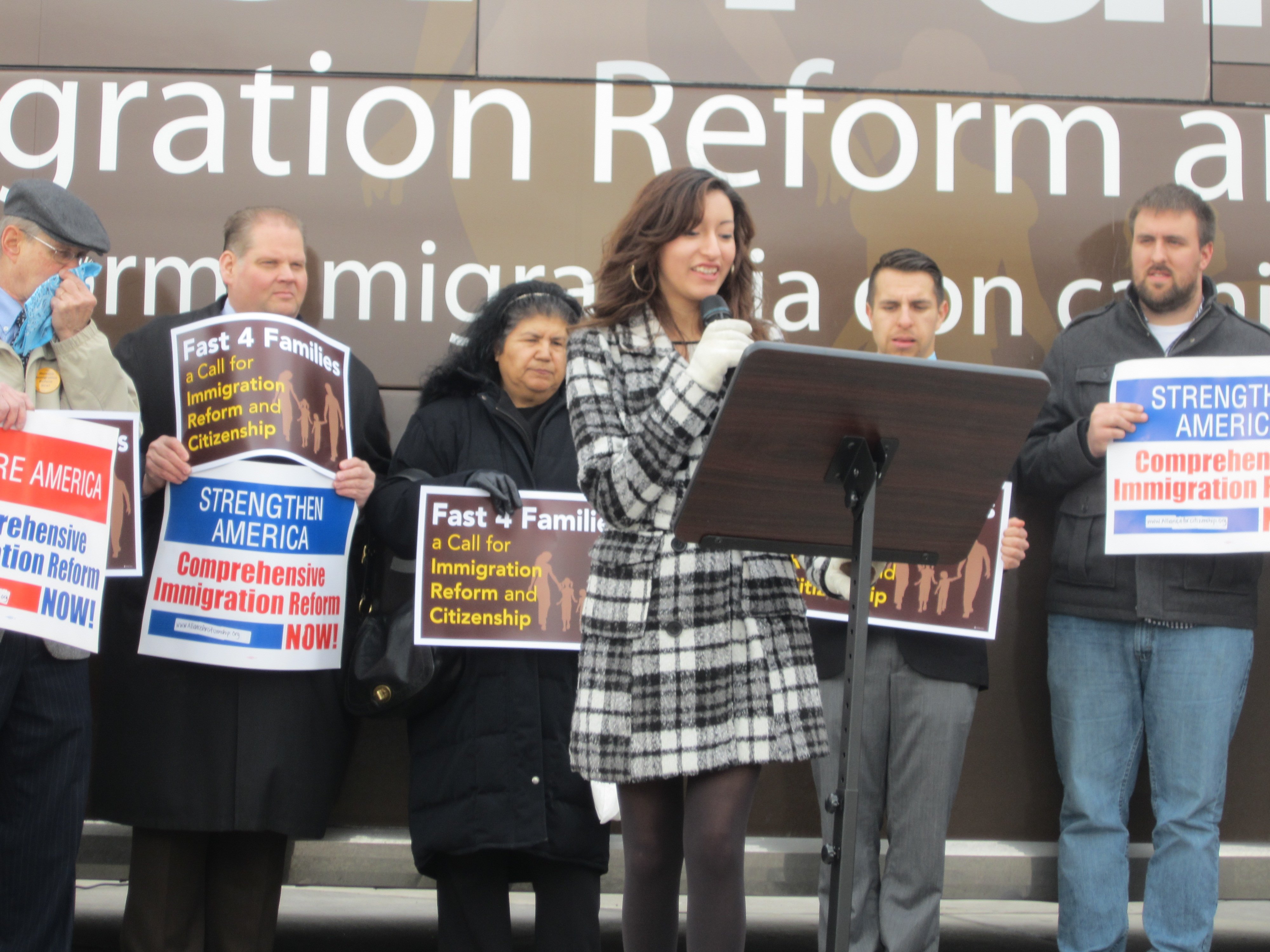 “Kids need to step up because if you don’t step up, no one is going to hear what you need to say,” said Karen Velez. “That’s why I’m here, talking about what I want to do in life and how we should get a chance to enlist in the military. Things should change.”

On March 14, the 17-year-old from Apple Valley rallied with the “Fast for Families” immigration reform campaign on the front steps of the Minnesota Capitol. The campaign is composed of faith, labor, civic and immigrant rights leaders on a 100-plus stop bus tour around the nation. The advocates, to bring attention to overdue legislation for national immigration reform, abstain from food for one day a week. Their bus tour follows a 22-day fast last November and December on the National Mall in Washington D.C.

Velez visited the National Mall during last year’s fast and talked to national leaders on immigration. On Friday, she spoke at the “Fast for Families” rally, alongside Sen. Jim Carlson (DFL-Eagan) and national Fast for Families leaders. She and others also fasted for the day, eating nothing and drinking only water. They called on U.S. Rep. John Kline (R-Lakeville) to urge House Speaker John Boehner and House leadership to support comprehensive immigration reform. They also pressed the Minnesota Legislature to pass H.F. 348, which would allow all Minnesota residents, regardless of immigration status, to obtain a Minnesota driver’s license.

Velez came to the United States when she was three years old. In 2012, she became a “Dreamer,” a term used to describe enrollees of the Deferred Action for Childhood Arrivals (DACA) program. The national program provides undocumented people who emigrate from other countries before the age of 16 the chance to stay in the United States for two years, after which they can renew their temporary legal status under certain requirements. More than half-a-million young people around the nation have become “Dreamers” since the program’s inception in 2012.

Velez is now in her senior year at Eastview High School in Apple Valley, going off to college this fall. Her mother works at a store and her father, once employed by the Mexican Air Force, is a janitor with a cleaning company. She also has an eight-year-old brother who goes to Green Leaf Elementary.

This interview took place before her day of fasting and the rally at the Minnesota Capitol. “Minnesota is my home,” she said. “I love it.”

How did you first involve yourself on immigration reform?

I guess I first involved myself because my cousin works at the Immigration Law Center. I really wanted to make a change about the military and our status. My dream is just to go to college and go into the Navy, to make a difference in the world and show everyone that your dream can come true. When I was a little girl, I never thought that I’d be at this point and going off to college and graduating this year.

So you’re going off to college this fall?

Do you know what you want to study?

How do you think the politicians should go about immigration reform?

I honestly think they should legalize. They should work on a program to legalize families. I think that would be the best idea, or at least just have a program like the DREAM Act. There are a lot of people out there that really want to be here and that really want to work hard. If they don’t do a program, people are not going to be stopped from coming here. They see the U.S. as a dream-come-true. The United States is my country. Minnesota is my home. Me joining the military, that would mean so much to me because I would be serving back everything I’ve done here. It would be an honor.

A lot of people don’t see the positive outcomes of immigrants or their children.

Honestly, I’m not the only one that wants to go into the military. I bet you there are a thousand kids who want to join the military and that’s what they want to do. If they don’t let us reach our goal…honestly, for me right now, I feel really stuck. I’m a senior in high school and my dream was to go into the Navy right out of high school.

Have some of your friends been granted “Dreamer” status?

One of them is my god-brother and he is still studying at the same school as me. He’s a junior. he wants to go off to college. Another is my mom’s friend’s son. He wants to go off into the National Guard but he can’t. He has the same issue as me. He’s still stuck. There are a lot of kids with the DREAM Act that have been successful with it. I know there are a ton of kids studying right now and working hard for what they want to do.

What can people do to get involved and help out with this issue?

One of the things I remember talking to with Obama’s immigration staff [when Velez visited Washington D.C. last year for the “Fast for Families” National Mall protest]… is that kids should start sending messages to John Kline or the Republicans and start telling them our stories, how we grew up here or how this is our home. Kids need to step up because if you don’t step up, no one is going to hear what you need to say. That’s why I’m here, talking about what I want to do in life and how we should get a chance to enlist in the military. Things should change.

It sounds a lot like you’re doing this, in particular, for a lot of kids your own age.

Yeah, at first I didn’t realize it until I talked to one of my teachers. It just feels good I stepped up because there’s a ton of kids that don’t. I really want to enlist. I never give up on something I want and people know that at my school. I’ve had a big change in my life, ever since I got the DREAM act in 2012. When I got it, that did change my life because I actually saw a future for myself.