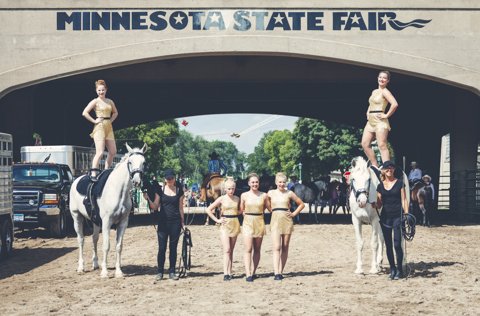 The Minnesota State Fair has one of the premier horse expositions in the Upper Midwest and all events are free with gate admission. Each year, the Fair offers new features to the horse show.

New to the 2014 State Fair was the Northern Lakes Vaulters and Gaited Horse Demonstration at the Warner Coliseum Aug. 24. The large audience was in awe watching graceful gymnastic aerial moves on the back of a trotting horse.

Gymnastics looks difficult enough on a sturdy, steady gymnastics floor, but to see gymnastic movements recreated on the saddle of a moving horse is a wonderment and an admiration for both beast and performer.

Equestrian vaulting has been an international sport since 1983 and it involves the rider, either as an individual or as part of a team, performing gymnastic exercises on a lunge horse who is being controlled by the lunger, according to the Equestrian and Horse website.

Northern Lakes Vaulters coach Elizabeth Whillock said the State Fair demonstration was to show people what vaulting is all about. “In Germany, you learn to vault before you learn to ride. You would learn to balance before you go on a saddle. [In the United States] most people learn to ride before learning to vault.”

The award-winning Northern Lakes Vaulters performed compulsories and individual freestyle. “The compulsories teach the rider balance and strength. An individual freestyle is a one-minute routine choreographed to music. A freestyle vaulting routine may include mounts and dismounts, handstands, knelling and standing and aerial moves such as jumps and leaps,” said announcer Rand Whillock. 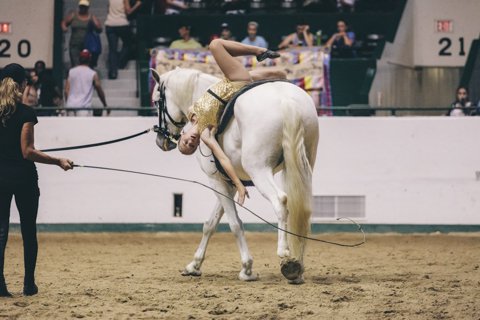 Graceful and fun to watch, the demonstrations involved two horses, Parry and Iceland. Parry has been vaulting for ten years while Iceland was new to vaulting. Parry, lunged by Emma Dalzell, is a 16-year-old Dutch Warmblood and is 16.3 hands high. Iceland, lunged by Chris Vint, is a 12-year-old Percheron Appaloosa Cross and is 17 hands high. “Any horse can be a vaulting horse. There is no set size or breed that you need for vaulting. The horse needs to be at least five years old, an adequate size to carry the vaulter or vaulters on its back, needs to be able to lunge, have a steady gait and a calm disposition,” said Rand.

The five vaulters getting on and off the horses at the State Fair are part of the12-member Northern Lakes Vaulters club. While the vaulting at the State Fair was a demonstration, vaulting is an artistic riding discipline and is a competitive individual and team sport. During freestyle competitions, both rider and horse are judged.

“Vaulting started when humans began riding animals. Long before we had saddles, humans had to vault on,” said Rand. “Early human stone paintings depict horses with persons standing on them.”

Vaulting was widely used in early military days and many soldier’s lives were spared because he was trained to vault back on his horse after he was unseated in battle and he was able to ride and fight at the same time, according to Rand.

The riders did not have the use of helmets as they performed their horse gymnastics. Rand said that vaulting is the safest equestrian sport. “Our accident rate is lower than golf and is the only equestrian sport that has never had a riding fatality in its history.” 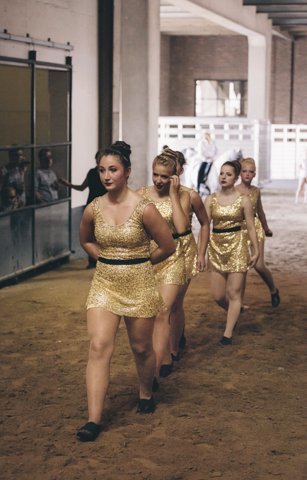 (Above) Performers from the Northern Lakes Vaulters club enter the Warner Coliseum. 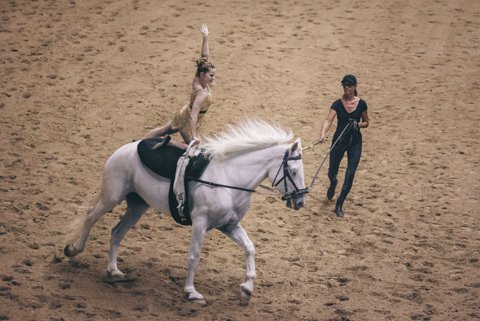 (Above) The award-wining Northern Lakes Vaulters was a new feature at the Minnesota State Fair Horse Show. 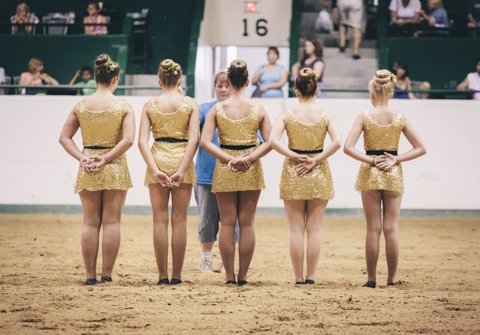 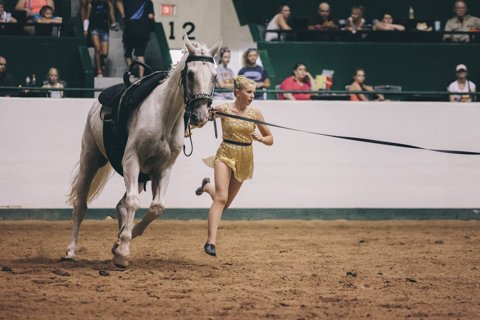 (Above) In equestrian vaulting, the rider is in harmony with the horse. 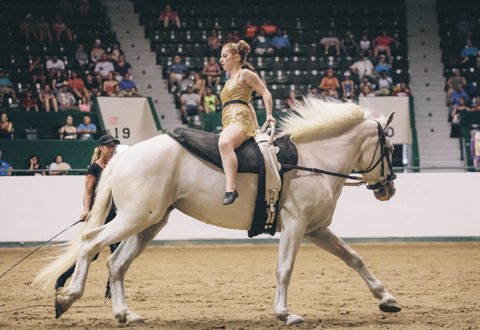 (Above and below) Vaulting has two components: compulsories and freestyle. 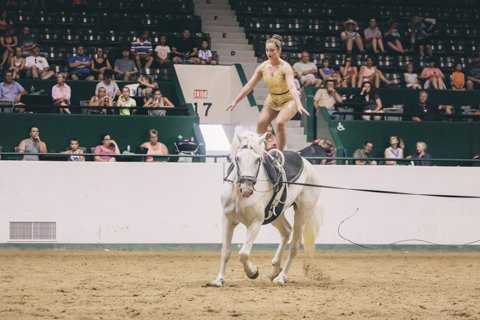 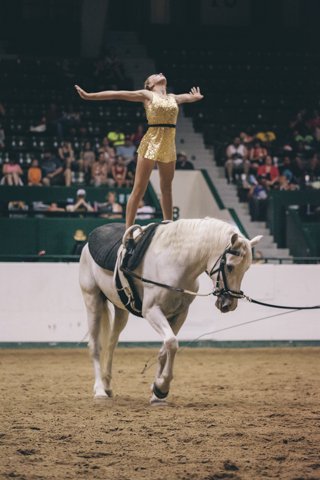 (Above) Both rider and horse are judged in equestrian vaulting competitions. 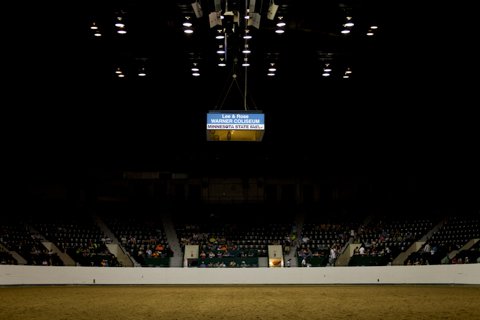 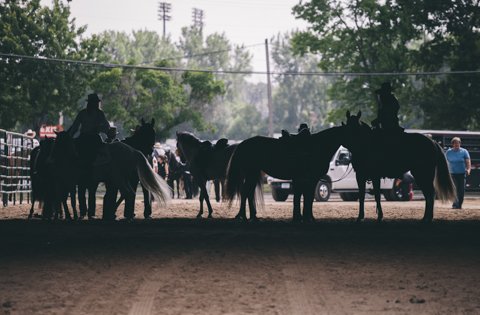 (Above) Horses and riders warming up for a State Fair horse show. 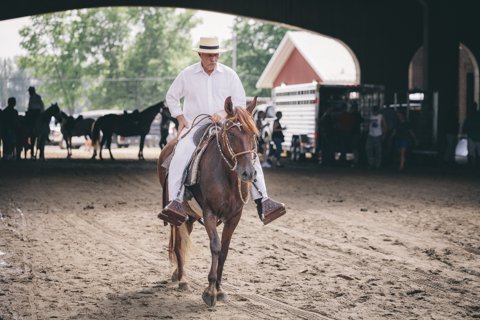 (Above) A Peruvian horse demonstration followed the equestrian vaulters. 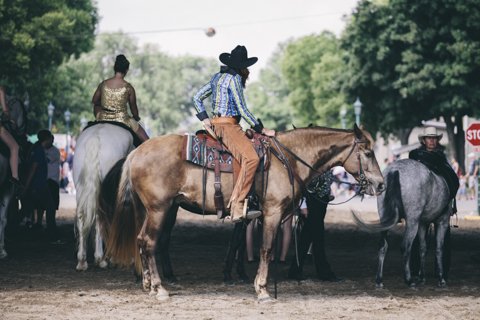 (Above) Vaulting and Rocky Mountain horses wait their turn outside the Warner Coliseum.