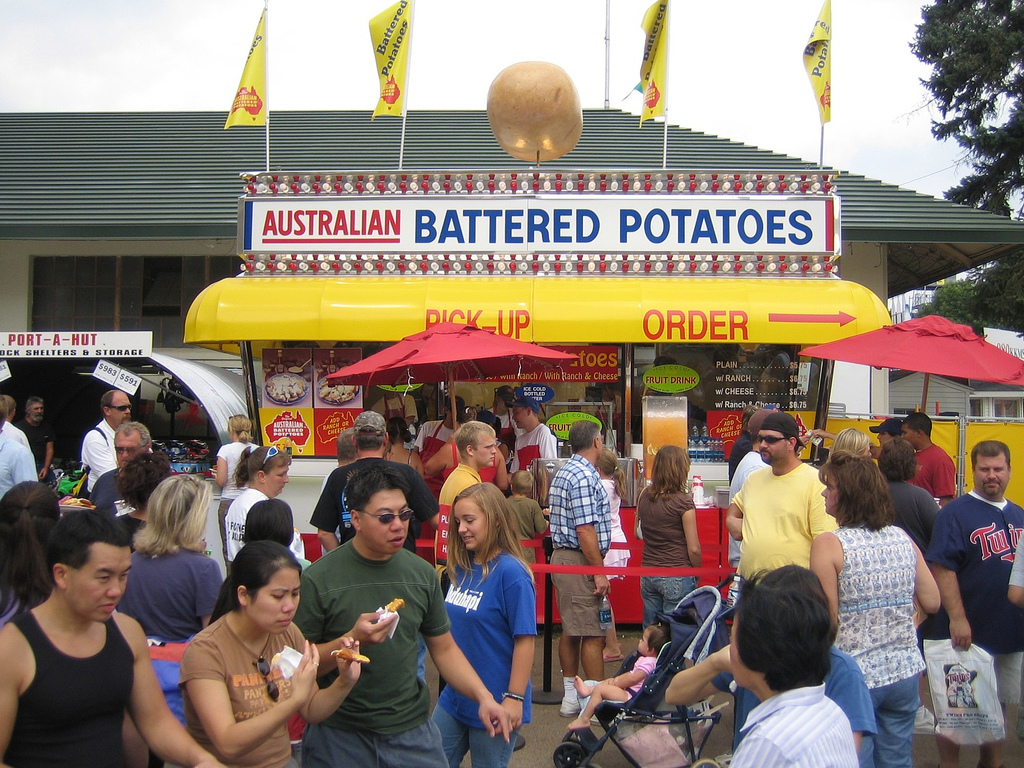 I never visited the State Fair during my first couple years in Minnesota because I had no idea what a state fair even consisted of. When I was introduced to “the Great Minnesota Get-Together” by a college boyfriend who never missed it I, too, became a yearly fairgoer.

A couple of years ago my parents came to visit from North Carolina in September so that my mother could attend the State Fair. Sadly she decided that once was enough and hasn’t been back. I’m of the opinion that once a year is enough, though I have a number of friends and acquaintances who spend more than five hours a year with a herd of Minnesotans, deep-fried everything, and piles of sticky children.

This year I went with the same friends with whom I traveled to Montreal. If they will eat seal and bison tongue, they will eat deep-fried butter on a stick. (I’m not sure they actually have that at the Minnesota State Fair, but I know they have it at some fair or other!) Like last year, I printed our 2012 Minnesota State Fair Bingo cards (updated yearly by Bill Roehl) and we each picked one from the stack. While in line for the park-and-ride, a family asked what we were looking at so I gave them three or four of my leftover bingo boards so they could play. I’m not sure if all of their kids knew what a camel toe was, but I’m assuming they do now.

This year and last, Minnesota State Fair Bingo was one of my favorite parts of the fair. I like to win, and there’s nothing quite like a competition to get me checking out a whole pile of front butts, comb-overs, and moose knuckles. When Phil was staring at every chest that walked by to identify a man with bigger boobs than the woman he was with, I realized just what a gem this State Fair Bingo is. My love for Minnesota State Fair Bingo inspired me to complete another activity that I’m rather fond of…making a pros and cons list! So, without further ado, here it is/

THE DEEP FRIED COOKIE DOUGH! (Eat this. No, seriously. Really, it is DELICIOUS.)

Beergarita. (I continue to like this even though every year I expect not to.)

The corn. OMG the corn.

No kids on leashes. (They have apparently gone out of style. This makes State Fair Bingo more difficult.)

All of the slow people in the world.

Stupid crap on a stick—i.e. deep friend fruit on a stick, cuz…seriously?