You have to give the Minnesota State Fair credit for keeping up with technology and social media. When the State Fair opened in 1854, the focus was on farming and agriculture. Now, you can hear recorded history naratives from your cell phone (or any land line), use your smart phone to locate QR codes, or brush up on State Fair trivia while you shuttle to the Fair’s gate.

“We want to meld the 150 years of the State Fair with current technology to make it accessible to all,” said Lindsay Dickson, State Fair Foundation Annual Giving Manager.

New this year, fairgoers can hear sounds of the fair’s past on a cell phone tour. By calling (877) 411-4123 while at the fair, or from home, you can listen to Minnesota State Fair history through fairgoers’ personal memories.

There are 12 stops. Tour stop 3, for example, tells the tale of Fairchild, the State Fair gopher mascot. Fairchild always used to carry a ticket in one hand until a powerful storm blew it away: “If you look around to the south side, you can see the fly-away ticket still attached to the booth,” explains the tour brochure. Fairchild’s ticket stand is now the sound booth for the Leinie Lodge stage.

Dickson brought me on part of the self-guided tour. We found Fairchild’s broken fly-away wooden ticket where it landed the day the storm hit in 2007. She told me many families gather for annual photographs with Fairchild, who turns 45 this year.

The Cell Phone Tour, and its newly installed signs with the QR code, will remain available year-round, said Dickson. “We have over 100 events on the fairgrounds during the year. All year long, people walk their dogs on the grounds.”

The tour was developed by the Minnesota State Fair Foundation and the Minnesota Historical Society and touches on some of the fair’s most historically significant spots. 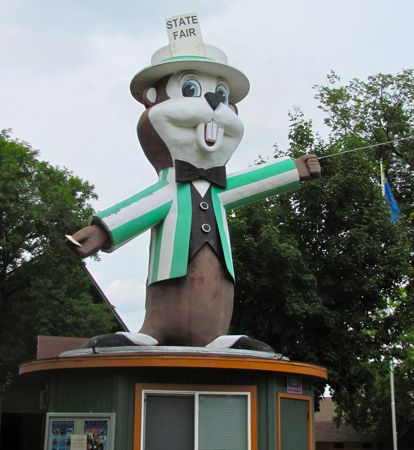 Prizes are offered to those who complete the tour and punch out the 12 stops on their brochure; prizes will be dispensed at the J.V. Bailey House and on the first floor of the Grandstand at the Minnesota Historical Society’s booth (#79) until 8 p.m. each day or while supplies last. Prizes include a memorial poster and a colorful button that proclaims “I’m a Winner!”

The tour brochures are available at information booths and at each of the tour stops. A map on the last page of the brochure helps you find your way.

“I had entered the Kransekake cake in the Foreign Cake competition for years and never won. One year I came into the Fair to see it on display and it had won a blue ribbon. It was also broken into a million pieces, but still had the blue ribbon on it. A sign attached to it said: ‘Damaged during judging.’ An elderly lady next to me poked me and said, ‘is that yours?’ I said yes and she laughed and said the only reason I got the blue ribbon was because the judges felt sorry for me. I’ll never forget that memory, how funny was that.”

Need to use the restroom, but fearful of the decades-old facilities around the fairgrounds? Panic no more. New this year is the recently constructed 5,500 square foot restroom. Constructed throughout the spring and summer, it is home to men’s and women’s facilities including a total of 75 shiny white toilets, 51 sinks, eight handy family restrooms and four drinking fountains. The facility is a little out of the way, but it’s appropriately placed: across from the Baldwin Park Family Fair on Randall Avenue between Underwood and Cooper streets.

The vendors setting up at the Fair are excited with the newly opened lavatory. “That is the most impressive new building on the fairground in decades,” said David Holm, staffer at the Creative Activities building.