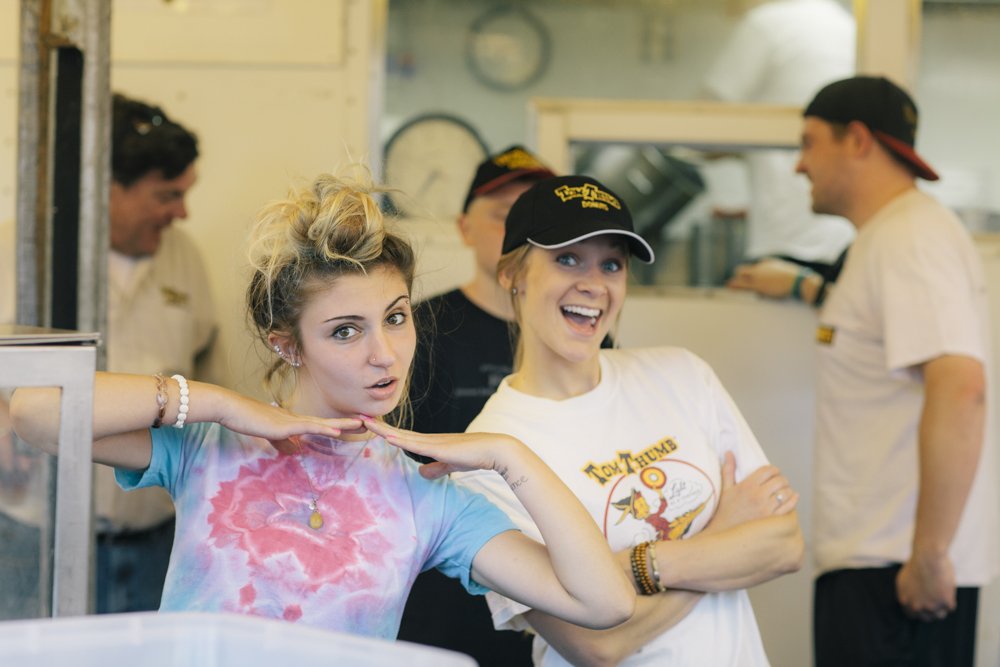 One of the best-kept secrets of the Minnesota State Fair takes place before the gates open.

“Did you have fun? Did you have a good time? Isn’t the State Fair the best thing Minnesota has going for it,” said Malcolm W. McDonald, Director Emeritus of the Foundation, at the event.

Indeed, it was not difficult to join McDonald’s enthusiasm. It was a perfect summer evening and the Taste of the Fair was held in the International Bazaar, around the corner from the Haunted House. The aroma of deep fried cheese curds and Sweet Martha’s Cookie Jar wafted in the air.

Part fundraiser, part pre-party, the Taste of the Fair offered 12 different State Fair concessionaires, including Fair staples and new foods, classic Mighty Midway games, a silent auction, raffle, and beer and wine pulls to support the various programs of the Foundation. The non-profit Foundation is a separate entity from the State Fair.

“This is an event we are proud of,” said Jesse Poppe, the Annual Giving Manager for the Foundation. “This is the 12th year of the Pre-Fair. It used to be a small pig roast. It’s a fun pre-party for people who love the State Fair and are involved in the Foundation.” 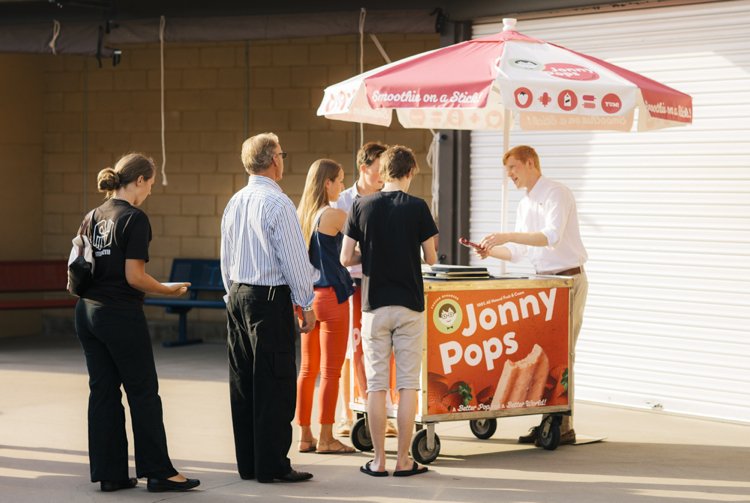 (Above) Taste of the Fair Pre-Party attendees sampling JonnyPops, a new Fair food item, given out by co-founder Jamie Marshall.

A silent auction and raffle had creative items. The VIP Parking, a reserved State Fair Administration Lot parking pass for all 12 days of the Fair, was popular with bidders. Some other items were Moo Doings, a private cow milking session in the Moo Booth and working in the All-You-Can-Drink milk booth, an autographed Adrian Peterson Football with tickets to a Vikings game, 300 scratch off lottery tickets, and State Fair favorites “Slice, Dice & Chop” gift pack, State Fair flower bulbs, State Fair artwork, jars of Home-Canned Goodness of 2014 State Fair entries and lunch with Fair Roadies.

A highlight of the Pre-Party was entertainment by local band G.B. Leighton on the International Bazaar stage. The band knocked out superb renditions of Jimi Hendrix, Prince and other classics. 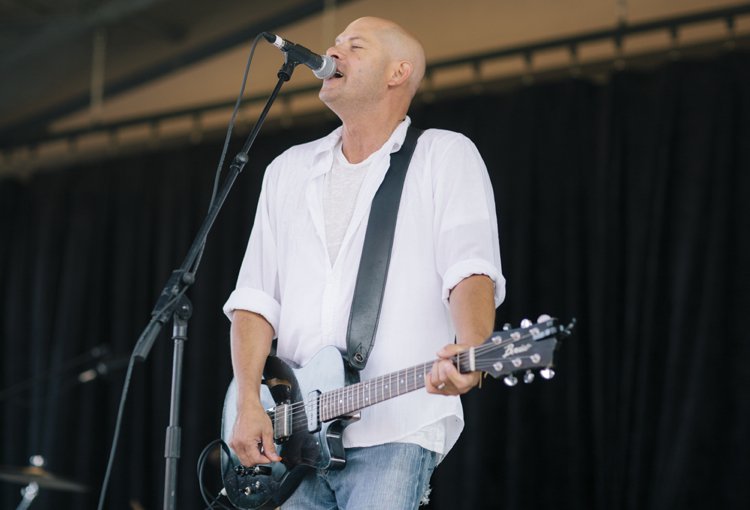 Three Daily Planet samplers attended the Pre-Party and here are some of the results: 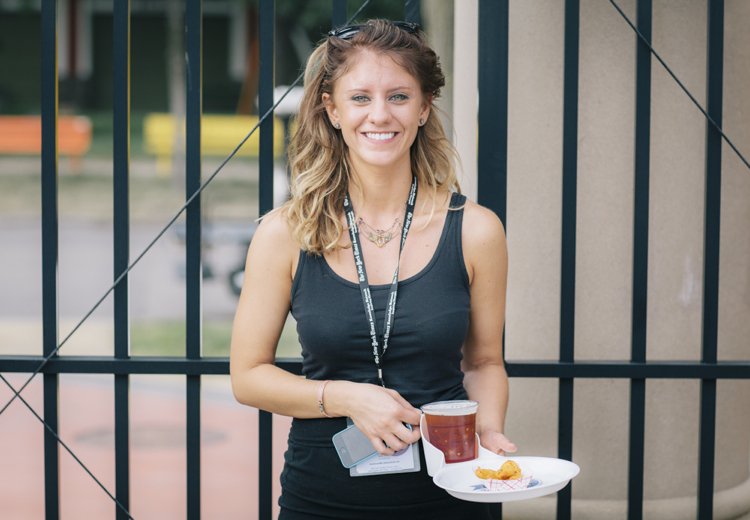 (Above) Pre-Partygoer and sampler Lindsay enjoying the event.

The Taste of the Fair Pre-Party

In addition to all the fun, attendees got a cool, only at the Pre-Party, combination of plate and cup holder. Poppe said they are only given away at the Taste of the Fair and aren’t sold at the general State Fair. Be sure to RSVP early for the 2015 Taste of the Fair. Contact the Foundation for details. 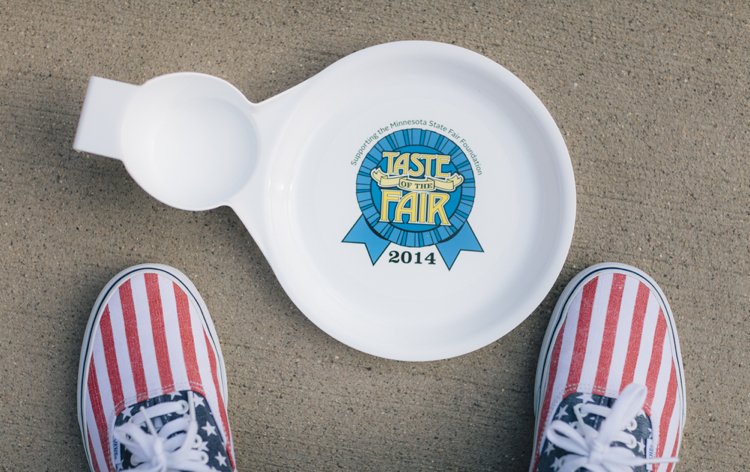 (Above) Exclusive at the Taste of the Fair Pre-Party: handy food and cup holders.

For a twenty-five dollar membership, you get the privilege of cooling off and free water in the J.V. Bailey House during the State Fair run and free 2015 calendar. There are different membership categories offering various perks. The bright yellow J.V. Bailey House is located near the Space Tower on Cosgrove St. and Judson Ave.

Two classic Midway games were on hand for Pre-Fair trials and errors: the Goblet Toss and Bottle-Up. Attendees were given tickets to try their luck. As at the general State Fair, winning those stuffed animals took stamina but numerous toys left with the partygoers. Bottle-Up game even has its own Facebook page.

Samples of JonnyPops were handed out at the Pre-Party and proved to be great-tasting, natural everything and a portion of sales goes to Hazelden Foundation.

Not heavy on the beer taste, but light and tasty this gelato was enjoyed by the samplers.

The Pre-Party offered trips to Sweet Martha’s without the long, long lines when the Fair opens. Gems of the State Fair, the cookies were warm, fresh and oh so wonderful.

Made fresh at the Pre-Party, Dino’s line went for miles but worth it.

The popular Minnesota band entertained the Pre-Party crowd, most notable were renditions of Jimi Hendrix and Prince’s Purple Rain. The band will be performing free, with gate admission, on Wednesday, Aug. 27 and Thursday, Aug. 28 at 7:30 and 8:45 p.m. on the Bazaar After Dark stage in the International Bazaar.

Greeting people as they arrived at the Pre-Party, the Duniya Drum & Dance created an enthusiastic start to the event. Duniya is also a 2014 Arts A’Fair participant that is supported by the Foundation. Arts A’Fair features performing artists from across Minnesota with live, pop-up performances during the Minnesota State Fair. 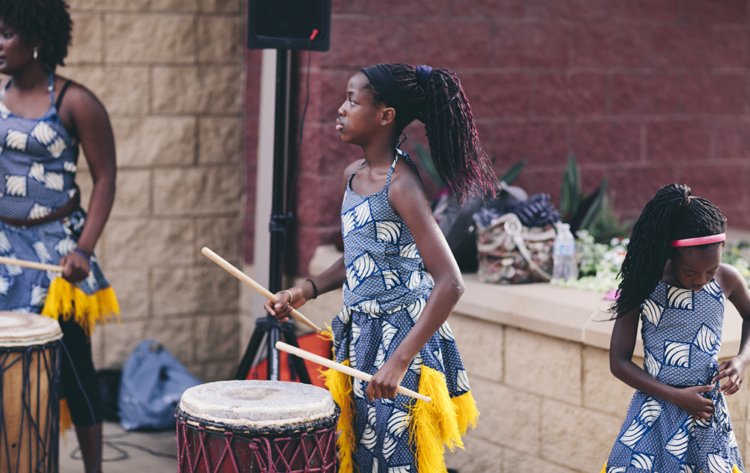 (Above) Duniya Drum & Dance, a State Fair 2014 Arts A’Fair participant, entertained at the Pre-Party entrance in the International Bazaar.

As a “Fair-well” a golf cart shuttled freshly-made Tom Thumb Mini-Donuts from their location on Carnes Ave. and Underwood St. to the partygoers. Trips on the SkyRide overlooking a brilliant sunset treated attendees to a glimpse of the fair-to-be. Both were met by enthusiastic thumbs up.

New at the Fair this year, the pizza rolls were given thumbs down by the group of three Pre-Party samplers. “It tastes like hash browns inside a bread stick,” said one sampler. The other sampler just shook her head and set it down. I agreed with both samplers.

Not the original on a stick, the Poncho Dog’s batter wasn’t quite done and a strange bright yellow-color, mushy when eaten and the hot dog luke-warm. All three samplers did not finish their dogs. Let’s hope things improve by the Fair’s opening as the people serving them sure were Minnesota-nice. 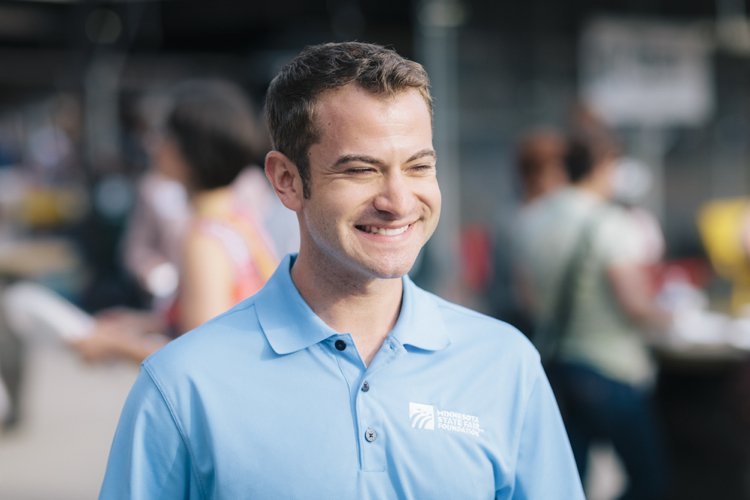 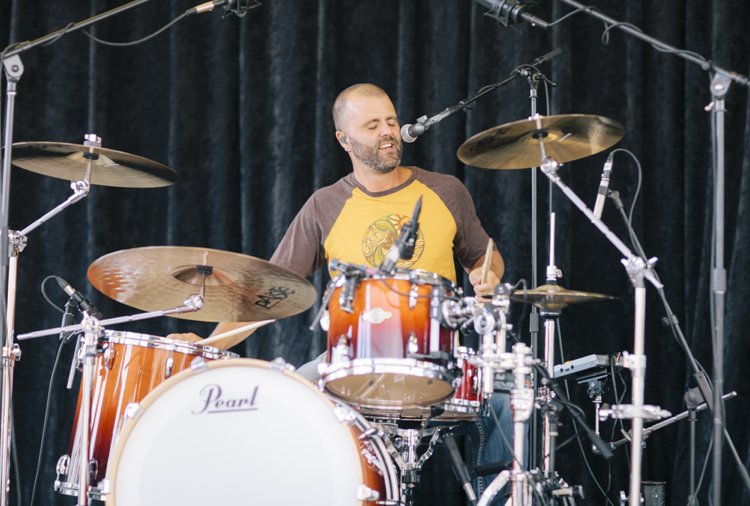 (Above and below) G.B. Leighton band entertained for the Pre-Party on the International Bazaar stage. The band will have four concerts during the State Fair. 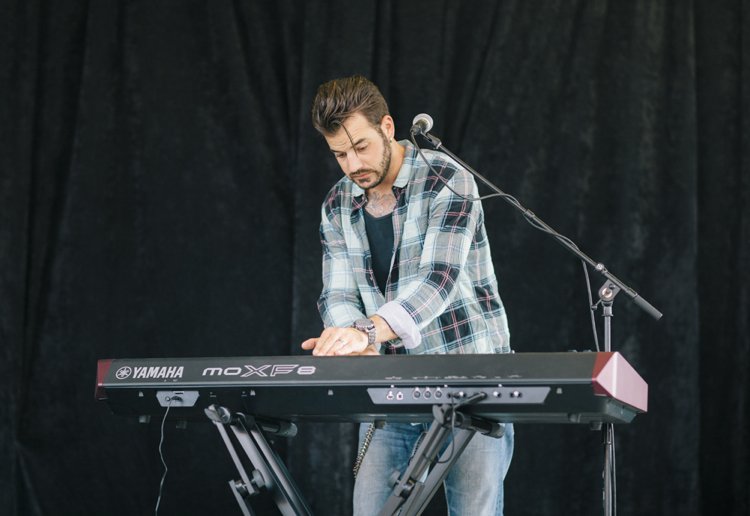 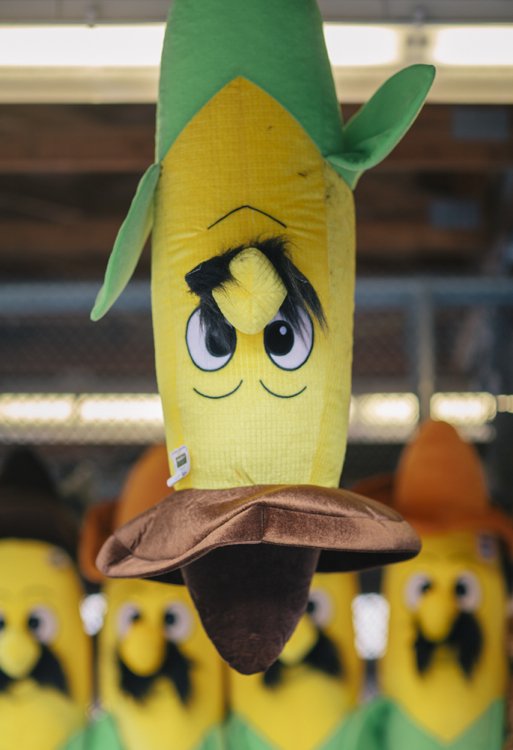 (Above and below) Classic Midway games Goblet Toss and Bottle-Up provided fun and stuffed toys for Pre-Fair partygoers. 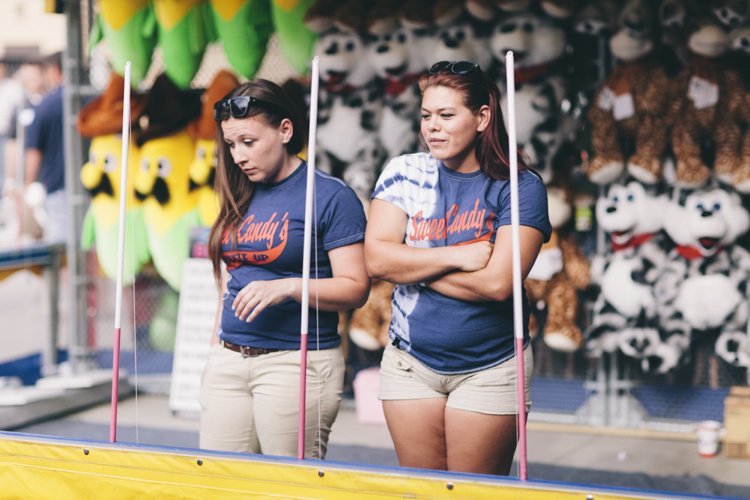 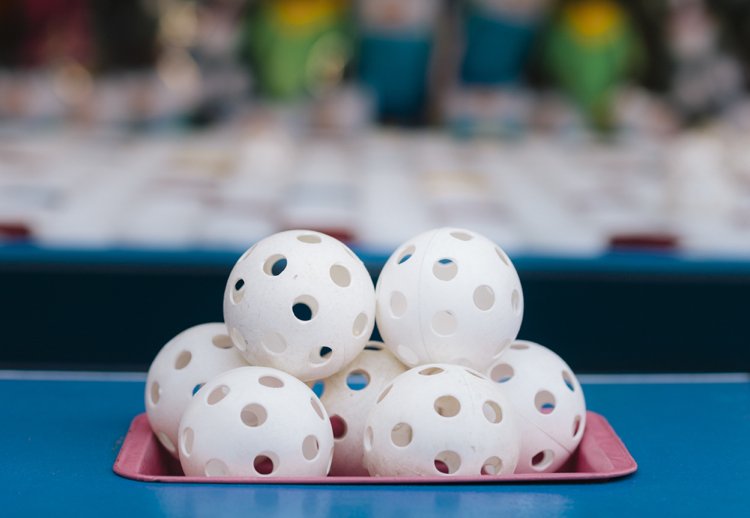 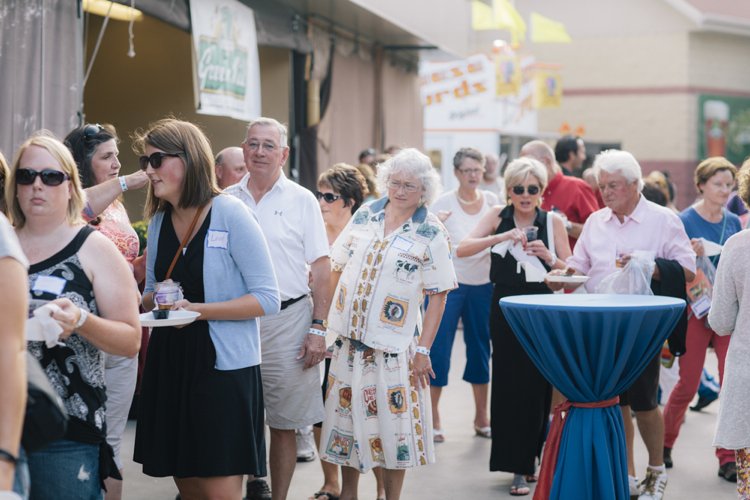 (Above) A thousand partygoers attended the Taste of the Fair Pre-Party. 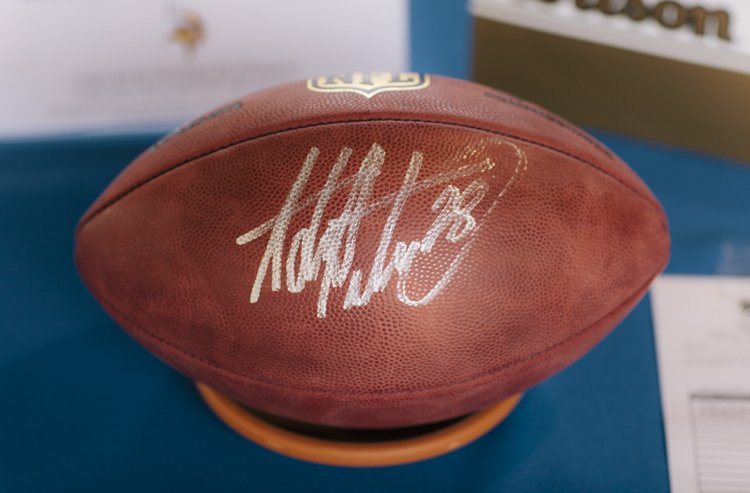 (Above) An autographed Adrian Peterson football was among the items at the event’s silent auction. 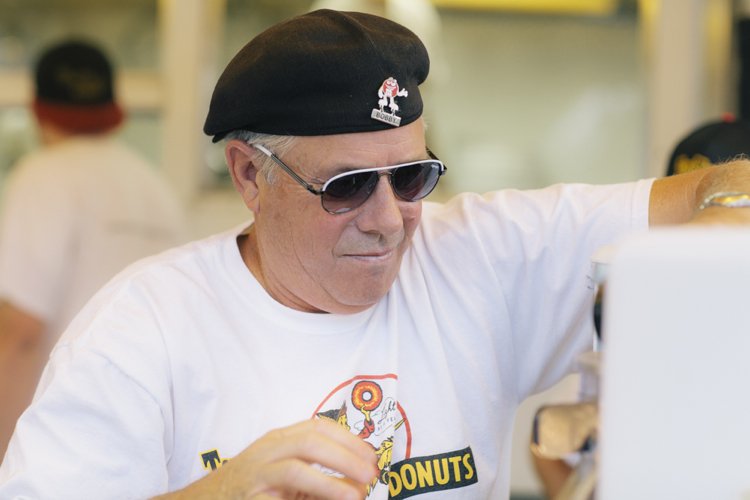 (Above) Bob Everett of Tom Thumb Mini-Donuts bakes a “Fair-well” batch of donuts for partygoers. “We’re the first mini-donuts on the planet,” he said. 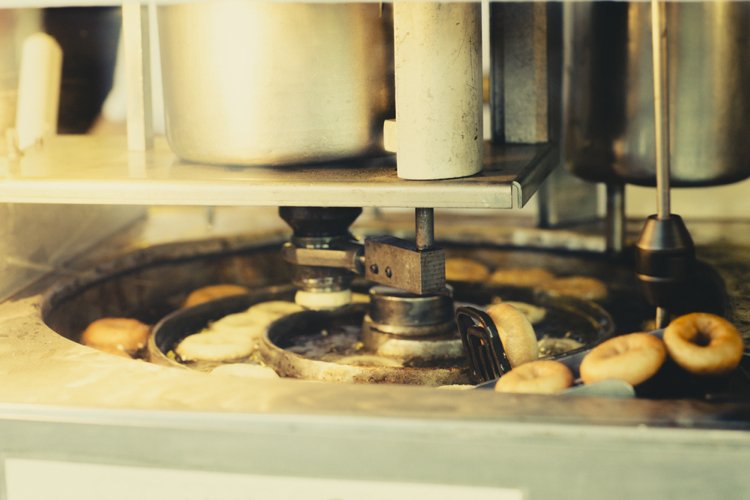 (Above) Minnesota State Fair Tom Thumb Mini-Donut machine. “We were born here in 1951,” said Everett. “We have changed very little. Our donut machine is the secret to success. No one else can dublicate us.” 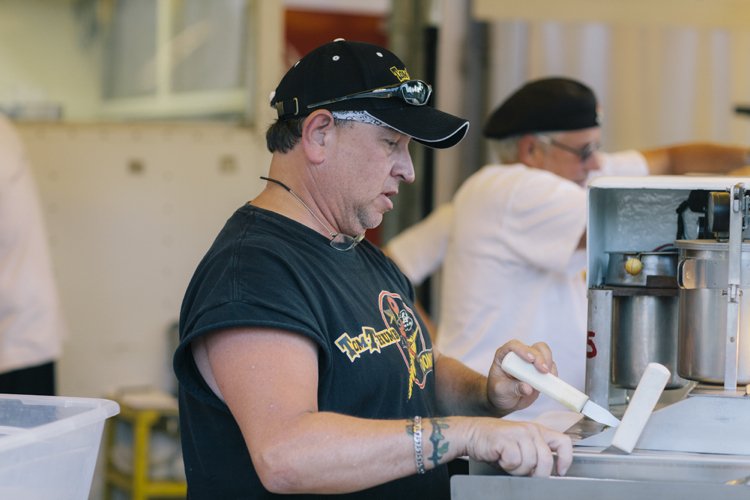 (Above) Tom Bettenburg of Tom Thumb Mini-Donuts. “My name is just a coincidence,” he said. 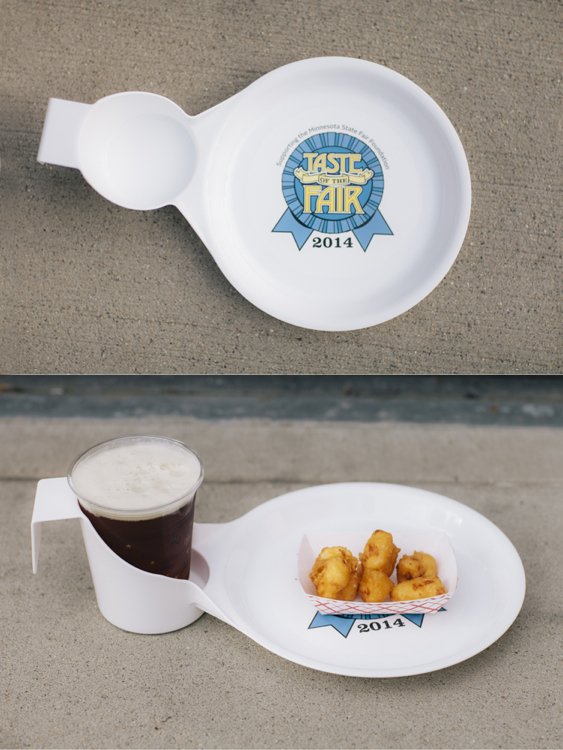 (Above) The handy food and beverage plate is exlusive to the Taste of the Fair Pre-Party, said Jesse Poppe. 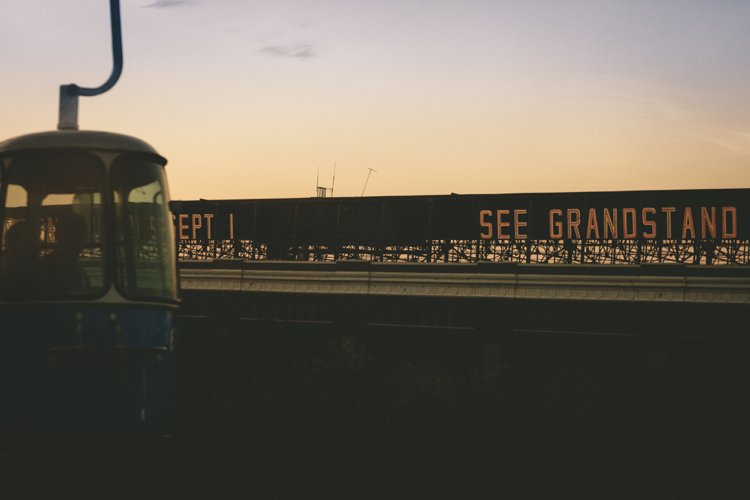 (Above) Taste of the Fair partygoers were treated to an evening Skyride.