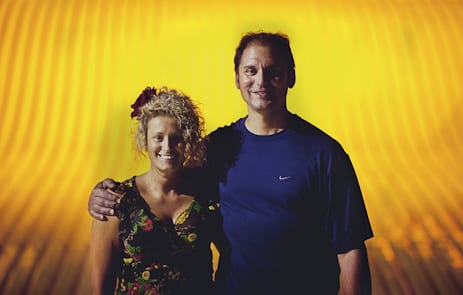 He worked at Mike’s Hamburger Stand. She worked at the Giant Slide. It was inevitable they would meet and fall in love.

“It was a State Fair romance story from the get-go,” said the girl, Stacey Barona. Celebrating their 15th wedding anniversary August 22, she and husband Robert stood at the fair’s iconic slide. “We went out to dinner—but not at the fair.”

Stacey and Robert sealed the deal by getting married on the fair’s opening day in 1996 on top of the 50-foot high Giant Slide. Ramsey County Judge Charles Flinn officiated. “We wanted a priest, but he wouldn’t marry us on a slide,” said Stacey.

Climbing 102 steps for the ceremony, the wedding party then went down the 175-foot long slide in their wedding finery. The reception was at the fair’s Pizza Palace between Carnes Ave. and Nelson St.

Stacey’s mother, Beverly Pittroff, had the original idea for the Giant Slide. When she passed away last year, on the last day of the fair, Stacey said a rainbow appeared over the Giant Slide after a downpour. “The rainbow stayed for an hour. People were standing around taking photos,” she said.

The State Fair community got together and raised funds for a memorial bench in honor of Beverly, located in front of the slide.

Stacey’s father Fred, who lives in California, built 46 slides in five years. Three slides are still open that the family owns and manages: the State Fair, a slide in Wisconsin, and the Sydney Royal Easter show in Australia. The family lives in Australia during the Royal Easter Show run. When not at fairs, they make their home in Roseville.

Stacey and Robert have two daughters, 13 and 11, who help their parents run the Giant Slide and their other concession stands nearby.

It seemed fitting that when TLC’s reality show, What Not To Wear, recently filmed an upcoming episode at the State Fair, they would end up at the Giant Slide. “[Hosts] Stacy [London] and Clinton [Kelly] went down the slide. Stacy had on huge heels with cameras mounted to the bottom of her feet. She had shoes on that you wouldn’t wear on a slide,” said Stacey.

(Above) The Giant Slide drops 175 feet. The microphone captures everyone’s screams as they slide down. Stacey and Robert Barona married 15 years ago on top of the slide. 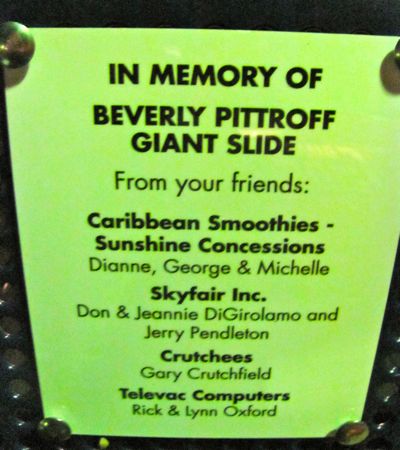 (Above) Giant Slide originator Beverly Pittroff died on the last day of the 2010 fair. The State Fair community raised funds to purchase a memorial bench and sign. (Photo: Barb Teed)