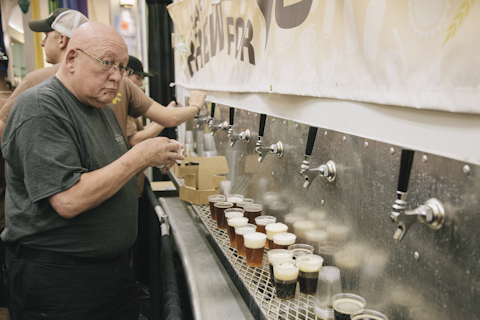 A server preparing a flight.

I expected a giant bar-like atmosphere at the Minnesota Craft Brewers Guild Exhibit, perfectly placed in the Agriculture Horticulture Building. After all, the flyer described it as the “Land of 10,000 beers” exhibit. I soon discovered a learning and museum environment: the exhibit detailed the brewing process all the way from the farm to the pint glass.

Being a novice in the home brewery industry, I was pleasantly surprised at the amount of information available at the State Fair exhibit to learn how this well-liked industry has grown and thrived all over Minnesota.

The Minnesota Craft Brewers Guild is a non-profit organization that represents 35 breweries and brew pubs and 16 trade affiliates (such as liquor stores, ingredient providers and ancillary suppliers working in the brewery business). This was the first time the Guild has had an exhibition at the State Fair. 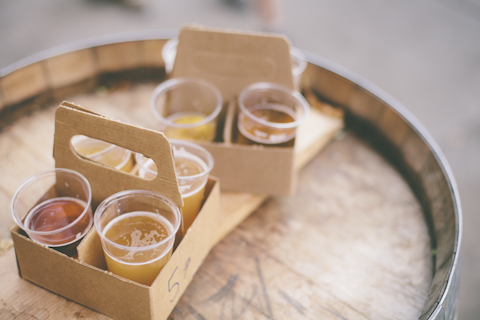 (Above) Samples of craft beer. (Photos by Jeff Rutherford)

Clint Roberts, president of One Simple Plan, the marketing firm handling the exhibit, said the popularity at the State Fair was better than expected. “This has been an absolute blast. We’ve introduced a lot of people to Minnesota craft beer,” he said. “People have a real appetite and thirst for craft beer right now. The industry is up 15 percent in the last year. The industry is on fire. It’s booming. More and more people are brewing craft beer. More breweries and brew pubs are opening. We have a lot of great craft beer [at the State Fair]. It was a prime time for a broader introduction to a bigger group of people and the State Fair is perfect for that because if you think about it 92 percent of people don’t drink craft beer regularly so there’s a big opportunity there and that’s where the State Fair comes in.”

Exhibit visitors paid a flat rate of eight dollars for a flight. A “flight,” explained Roberts, is a standard term, whether it is a wine flight or a beer flight, because it’s four, five-once pours. “It’s basically a five-once sampling of the beer,” he said.

There were 21 different breweries on tap and those rotated throughout the fair’s 12-day run. “The kegs are ever changing. Realistically you could come here three times a day for 12 days and have a completely different flight all the time,” said Roberts.

I learned the different styles of craft beer served at the exhibit: hoppy, darker, lighter, Belgium. The craft beer had splendid names like Mankato Stickum, Third Street Lost Trout, Lift Bridge, Lake Superior, Sweet Child of Vine and Steel Toe. I decided to be daring and tried a Summit Oatmeal Stout, a dark rich beer that was quite tasty

A section called “Days of Yesterbeer” contained mementos of the history of beer culture. Doug Hoverson, author of Land of Amber Waters: the History of Brewing in Minnesota, was curator of the history exhibit and provided beer memorabilia items along with the North Star chapter of beer collectors. 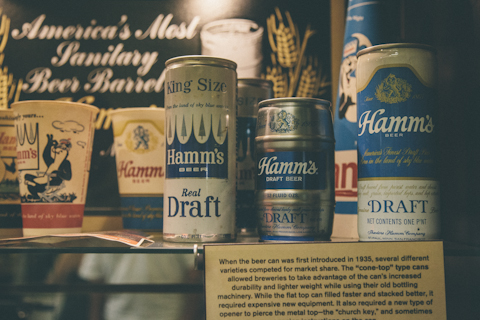 (Above) “Days of Yesterbeer” museum.

Roberts said the public is very inquisitive about the craft beer business. “Curiosity [about the industry] and I think people want to try something different and new. People shop local and understand the community aspect of Minnesota in general. If you think about it, people want to know where beer comes from. They want to know who makes the beer,” he said.

Local firm Minnefex, Inc. created clever and colorful exhibit banners and props that made it easy for novices like myself to read information on brewing beer. For example, the sign “Tasting Beer: Beer Color” helped visitors understand the various colors beer comes in, such as light and dark lagers, Oktoberfests, pilsners, “red” beers, brown ales and doppelbocks.

The exhibition included a corner devoted to kids with a coloring section and “dress like a brewer” clothes for photos. “If mom and dad want to come in and hang out in the museum-like environment, this is a broader exhibit for the family because it’s a ‘think while you drink’ place. This isn’t just a beer hall, this is a beer exhibit,” said Roberts.

There’s also a root beer section for kids, but forget the kids. It was the best root beer I ever drank, hands down. Roberts said the Craft root beer came from Town Hall, Fitgers and Vine Park breweries. The taste of the root beer was exquisitely creamy.

The exhibition had a ‘brew deck’ stage for daily speakers, and hands-on displays of hops and highlighted the concept of “brew-cation destination” visits. 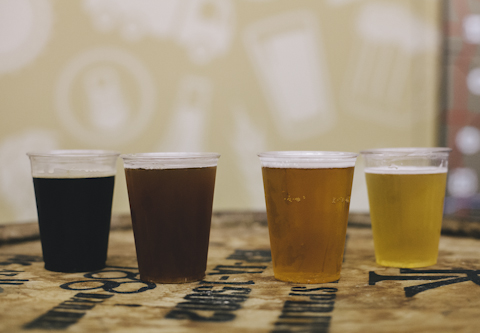 (Above) Visitors learned about the differing colors of craft beer. 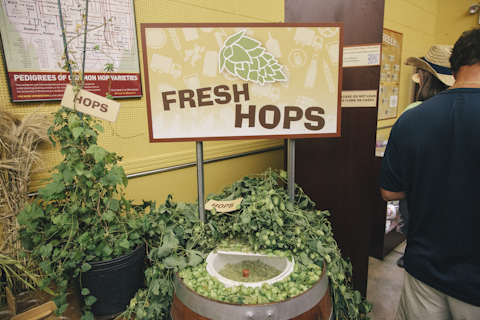 (Above) Visitors had a “hands-on” experience with beer ingredients. 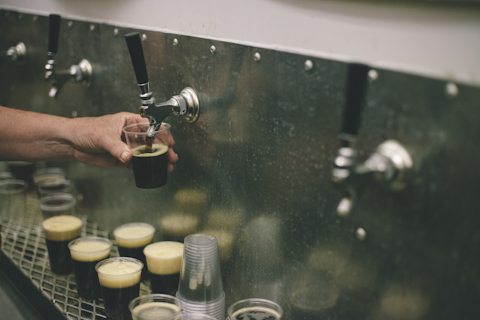 (Above) The darker brew sample. 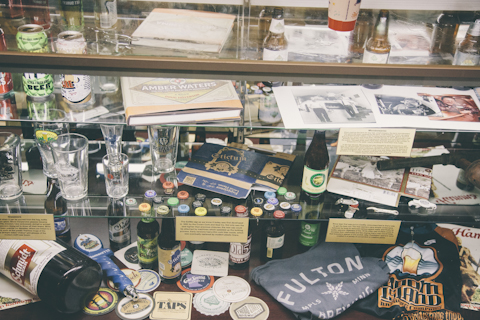