“Heaven Can Wait,” or Buster as he is affectionately called, was two weeks away from, well, meeting heaven. In a kill pen on the east coast in 2006, the American Saddlebred horse was scheduled for slaughter.

Kris Brutoco of Manahan Stables in St. Francis, Minnesota was looking for a lesson horse to train. She received an urgent call from Saddlebred Rescue: “Can you adopt him?”

Brutoco agreed to give a rescue horse a try. “I’m the biggest soft-heart in the world,” she said.

“His story is an example of how we throw things away in society and give up. Lucky for him Saddlebred Rescue saw him standing in a pen of horses headed to slaughter and they bid against the ‘kill’ buyer so that they could buy him and then adopt him out to a barn,” said Brutoco.  “He was adopted by Manahan Stables and his trip to Minnesota was paid for by the barn so that Buster could enjoy a forever home.”

Brutoco, 37, is passionate about rescue horses. “Horse auctions go on nonstop all over the country and it tends to be a lot of Saddlebred horses,” she said.

Brutoco offered to let me ride Buster at his State Fair stable area to demonstrate how gentle rescue horses are. “He loves people and has a very cheerful and loving disposition. And he loves his job,” she said. “He doesn’t carry a chip on his shoulder that he was once likely abused, under-fed and neglected.”

I decided to take-up Brutoco’s suggestion. Sally Snyder Tesch, president of the Minnesota Saddlebred Horse Association, helped outfit me in proper competition riding gear. I put my foot in the stirrup and climbed into Buster’s saddle. He proved to be mild and calm indeed. 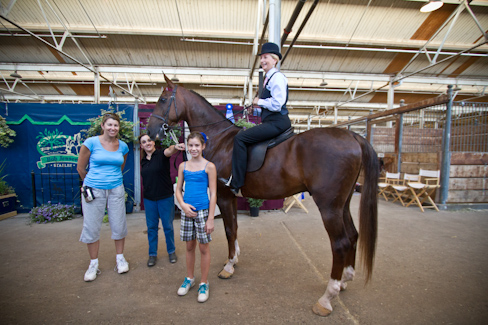 Buster was gentle to Daily Planet’s Barb Teed. Shown with Teed (on the horse) are trainer Kris Brutoco (holding the reins steady), and Jen and Marissa Leaser.

Buster, used for riding lessons at Manahan Stables, has taught more to his students than just how to ride, Brutoco said. “There is a special bond between a person and a horse they ride…unspoken love and that feeling stays with you all week. He’s brought out the camaraderie in our students. The ability to communicate with a horse often builds a person’s confidence.”

Buster has carried numerous riders ages six and up to Championship and Grand Champion status, according to Brutoco. She calls him her “trash to treasure” horse. 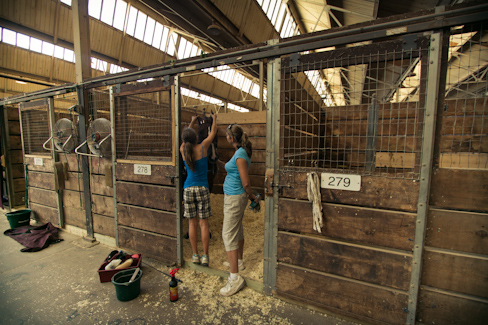 Jen and Marissa Leaser, who take riding lessons with Buster, get him ready for competition at the Minnesota State Fair. Buster went on to win two blue championship ribbons and a third place show. 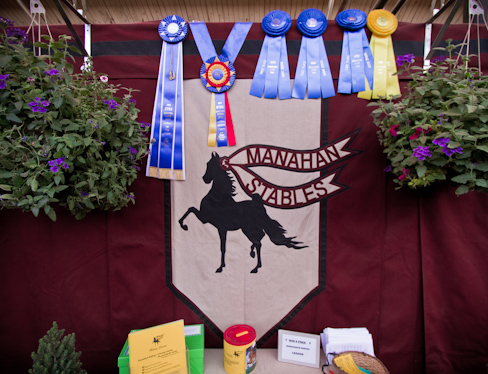 Some of the ribbons won by Manahan Stable’s rescue horses.