Terry McDaniel didn’t know what to do with her dying autumn garden. What she decided earned her a placement in the 2010 Minnesota State Fair Fine Arts Show.

“I freeze my fall garden flowers in ice luminaries and photograph them in my horse trailer,” she said at the Art Show’s preview night.

The result was a stunning digital print of scabiosa seeds frozen in ice. McDaniel said she hot-glued the petals and filled an illuminator with water which froze in the winter. Using a macro lens, she snapped a detailed photo through the ice.

McDaniel, 51, of Inver Grove Heights,  photographed a series of her efforts, sometimes using sunlight, sometimes just the background light. Once she used a moving flashlight among the encased-in-ice plants. She produced a video of her floral work, called Frozen Foot in the Door (above), with iMovie and original music created on her computer.

McDaniel made her unique luminaries for years at her Christmas Eve parties. “A friend said I should take pictures of them,” she said.

She calls herself a “photo stylist” and is also a bee keeper. McDaniel has entered the State Fair’s art competition five times but this is the first time she’s been admitted, she said.

Indeed, the competition for placement in the Fine Arts Show is intense, with 2,013 entries and 413 accepted which results in a success rate of 21%. Now in its 99th year, the show requires that artists have a Minnesota address. It is a juried competition and only the works accepted by the jurors are on display at the Fine Arts Center during the fair. 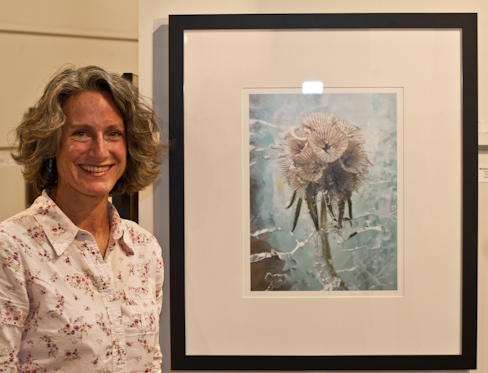 Another five-time entrant and first-time exhibitor is Jeffery Gauss. He put 200 hours into his winning pen and ink, phosphorescent acrylic-paint drawing called MicroDoodle Topiary. As the title implies, Gauss created a design of a tree all done in micro doodling with a rapidograph technical pen.

His sketch is a crowd-pleaser, with a constant swarm of people crammed around it. To get a better look at the miniature doodles, Gauss hung a magnifying glass next to it.

“When I was a kid, I would always write small on class tests. My teachers would say ‘I can’t read that’ and I would say ‘oh yes you can, you must need glasses.’ I would kid around with them,” he said.

Viewers need to look close at the minuscule sayings and phrases he has incorporated into the tree. “A lot of the little things deal with the State [of Minnesota]. I draw from a stream of consciousness,” he said. One teeny sentence,  “March 4, 2010,” is when the process began. He finished in August. In honor of turning 50 this year, Gauss placed 50 tiny rhinestones within the work.

Gauss won two awards for MicroDoodle Topiary: A yellow ribbon for third place in his art category of mixed media and a purple ribbon for “First Glance,” a new vote category this year.

The First Glance Award was selected by participants attending the”pre-preview” fundraiser, a catered thirty-dollar a head affair where attendees were given ballots and voted on what they liked best in the show. “They voted for mine as their favorite and it’s quite an honor,” said Gauss.

Gauss’ technique of drawing in phosphorescent acrylic paint makes the middle glow green when it’s dark. He also designs and creates magnets. “Get small and doodle the day away,” says his website, which includes a look at his State Fair entry. 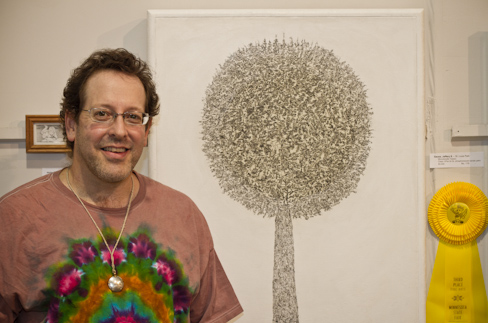 This year’s show features a exhibition showcase by Minnesota art doll artists. These art dolls are not toys, are one-of-a-kind, and are a work of art. The dolls can be made of any medium or mixed media. Their display was brightly lit and colorful. It proved to be a popular stopping point as people were leaving the building. Also new this year in juried competition is the jewelry category.

Visitors are invited to vote for their favorite artwork in the show, called “The People’s Choice Award.” Ballots for both adults and kids are available at the front desk in the Fine Arts Center building. The winner will be announced on the Fair website on Labor Day.

The State Fair Art Show is located at the Fine Arts Center on Cosgrove Street, near the Eco Building, is free with fair admission, and is open state fair hours. 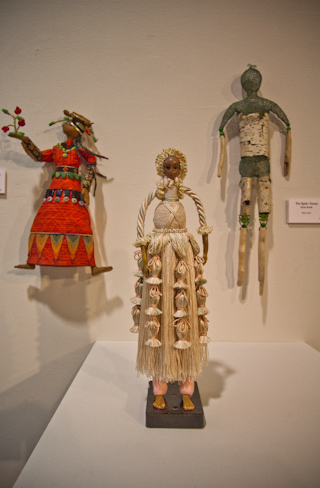 (Above) Some of the unique “dolls as art” at the Minnesota State Fair Fine Arts building. The dolls are not juried but are shown by invited exhibitors. 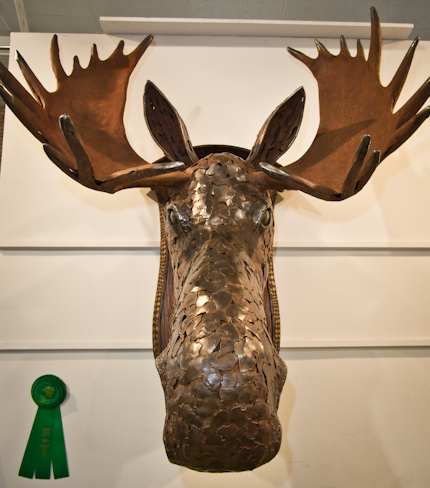 (Above) This moose sculpture is by Paul Tierney of Bloomington and won a Merit award.