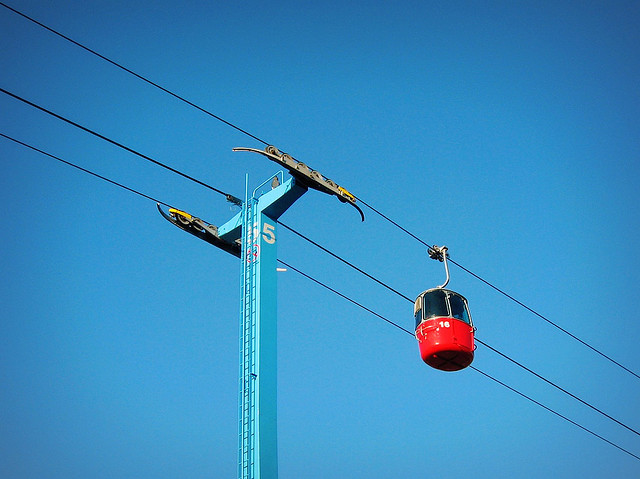 25 years ago I was 12 years old, standing on the Minnesota State Fairgrounds between the haunted house and KDWB’s giant booth, listening to the competing sounds of Michael Jackson’s “Thriller” and Swing Out Sister’s “Breakout.”

My family had just moved from Duluth to St. Paul, where we’d taken residence in the Merriam Park house that was my father’s childhood home. That spring my grandfather agreed to sell the house to my parents, and moved to an apartment nearby on Marshall Avenue. While the house was being renovated, Grandpa was diagnosed with advanced cancer. Wanting to spare his family the long suffering they’d gone through during my grandmother’s protracted—and ultimately fatal—battle with cancer, he pulled his car into the garage of the house he’d just sold to us, closed the door, and left the car running.

We came down from Duluth to attend the funeral, and walked through the house, which still smelled of wet paint and fresh wallpaper. My father and I visited Grandpa’s apartment, with the mail still piling up and the fish still needing to be fed. At the wake, for the first time in my life I saw my father cry. It was an open-casket funeral, and my three-year-old brother reached out to touch the mole on Grandpa’s face. I met Senator Eugene McCarthy, who told me that my grandfather had been a great man. After the funeral, our family friends Ed and Norma took my siblings and me up to Post Road to watch airplanes take off in the sultry late-afternoon heat.

I didn’t have many St. Paul friends yet. My sisters and I were about to matriculate at St. Mark’s School, where my father and all his siblings had gone. Dad said that Pat O’Hara, a boy who was in my grade and who was the son of one of Dad’s own St. Mark’s classmates, would walk me to school on the first day.

Our next door neighbor, Jerry McElroy, had also gone to St. Mark’s with my dad. Jerry fought in Vietnam, where he met his wife Tippy. Their oldest son, Pat, had been a classmate of mine in kindergarten and first grade at Nativity—a Catholic school in Highland Park, which my dad referred to as the “sirloin section” in contrast to St. Mark’s “hamburger section” of St. Paul—before we’d moved to Duluth. Soon after we took residence at the Merriam Park house, I was re-introduced to Pat. The two of us stood there awkwardly on the sidewalk: Pat in his jeans and flannel shirt, me in my short shorts and one of the hugely oversized polo shirts I’d inherited from my dad. Each of us tried unsuccessfully to remember a single thing about the other.

I wasn’t happy. I hadn’t wanted to move. I liked Duluth. I liked my friends and the lake and our huge house next to a wide field where we could play ball, just up the street from a creek where my friends and I spent over half the duration of the Reagan Administration trying to build a dam. The move had been stressful for all of us—including my parents, who’d spent several months trying to sell our Duluth house while my dad commuted to his new job in the Twin Cities, spending only weekends in Duluth. Ultimately they released the house back to its previous owner, at a loss. That summer we ate so much fast food that, to my utter amazement, I actually got sick of chicken nuggets.

Still, there was a certain air of excitement about moving to the big city—a metro area with no fewer than ten Target stores (my mom estimated) in comparison to Duluth’s one. I also knew that I was on the brink of my teenage years, years that I hoped would mean dances and dates and independence. I liked my new room, which had a stained-glass window and a new carpet in the bright green color I’d requested. I liked living near family members like Aunt Betsy, who’d take me to movies at the Uptown Theatre and shopping at Let It Be Records and had opinions about things like Craig Claiborne’s best recipes and the dos and don’ts of dinner parties.

What would I have been thinking, standing there at the State Fair in 1987? I would have been in mortal fear of the haunted house, where I heard the ghouls would grab you. I would have been in awe of the KDWB DJs and the cool kids who knew how to dress and how to act and whose musical tastes weren’t purely dictated—as mine were—by which performers had songs in recent sci-fi movies and which records their dads thought were good enough to buy on CD. I might have been thinking about my lingering crushes on Duluth girls. I was probably imagining Transformers adventures in my head.

Yesterday I was listening to KDWB, and the DJ said that this year they’ve moved from their longtime outpost across from the haunted house to a spot near the Grandstand. They’re still at the Fair, though, playing the hits and chatting about corn dogs like they’ve been doing since my parents were kids. The haunted house is still there too, though apparently it’s a milder experience than it used to be; I have to rely on the word of others, since to this day I’ve still never crossed that cursed threshold.

St. Mark’s didn’t work out; I lasted about two months there before the bullies drove me out and I went back to Nativity. Pat O’Hara was always nice to me, though. He died several years ago, with tragic suddenness and prematurity, of a longstanding health condition.

Pat McElroy is now divorced, with kids. As of this spring, my parents are divorced too.

There are 42 Target stores in the Twin Cities metro area, but still only one in Duluth.

Let It Be is gone, but the Uptown Theatre’s still there, and when it reopens after its current renovations, I’ll ask Aunt Betsy if she wants to go check it out. But never mind movies for now: there are more important things to do. It’s State Fair time.

Update, August 2013: Last year I went through the haunted house for the first time. I survived. I’ve also recently written more about that summer and my grandfather’s death.