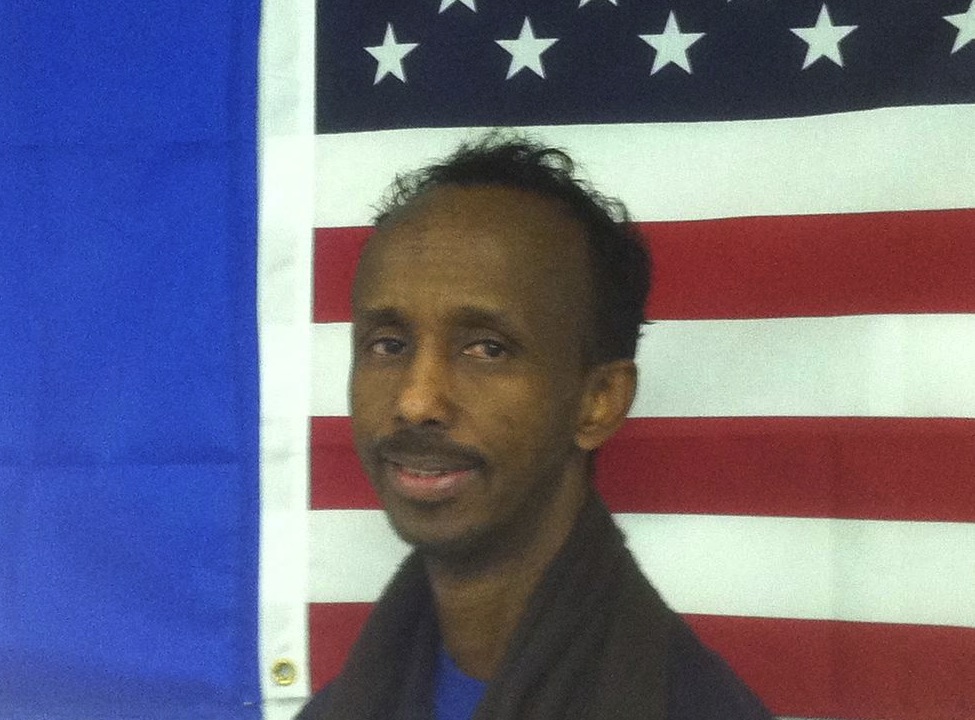 “There is no wire connecting my mind to yours,” Abdikadir Adan Xiito informs me crisply. He’s explaining his philosophy for teaching math to children, in between sessions correcting the workbooks of two dozen young students in an afternoon homework class at the tutoring school here that bears his name, the Xiito Academy.

The young Somali boys and girls bend over their desks solving sets of addition, multiplication and fraction problems. One might expect high-energy hubbub and hijinks in a late afternoon class for kids, after they’ve spent a full day in school. But no, the room is quiet, energized but serene.

The swish of turning notebook pages is the loudest sound in the room.

Every few minutes, a child completes a set of problems, jumps up and plops down in a chair next to Teacher Xiito (pronounced HEE-toe, the word is a nickname meaning “skinny” in Somali), nervously handing over a notebook for his corrections.

Elegant and slim, decked out in a woolen scarf, Xiito exudes an air of focused intensity. In the classroom, his focus is somehow placed equally on every child in the room. He speeds through each finished problem set that is brought to him with a ballpoint pen, drawing a quick slash through the correct answers, engaging the students to correct the flubs.

“Very good,” he finally pronounces before writing down a fresh set of addition problems for a seven-year-old boy, the set customized to slightly expand the child’s skill level. Looking happy, as if he’s just been hugged, the boy grabs his corrected dog-eared workbook and darts back to his seat where he immediately regroups, refocuses, and keeps working.

“To teach them you need to directly connect to their minds,” Xiito says, completing his thought to me. “I say to them sit, first. Listen, second. Watch me, third. And then ask questions. That’s the wire that I use to connect to the kids’ minds: sit, listen, watch me and ask questions. It works.”

It has worked an astonishing Minnesota miracle of sorts for Teacher Xiito, who opened his tutoring academy, the Somali Education Center, in 2001 to help keep Somali children in the state from falling behind in school.

Since then he and a team of volunteer teachers have taught math, English, biology, environmental science and U.S. citizenship skills to more than 2,000 Somali boys and girls in the state.

Hundreds of Xiito’s young charges have gone on to finish high school and attend vocational schools and college. His school’s two branches, in Minneapolis and Burnsville, also run special education events such as a Girl’s Math Contest held last summer.

Such successes, and Xiito’s charismatic teaching style, have frequently been featured on Somali TV and other media, and YouTube is replete with video homages to Xiito offered by grateful students and parents.

“He’s indispensable to the Somali community in Minnesota,” said Abdi Aynte, a reporter for the Al Jazeera broadcasting company, who was tutored by Xiito in college for a time. “For many students, it would be impossible to make it through high school and college without him.”

What makes Xiito stand out, Aynte said, is the depth of his sincerity and integrity.

“He wants to help the Somali community’s most vulnerable group, the young, who are at risk for both gangs and extremists,” Aynte said. “He’s a towering moral authority in our community.”

Minnesota’s Somali community numbers in the tens of thousands and is the world’s largest diaspora community of Somalis. The stream of refugees to the state began in 1991, at the beginning of a civil war which continues to this day, has killed a half million people, and has forced more than two million to live as refugees inside and outside the country.

Xiito’s road to Minnesota was typical of many Somali refugees who now live in the state. When the civil war started in 1991, he was a recent graduate of Lafoole University near Mogadishu, just starting as a high school math teacher. He fled to the Otango refugee camp in neighboring Kenya, where he lived for six years before arriving in Minnesota in 1996.

He arrived in this state without a penny, knowing only scraps of English. He worked for a year as a janitor in the 2550 Court International Administration Building in St. Paul, before taking a double-shift job at the Minneapolis airport, checking in-flight catered meals. “I didn’t see the sun for two years,” he remembers. By 2000 he’d saved enough money to enroll at the Metropolitan Technical and Community College in Minneapolis.

But his savings ran out. He had to leave after only a semester, and it triggered a personal crisis for Xiito.

“I had three dreams for my life in the U.S.,” he says. “The first was to make a living. The second was to go to university. My third dream was to help people on this earth. I knew I had missed my chance at university. But we should extend ourselves and lend a hand to other human beings. I realized I could still achieve my third dream, and that’s why I started the school.”

One of his first volunteer teachers was Suleiman Amin Egeh, a Somali immigrant himself who signed on after marveling at Xiito’s generosity.

“He’s not only a teacher, he’s a creator and a developer,” Suleiman said. “I was amazed by the man. He started from zero. He saw the need and he began with his own time and money, with small donations from parents. I had never seen anything like it, and I decided to volunteer.”

By 2008, Xiito and his volunteers were tutoring more than 200 students a year, and Xiito was famous for his math teaching in particular.

Fadumo Husein, who began sending her fourth grade son to see Xiito in December for math tutoring, says these dramatic videos are no marketing concoction, but rather reflect a common transformation among Xiito’s kids.

“My son couldn’t add two and seven before,” she says. “I was worried about him. Now, within three months, he’s good at math. He was scared at public school but now he has confidence, he believes in himself.”

“He teaches how to focus and get serious,” said Farhio Kalif, a Somali TV show host, whose son is tutored at the Xiito Academy. “Those are important skills. When I took my son in, I was amazed to see that within minutes he wasn’t looking at me, he was just looking in his workbook.”

“It’s also good to have someplace to take the kids for two or three hours, where you know they are safe and learning useful things,” Kalif adds. “Xiito is good for the health of the parents, as well as their children.”

To keep the school going has required resilience at every step.

Along with many other Minnesota non-profits, the school lost much of its funding in 2009, a huge blow.

Some classes were dropped. But with added support from volunteer staffing and parent donations, the school, rechristened the Xiito Academy, has kept running seven days a week.

“We lost our funding, but I didn’t want to lose my dream,” Xiito said.

“I have only one passion and it’s education,” he says. “It’s a way of life. It’s the future of both the individual and the state. So the question to always ask is, ‘How can we keep improving education for our kids?’”