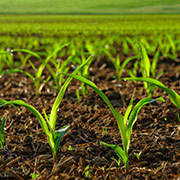 We can put the threat of drought to bed for the start of the 2013 growing season, an enormous turnaround since the beginning of April.

Field surveyors for USDA’s National Agricultural Statistics Service said on Tuesday that only 3 percent of Minnesota subsoil moisture remains listed as very short, and only 16 percent is categorized as short of moisture to sustain plant growth going forward. And in a state blanketed by drought conditions two weeks ago, 72 percent of Minnesota land is now described as having adequate subsoil moisture, and 9 percent is now said to have surplus moisture.

Topsoil conditions, giving seeds their start, are also improved from early April when drought threatened this year’s crops and the Minnesota economy. The Minnesota office of NASS said only 4 percent of land is now listed as short of moisture, 70 percent is listed as adequate, and 26 percent is now listed as having surplus topsoil moisture. No land was listed in the very short category.

Planting remains behind schedule at Minnesota farms this year, NASS said. Whether that proves a problem for farmers will depend on how long the current wet weather persists, and what temperatures and heat calories will come during the summer. This much is certain: the biggest immediate threat to this year’s crops has passed.

For a good, updated look at how soil conditions have changed with precipitation, look at the middle map from the Climatology Working Group.