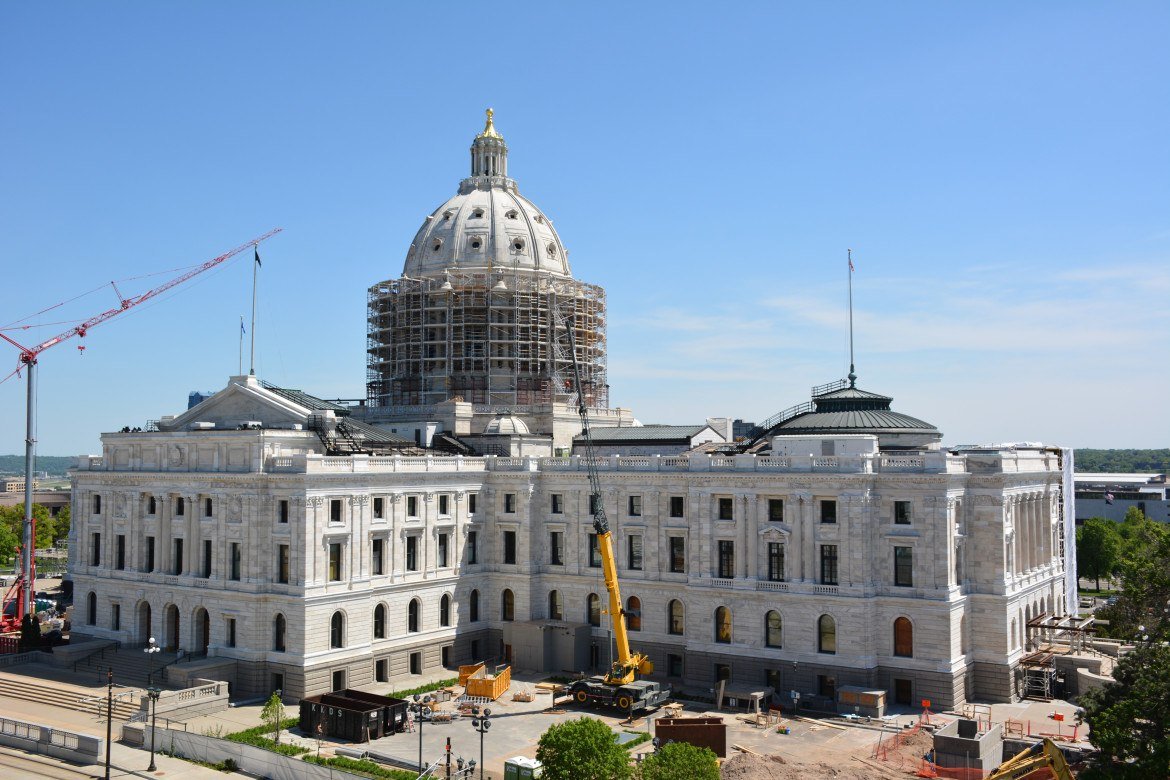 View of the Minnesota State Capitol from the roof of the new Minnesota Senate Building. Photo by Bill Huntzicker

The Minnesota Senate Building, nearly half completed and almost closed in, should be open by the end of the year, according to the Senate’s project manager, Vic Thorstenson, on an exclusive tour that included the Daily Planet on Friday, May 22.

“The Republicans got a lot of mileage – and maybe picked up a few seats – by attacking  this project,” Thorstenson said, “but they’re happy to be moving into updated offices.”

Thorstenson and Greg Huber, project manager for Mortenson Construction, led about a dozen Senate staffers and Sen. Sandy Pappas, DFL-St. Paul, on the tour of the controversial building site.

Standing in a future hall in front of soon-to-be locker rooms, Thorstenson said, the locker rooms are for people who run, walk or bicycle to work or want to change for other reasons. “We have no work-out rooms or reflecting pools,” he said in response to charges from critics about the building’s original design and price tag.

The building will move all the 67 state senators into the same building. Currently, they are in several buildings, including the Capitol and the State Office Building, which houses state representatives.

Senate offices will encircle the second and third floors of the new four-story building, allowing each senator a window. Interior spaces will be occupied by staff and hearing rooms. The similarity of the offices and the number of offices will put members of both parties in proximity with each other and reduce the amount of shuffling that will take place when the majority and leadership change.

Two hearing rooms are large enough to house the chambers of the Senate and the House. The Senate will meet in one of these room for the 2016 legislative session, but the House has said they will meet in their Capitol chambers, even though the decision may require temporary restoration of the chamber for the session.

This transition is required because the Minnesota State Capitol is undergoing extensive $272.7 million historical restoration at the same time, forcing the governor and lawmakers to scramble for temporary space. They began moving out of the Capitol at the end of the legislative session in late May.

The Minnesota Senate Building – using the acronym MSB instead of SOB already pinned on the State Office Building – has also been designed to encourage communication among staff members of both parties, Thorstenson said.

Key cards will allow staff members to enter the rear of hearing rooms and a back stairs will allow them to move among the two levels of offices, further encouraging communication among partisans, who will see one another regularly in the halls. The two office levels will be connected by a window-lined stairway.

“Ninety-four percent of the project is being fabricated and built by Minnesota companies,” Huber said in a handout from Mortenson Construction. “Where the building’s façade faces the Capitol, natural stone quarried near Mankato and Cold Spring will be used. The efficient insulated glass is being made in Owatonna, and the low energy fan wall air handling units have been fabricated in Faribault.”

He showed a block of Kasota stone like the surface that will cover the south wall facing the Capitol across University Avenue. The other three exterior walls will be a brushed surface designed to match the Capitol campus in color, if not surface.The entire building was designed for “complete accessibility,” Thorstenson said, with an extensive underground garage with free parking for handicapped access with a tunnel under University Avenue to the Capitol, thus increasing accessibility of the Capitol as well.

Thorstenson said the rest of $13.6 million parking garage will be financed entirely by subscription of users, reducing the need for surface parking around the Capitol.

The building will also provide accessible hearing rooms, underground parking and material handling for the Capitol and other state buildings.

Huber said the design and construction team is composed of Mortenson, BWBR, Horwitz and Gephart. “The project is currently exceeding its workforce utilization goals of 32 percent minority and 6 percent female.”