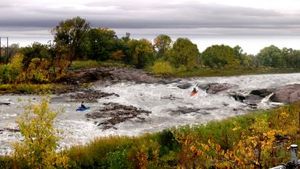 Bluestem is an unabashed Minnesota River Valley partisan. We were born at the confluence of the Blue Earth and Minnesota Rivers, the bluffs above St. Peter were our playground, and since returning to the state, getting lost on township roads and granite outcrops.

Fortunately, we’re not alone in that fondness. There’s no one voice for the River, but an alliance of citizen groups who’ve worked to recover the meandering prairie river that nestles in the mighty valley carved out by an ancient glacial river.

One project underway near Granite Falls will help the river herself recover rapids that no one’s seen since Teddy Roosevelt was President.  Tom Cherveny at the West Central Tribune reports in Gateway to what many expect to be a regional gem for paddling, fishing is about one month from opening:

Workers are only about one month away from opening what some expect will become western Minnesota’s top destination for paddle sports, and a popular fishing spot as well.

Rachel Construction of St. Michael is on track to have the Minnesota Falls dam on the Minnesota River removed by mid-February. . . .

Once the dam is removed, the river will find her rapids, to the delight of fish and human paddlers alike:

With its removal, a three-mile stretch of fast water with rapids will return to the river between this site and the dam in Granite Falls. Six different areas of rapids are expected to re-emerge upstream when the project is completed.

“The most unique habitat in the entire Minnesota River is right here and it is going to be exposed,” said Chris Domeier, Minnesota Department of Natural Resources assistant fisheries supervisor in the Ortonville office. Domeier said the dam’s removal will provide “tremendous angling” opportunities that will extend well beyond the site itself. The spawning habitat that will be restored will benefit a wide variety of game fish, including walleye and sauger, and attract fish such as lake sturgeon and paddle fish from as far as the Mississippi River.

There is already a great deal of interest in the paddling opportunities to be opened up, according to Nicole Zempel, director of the Granite Falls Area Chamber of Commerce. The chamber offers kayak and canoe rentals at its downtown Granite Falls building, and has seen ever growing demand for it, she said. The Chamber is looking to promote the new fishing and paddling recreational opportunities that will now be available, she said.

Dam owner Excel Energy, no longer needed the structure, which had needed expensive repairs. While people had to remove the faulty  structure, the Minnesota River will take care of the rest:

. . .the natural channel will re-assert itself. Domeier said the process will occur relatively quickly, although it will probably take some time for the natural sand and gravel bottom to fully re-establish itself in the area.

Domeier said little needs to be done to restore the aquatic habitat once the dam is removed. “Mother nature in the end is going to do what she is going to do. She knows,” said Domeier.

Read the entire article at the Tribune. Here’s a short slideshow of photos of the removal from Clean Up the River Environment (CURE):

Up and down the river–in town like Henderson, New Ulm, Granite Falls, and Montevideo, the value of the river itself is being rediscovered by alliances of local citizens. The Upper Valler corridor is in the process of being designated as a National Blueway

A draft of the preliminary nomination of the Minnesota River as a National Blueway is being developed and will be available for public review next Tuesday, Jan. 15 at the Meeting of the Minnesota River Watershed Alliance from 6 to 9 p.m. at Ridgewater College in Hutchinson. This Blueway Designation has the potential to align our work to clean up the Minnesota River on a whole new scale of cooperation between the grassroots, the state and Federal agencies.

To get an idea of what that grassroots work has produced, check out this video of Scott Kudelka talking about work up and down the river. It’s a short excerpt from an oral history series by documentarian Anne Queenan recording the contributions of the many citizens who have collaborated throughout the river basin over the past 20 years rediscover and restore the Minnesota River.

A Growing Movement – Scott Kudelka from Anne Queenan on Vimeo.

Photo: Artist rendering of the rapids to come.