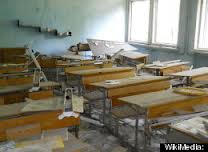 I’ve written before about the challenges that Minnesota Republicans face, politically. I am pleased to report that they are being triumphantly met, via the MNGOP Solution Center. I’m sure I’ll be coming back to this glorious endeavor, from time to time; for today, a few notes about GOP solutions on education, to the admittedly limited extent that my puny left-wing intellect can process such breakthroughs.

The big blue box on the linked page is deliberately vague. But all you have to do is scroll down a bit and look at the sources for “Other Resources” to know where they’re coming from: more charters – that is, corporatization – and attacking public school teachers.

2014 has been aptly named “The Year of the Charter School Scandal,” nationwide. And a study done in the Twin Cities shows that charter schools there are not as good as public ones. In fact, Minnesota would do well to, at the very least, impose a moratorium on new charters until such time as the many, many problems with them are resolved. Which, given the depth and breadth of those problems, is no time soon.

GOP talking points like “accountability” are (transparent) code for crushing teachers unions, and generally destroying respect and support for the teaching profession. That’s bad. Even some people on the left try to be polite and claim that there’s no “proof” that de-unionization badly hurts students, because correlation doesn’t necessarily prove causation. In fact, by a process called “induction,” as well as the application of plain old common sense, one can absolutely state that ending teachers’ rights to unions causes worse schools (see point 3 in the linked article). Then again, worse schools don’t bother a lot of conservatives; they need undereducated kids to turn into misinformed, gullible adults, who are then much more likely to vote for (and in particularly unfortunate cases become) right-wing politicians. And conservatives in Minnesota, and everywhere, desperately need that, in the long term. It’s their only chance.