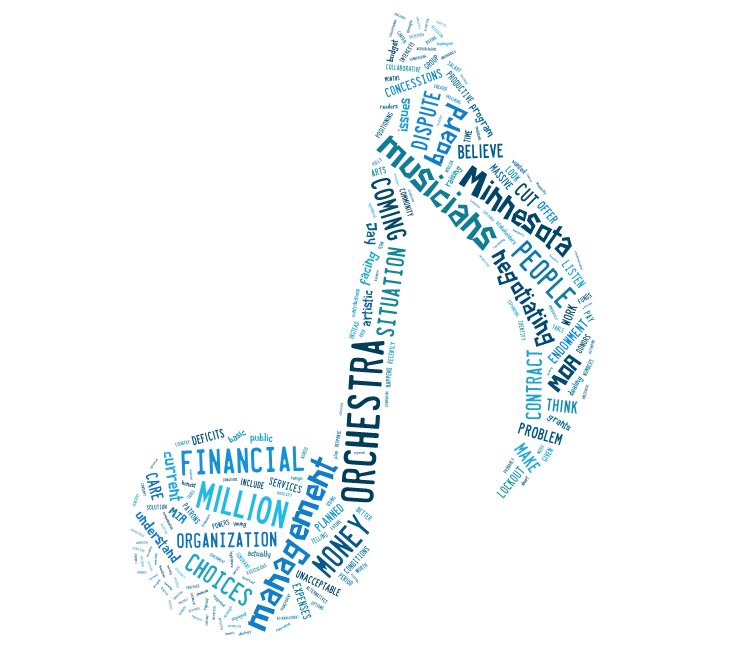 Having recently written posts titled, “Minnesota Orchestra on the rocks: What—if anything—should be done?” and “Does it matter that no one gives a shit about classical music any more?”, I braced myself when I answered the phone last night and the caller identified himself as being with the Minnesota Orchestra.

As it turned out, though, he wasn’t a member of the administration calling to ask why I’m being so hard on one of the state’s most venerable cultural institutions; he was calling me as a past ticket buyer, trying to convince me to buy a discount package of ticket vouchers for next season. I declined, but asked the salesman what he was telling people who asked how confident he was that there would be a next season. Very confident, he said. “No one likes this situation, and we’re confident that an agreement will be reached. It’s a matter of when, not if.” He went on to continue trying to sell the tickets, noting that the discount offer would be “only available during the lockout.”

After hanging up, I wondered how the musicians would feel if they knew the orchestra management was selling tickets at a special lockout discount, and the understandable frustration of many commenters with the orchestra’s administration became even more understandable.

That frustration is by far and away the most frequently and stongly voiced sentiment expressed by commenters on the two posts mentioned above as well as on our poll about what should be done. Here’s what the commenters have been saying.

We love classical music. In response to my initial post, on The Tangential, passionate comments poured in from readers who took issue with my (intentionally exaggerated) claim that “no one gives a shit about classical music any more.”

Kristina Butler said that a professional orchestra is important to the community much in the sense that a professional baseball team is important, and made the case that classical music is an essential part of our cultural fabric. “Can you imagine Indiana Jones, Superman, or Star Wars with dialogue, but no music? […] If the future for music students today is drowned out, our society will be robbed of something wonderful.”

Minneapolis resident Fiona Kelliher went so far as to submit an entire post that we published on The Tangential under the title, “What it means to be a teenager who loves classical music.” That post has now been read over 16,000 times; that’s over five times as many hits as my initial post has attracted.

“What disturbs me is to hear people asking,” Kelliher writes, “who gives a shit about classical music. I give a shit. My quintet gives a shit. My teacher gives a shit. We give as much of a shit as you give about the music that changed your life. But because of the deep divide between the communities, classical and everything else, so to speak, I cannot blame Mr. Gabler for asking the question.”

The Minnesota Orchestra has been mismanaged. That, of course, is a statement of opinion—but it’s an opinion being expressed very strongly by several commenters.

In a popular comment on my Daily Planet post, MaryAnn Goldstein of the Minnesota Dance Medicine Foundation challenges my postulation that the Minnesota Orchestra’s travails are symptomatic of the challenges facing classical ensembles across the country, and accuses the orchestra’s administration of outright deceit. “This dispute is, yes, to a degree about finances—but it isn’t the main issue, nor is the MN orchestra situation all that similar to what other orchestras are facing, since the [Minnesota Orchestra] raised over 50 million dollars during the height of the recession from our very generous arts community. […] The [Minnesota Orchestra] powers-that-be consist of some egotistical, power-hungry people with anti-union ideology who have little interest in collaborative, transparent management.”

Doan Brian Roessler of St. Paul concurs. “The basic problem is arrogant, ignorant, and deceptive behavior on the part of MN Orch management. Put new people who are willing to listen and speak honestly at the table representing the board and a solution can be found.”

Mary Ellen Alden suggests that it may be time for Michael Henson, president and CEO of the Minnesota Orchestra, to resign. She writes that it “seems like much of this could have been avoided if communications and negotiations had been conducted in an honest, respectful, straightforward manner.”

A compromise is possible. Several commenters said that our poll about what should be done ought to have included an option for “compromise,” then went on to say that a more reasonable offer from management would likely be acceptable to musicians and their supporters.

“You didn’t give us an option of the musicians accepting a [salary] cut that is less draconian,” notes Susan Herridge of the University of Minnesota Foundation. “Perhaps in the 20% range, like the SPCO.”

“What about a collaborative, negotiated response that meets the musicians and management in mid-stream and includes public monies granted through due process?” suggests Pixie Martin.

Barbara Raye, echoing Martin, writes that, “either-or, right-wrong positioning is not based on genuine listening or discovery of shared values and interests. There are many productive alternatives yet to be discovered.”

The musicians and their supporters are being unreasonable. No readers have voiced this position in comments, but as of this writing, there have been 21 poll votes for “the musicians’ desired pay level is unreasonable, and they should take the proposed pay cut”—almost equaling the 23 votes for “the management should come up with the money to pay the musicians whatever they ask—whatever it takes.”

“Are your polltakers willing to speak with their pockets too and pay more $$ for their @mn_orchestra tickets? #DoesntGrowOnTrees,” tweets Lee Henderson, adding, “your commenters (read: musicians) are #delusional” and “I suggest they take a class in Arts Management.”

The Minnesota Orchestra specifically, and classical ensembles generally, need to do a better job of self-promotion. This gets at a core issue I was hoping to raise in my Tangential post. Can classical music survive at its current level without making changes in programming or promotion to attract new audiences?

“Just because something has artistic merit doesn’t mean it should be free from competition,” writes Eric Wall in a comment on that post, “a competition the Orchestra has been losing for the past 4 years as ticket sales declined. The audience classical orchestras need to capture is young with disposable income—a group that seems more at home at First Ave then Orchestra Hall.”

(“Young people with or without disposable income do care about this orchestra,” shot back a commenter identified only as Amy, “not to mention some of us other less desirable demographic types, like the middle-aged irate.”)

Hogstad, also commenting on that post, writes, “I’m not convinced the problem is the product itself. Rather I feel the problem is largely in how the product is presented and (not) promoted by people connected to the institution, whether it’s audiences or management or the musicians. […] It really makes me want to see the orchestra sign on a CEO who can make an intellectual and emotional case to you and your friends that it’s in your best interests to try out an art form before you see fit to completely dismiss it or deem it irrelevant.”

To clarify, I haven’t dismissed classical music as an art form—but I’m not convinced that professional orchestras will survive over the long term without making changes to programming as well as promotion. In a 2010 Daily Planet post called “Why we shouldn’t do a damn thing about the decline of classical music,” I cited data showing that the young people who have come forward saying they love attending professional orchestra performances, passionate and articulate as they are, are increasingly in the minority.

“Classical music as we know it is by its nature an art form that resists being tampered with,” I wrote in that post, “and as history marches on, classical music is only going to get more and more distant from the mainstream of musical life, and from the mainstream of artistic life generally. The great works in the repertoire will be preserved as museum pieces, which—like museum pieces in the visual arts and in literature—will be appreciated by the relatively few people who connect with them. Thus, ‘classical music’ will become even less mainstream, and approached by even fewer people, than it is now. The sky is going to fall, and no number of Chicken Littles, no matter how loudly they shout, will be able to prevent it.”

Kelliher hopes the Minnesota Orchestra will earn support and prove me wrong. If the orchestra folds, she writes, “the community of classical-lovers, people like me and my friends, will get smaller and further removed from the rest of the population, who, as a result, will never get the chance for passion to arise. They’ll never hear the concerto that could change their life, or see the silvery flute, or learn the choir song. They’ll see an ever-diminishing group of aficionados, far away from them, and never know if classical could give them joy. That, to me, is a tragedy, and that’s why some of us give a shit about classical music, and that’s why everyone should give a shit.”