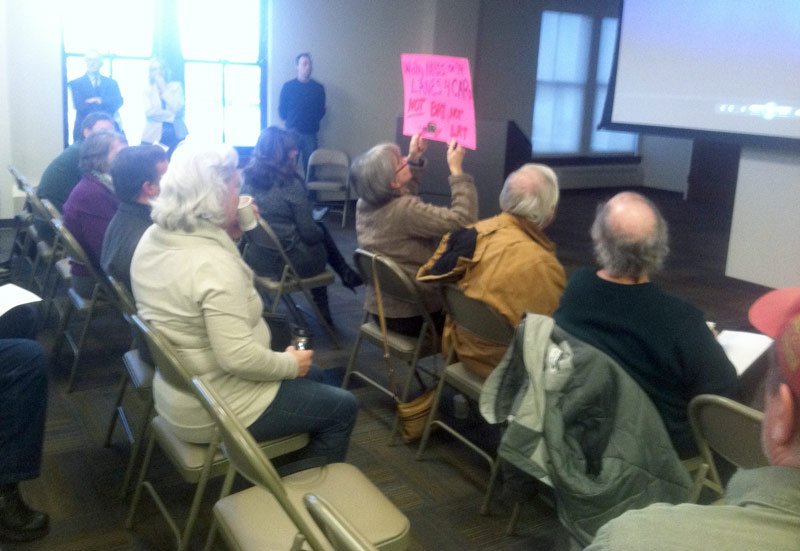 On a slow afternoon a few weeks back, I found myself in the Union Depot in downtown Saint Paul, walking into a “Minnesota Go” event. Minnesota Go is the joint PR campaign put on by MN-DOT and the Met Council tasked with raising awareness of transportation funding shortfall before the 2014 legislative session. MN-DOT head Zelle and Met Council Chair Haigh have been touring the state presenting their respective powerpoints to members of the public, business leaders, and the media.

This is nothing new. Last year, the story was much the same. Before that, there were commissions and task forces, all aimed at “forging consensus” about the future of transportation investments in Minnesota. The Union Depot meeting was probably par for the course. Half the room were people who worked in various transportation fields (planners, MNDOT staff, lobbyists). Maybe a quarter of attendees were media. And the remaining bunch were actual members of the public: four old folks from Woodbury in the front row, with anti-transit signs; a PRT nutball who kept wanting the microphone during the Q and A; maybe a few innocent bystanders; and a bunch of pro-transit/bike/walk people. (I’m one of those.)

After the pie-chart laden powerpoints and the cloying promotional video (“Transportation… It’s about getting from A… to B”), and after the Woodbury militia and PRT guy spoke their two cents, I got to ask Commissioner Zelle my question. Earlier this summer, Richard Davey, the Massachussetts DOT chief had made headlines by announcing a “no new roads” pledge. He said this: 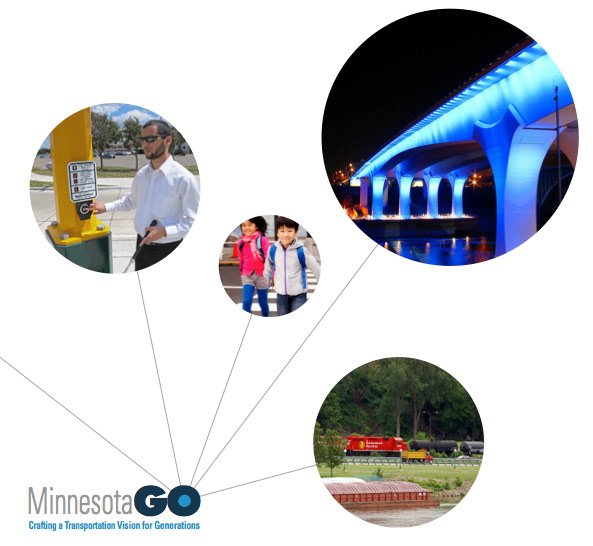 “I have news for you,” Davey said at a news conference yesterday. “We will build no more superhighways in this state. There is no room.”

Right: The handouts could use more kittens riding bikes.

OK the reason is silly, but when they handed me the mic, I asked Commissioner Zelle the same thing: Given the funding shortfalls that he’s just outlined, and considering the environmental and demographic trends facing the state, would he be willing to make a similar pledge? Why or why not?

As I knew he would, Zelle hedged. He said that Minnesota and Massachusetts don’t compare very well because Minnesota is a more rural state.” Then he defended MNDOT’s road expansion plans, saying that they were “looking at limited additional capacity”, and was conducting a careful “lifecycle analysis” of the new roads to make sure they were worth building.

Naturally, I was disappointed. Last year, there was actually a chance for the state to pass meaningful transit investment without having to choke on the bitter pill of additional money for freeway expansion. But for some reason, the Governor and Speaker Thiessen (from Minneapolis, of all places) choked at the last second, and didn’t push for metro area transit investment. This year, transit advocates face long odds, and have opted to hold their noses and join forces with the pro-road lobby. Nobody seems really happy about it, but in an election year, the people I’ve talked with think that a grand bargain coalition is their only chance at getting a metro area transit sales tax passed.

How Rural is Minnesota? Do We Have Enough Roads? 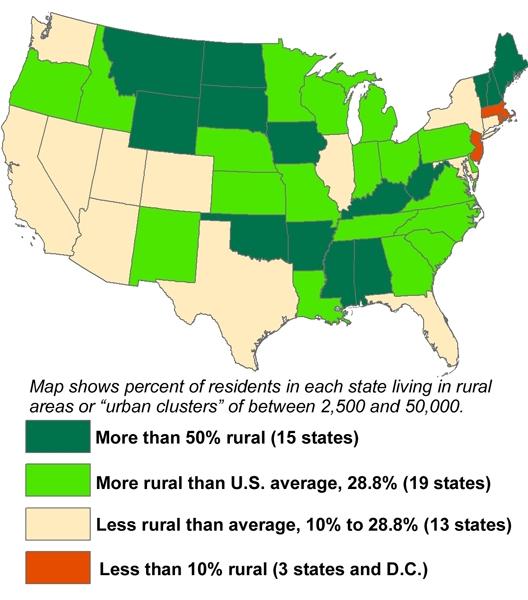 Commissioner Zelle is right about one thing. Minnesota is more rural than Massachusetts, at least by US census classification. Minnesota’s population is just over 70% urban, while Massachussetts’ is just over 90%.

But that difference isn’t huge. And there are two problems with MNDOT’s argument. The first is that the Twin Cities’ metro is already overbuilt. On a per capita basis, the Twin Cities’ ranks right next to Houston, Atlanta, and Saint Louis in terms of the amount of already constructed roads.* There’s no way that our transit investments will pay off if we continue expanding our urban population along ever newer, ever wider highways.**

The second problem is that I’m not sure that road expansion (e.g. bypasses) aren’t even good for rural economies. You’d have to dive into the Strong Towns literature to think through this fully, but in my experience, the main consequence of building a 4-lane bypass around a small city is the subsidizing of big box retail, and the abandonment of the main street. (I was just talking to a man from Blackduck who told exactly that story…) 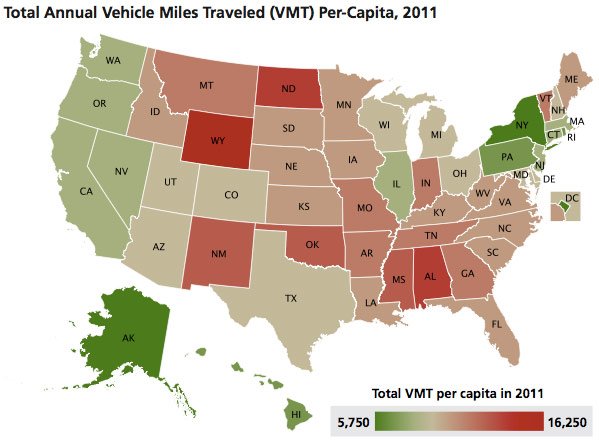 Minnesota has a long way to go if it wants to reduce car dependence. 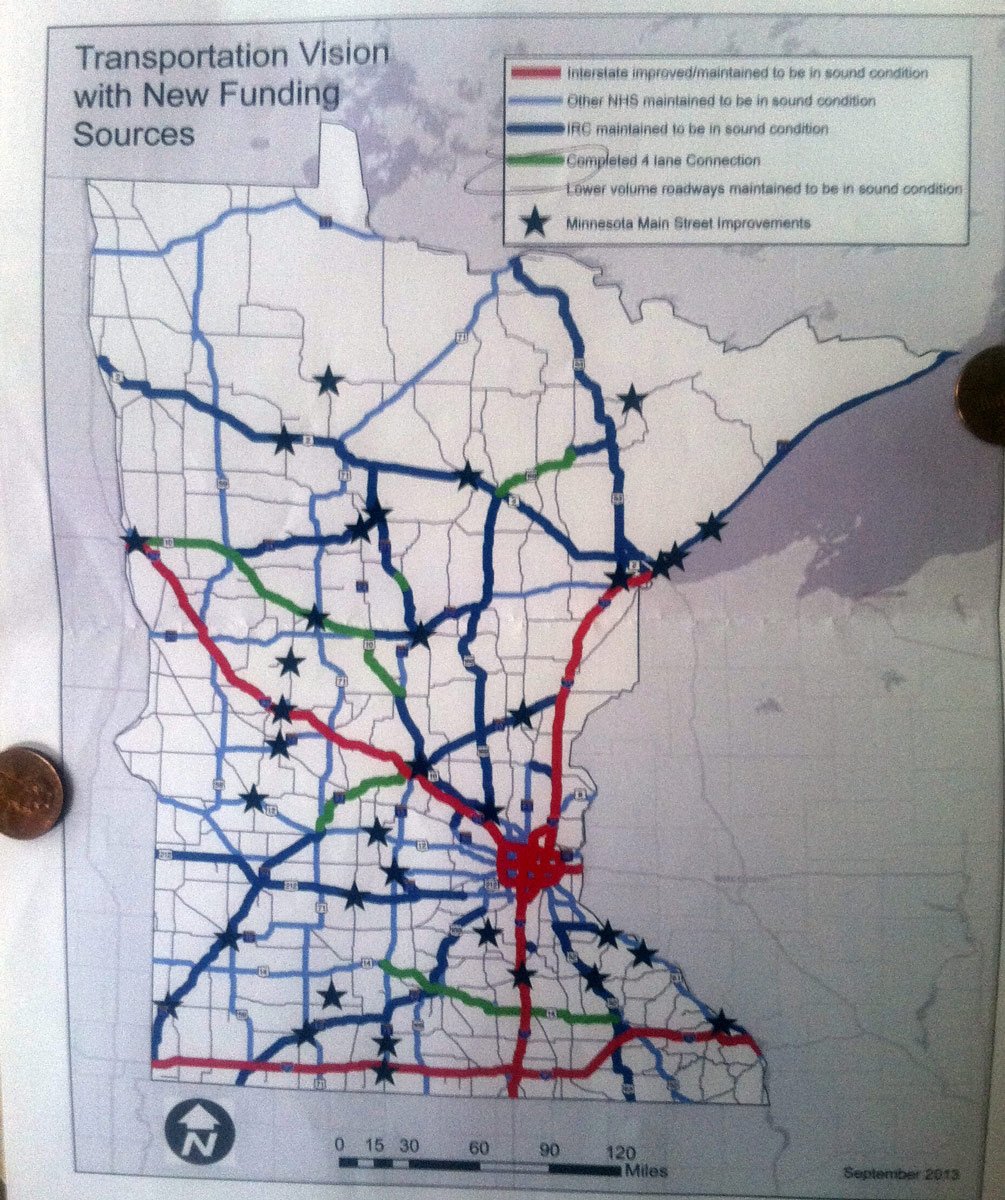 Where are the New Roads?

The “Minnesota Go” presentation included a map of the planned “limited capacity expansions” (a.k.a. new roads), and they’re mostly rural connections: US Highway 10 from Fargo to Little Falls, and State Highway 14 from New Ulm to Rochester). I’m not sure of the price tag on these two projects, but they should be looked at with a critical eye, and updated VMT projections in mind.

But these green roads aren’t the problem. The real issue is the current MNDOT spending priorities. If you look at the recently released “Corridors of Commerce” proposal, MNDOT’s seems focused on expanding sprawl. The two largest items are an expansion of I-94 by exurban Rogers (pop 10,000) and an expansion of the 610 ring road out past the edge of Maple Grove (also near Rogers). These two (very similar) freeway expansions account for over half of the $300M “corridors of commerce” budget.

(Question: Why would Mark Dayton go out of his way to build massive new freeways for Rogers, a town whose voters elected Rep. Joyce Peppin, a card carrying member of the Taxpayers League, by a 2/3 margin?)

The Politics of a No New Roads Pledge

There’s no doubt that transportation investments are deeply political. Not only do people like Chris Christie and Rob Ford use road and transit projects like giant weapons, construction unions and real estate developers have huge influence at the state capitol. So I understand how difficult it might be to re-think MNDOT’s role as a state sprawl machine.

But as a lefty urbanist, it’s impossible to take the Minnesota Go campaign seriously when MNDOT’s actual spending priorities remain fixed on expanding exurban freeways. Zelle’s mumbling about having a “fix it first” policy means next to nothing when MNDOT is spending almost a billion dollars on new highways and bridges to Rogers and Albertville (Pop. 7,000) or Houlton, Wisconsin (Pop. 386). Quite frankly, the “chicken little” narrative with which MNDOT is framing their campaign (e.g. “The bridges are falling, we need $21B just to maintain everything!”) seems downright dishonest as long as we’re expanding freeway lanes into exurbia.

What would the political landscape look like if Zelle publicly announced a “new new roads” pledge? What if the proposed new taxes actually were invested in maintaining our existing infrastructure, and expanding our transit system? That would be something that urbanists, environmentalists, and transit advocates might actually support. Who knows, maybe you could convince a few conservative, low-tax types too.

Until then, if you think the Minnesota Go campaign isn’t business as usual, I’ve got a bridge I’d like to sell you. 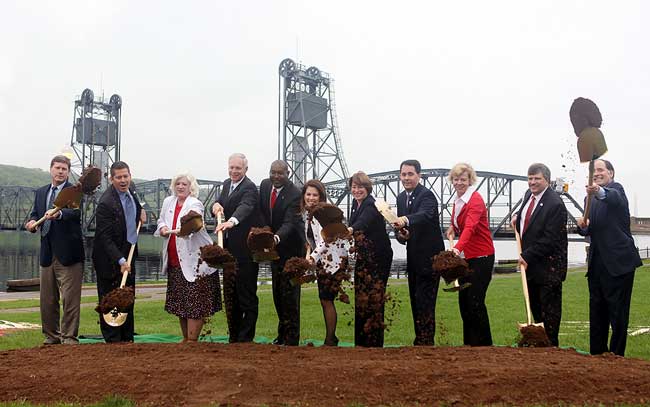 Walker Dayton Bachmann Klobuchar BFFs. (Zelle is on the far right, having the most fun.)

** For the record, I tried hard, but failed to find decent roads per capita numbers at the state level, other than finding out that North Dakota and Texas are at the top of those lists… Heck, I even skimmed through the odious Texas Transportation Institute’s Mobility Report, to no avail.