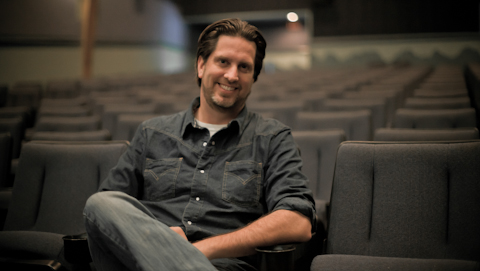 Eric Howell at the Lagoon Cinema. Photo by Jeff Rutherford.

A little movie featuring the Cedar-Riverside neighborhood in Minneapolis is making big news in Hollywood.

Ana’s Playground, a Minnesota-made short film about children living in armed conflict, has been selected as one of 10 live action short films that will advance in the voting process for the 83rd Academy Awards.  Seventy-six pictures originally qualified in the category.

Director and writer Eric Howell knows it’s going to be competitive. After all, it is the Oscars.

“The other nine films are amazing films, so I think our work is cut out for us. It’s going to be a tough run. But I want to win. I’m not going to be bashful about it,” he said in an interview at the Lagoon Cinema in Uptown. “At this point it’s one of those things where you almost don’t want to think about it because it’s so out of my control. It’s based on other people’s opinions and I can’t influence it so you kind of Zen out on it a little bit.”

Set in a non-specific, war-torn country, Ana’s Playground is an examination of children living and dying in a world of armed combat. Told through the eyes of 11-year-old Ana, the story opens on a group of children playing soccer surrounded by signs of conflict. When their soccer ball is kicked into a sniper zone, Ana is sent in to retrieve it. Once inside, a dangerous game of cat and mouse ensues. The audience is kept guessing as to how the story will reach its ultimate conclusion: will their games end up in harmony or tragedy? 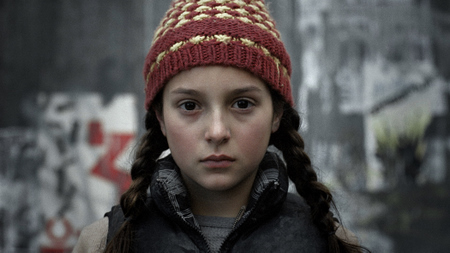 Raven Bellefleur, the actress who plays Ana, leads an all-Minnesotan cast and crew.  Released in September 2009, the 20-minute film was shot in the Cedar-Riverside neighborhood in Minneapolis on a film shoot organized by producers Jillian Nodland and Marsha Trainer.

Howell said he had been looking all over the country for just the right spot to shoot his movie. “Marsha called me and said, ‘Hey what about this place, Cedar-Riverside?’ As soon as she said it, I hit my myself on the head. I had never considered it and I drive past it every day. It’s one of those moments when something is so close to you that you can’t see it. When she said Cedar Riverside, I was like ‘Oh yeah, that’s it.'”

Cedar-Riverside is the backdrop for the movie. Howell said they picked the locale for its architecture and its ability to look like any city, any place in the world. Ana’s Playground is centered on war, and Cedar-Riverside needed to be roughed up a bit to make it appear war torn. “We damaged the buildings ourselves in post-production. We made it look run-down. Cedar-Riverside is actually very clean and well-kept. If you walk around the neighborhood there’s not litter anywhere on the ground. They have pride in their neighborhood,” he said.

A long list of other Minnesota industry involvement with the film appears in the credits, including soccer coaching by Leo Gibson of the former Minnesota Thunder soccer team and IFP Minnesota Center for Media Arts.

When Howell needed set pieces, he sent his production designer to Augsburg College and presented their sculpture class a challenge of crafting a fountain for the film. “They were very receptive. The whole administration and faculty of Augsburg was phenomenal. We gave the students the portion of the script that describes what Ana is hiding behind. And based on that description, and the needs I had as a filmmaker, the students then turned it into an assignment. Every student created a maquette—a small model,” said Howell.

After all the ideas were blended together, the students were also involved in making the final, styrofoam prop. “I think the sculpture is still at Augsburg,” said Howell.

Raven, in a footage interview from the set of Ana’s Playground, said the styrofoam fountain is an important feature of the film, because for much of the story the character Ana tries to hide behind it. 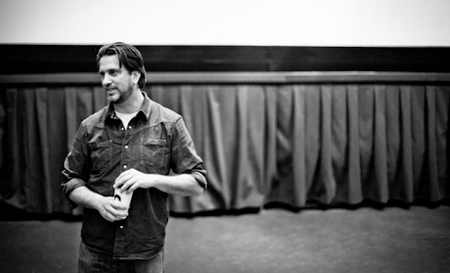 Howell, 39, began Ana’s Playground while a student at the Minneapolis Community and Technical College’s screenwriting program as an assignment. “I was to write a script using no dialogue because true cinema doesn’t rely on dialogue. That was the exercise. I just happened to be reading about snipers in Sarajevo during the siege of that city and that is the world I created. I wanted to take an audience’s empathy and shift it from protagonist to antagonist in a single moment. From that idea, I put it in a setting,” he said.

Production of Ana’s Playground was made entirely through charitable donations. George Lucas’s Skywalker Sound provided all sound engineering post-production; and the Coen brothers’ production of A Serious Man, also filmed partly in the Twin Cities, donated much of the physical set support.

The producers offer the film as a fundraising and publicity tool to non-governmental organizations working to improve the lives of war-affected children. The films promotional materials and screening events are intended to provide exposure opportunities for these groups. Some of the groups, said Howell, are Right to Play and the National Peace Academy. Howell arranged for the soccer equipment manufacturer, Mazamba, and the 34th Red Bull Infantry Division to distribute a thousand soccer uniforms to children in Iraq and other countries.

Howell is enjoying his increased popularity since Ana’s Playground advanced to the top ten in the Oscar race. “My beautiful wife is starting to call me Mr. Howell now,” he said with a laugh. A graduate of Armstrong High School, he has been in the movie business for 20 years, starting out as a special effects technician for the movie Drop Dead Fred. He lived with his dad on a houseboat near Harriet Island, where his father still lives.

“It’s been a long road. I did live out in LA but I moved back to Minneapolis. LA can stifle creativity and I have representation here.”

Howell developed his directing skills by working as a stuntman/coordinator on numerous feature films including North Country, Joe Somebody, Fargo and A Simple Plan as well as hundreds of TV commercials and music videos. Howell earned history with his film The Interview, the first motion picture to be shot on film and debuted on the Internet.

He continues in his stunt work, directing, and is involved in a project for Jostens with filming at Kennedy High School in Bloomington. Howell often travels to impoverished locations around the globe to document the children who live there.

Ana’s Playground just won the Grand Prize Award from Fade In magazine for screenwriters. Howell, who said he writes every day, would like to turn Ana’s Playground into a feature length film.

“My hope of hopes is to become a member of the Academy. To work at that caliber is what my goal is. I want to work with the brightest and best in the world. I don’t have an interest in just making a movie that I watch with my family. I want to reach an audience. The most powerful weapon in the world is film and used properly it can inspire so many things.”

The 10 live-action short films are listed below in alphabetical order by title, with their production company:

Next up for the film is a second round of voting where Ana’s Playground will screen along with the other nine films in Los Angeles, New York, and San Francisco in early January.  Ultimately, three to five short films will be officially nominated in the short film category. Those names will be announced during a live ceremony on January 25, 2011. The 83rd Academy Awards will be presented on Sunday, February 27, 2011 at the Kodak Theatre at Hollywood and Highland Center and be televised live on ABC.

(Above) Helicopters fly into Cedar-Riverside in the ficitonal city created for the film Ana’s Playground. 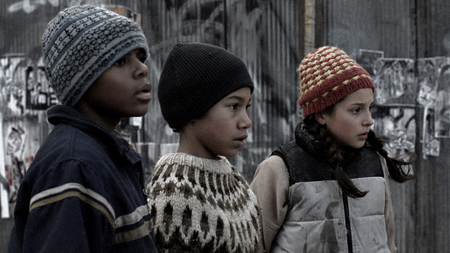 (Above) A grafitti artist was hired for some of the set design.

(Above) Minnesota actor Alaina Lucy Rivera on the set of Ana’s Playground.