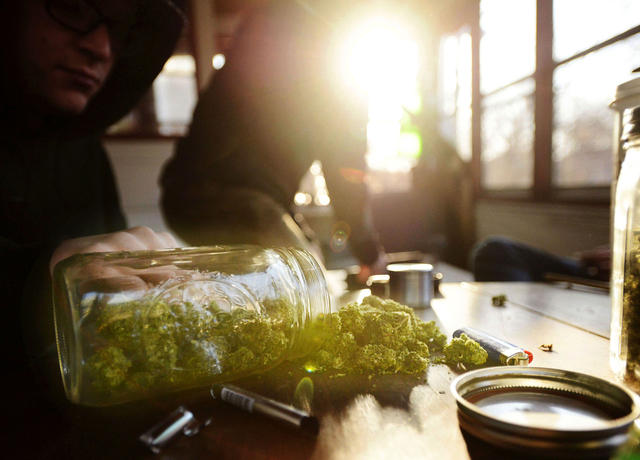 A jar of marijuana sits on a University student's table Monday afternoon. The Minnesota chapter of the National Organization for the Reform of Marijuana Laws is working to draft legislation to legalize marijuana. (Photo by Bridget Bennett)

Randy Quast was sitting in his dining room when a SWAT team broke open the door of his Minneapolis rental home with a battering ram.

Quast, a retired businessman, had purchased more than 1.5 ounces of marijuana for his personal use — a felony amount in Minnesota.

The incident inspired Quast to become involved with the National Organization for the Reform of Marijuana Laws and to start a Minnesota chapter. The organization is now working to push legislation to legalize marijuana in Minnesota.

Earlier this month, citizens in Colorado and Washington voted to legalize the possession of small amounts of marijuana for recreational use for those at least 21 years of age.

NORML is in the process of working with attorneys and the state Legislature’s Revisor’s Office to draft legislation that would regulate marijuana like alcohol in Minnesota, Quast said.

The results in Colorado and Washington gave Quast and Minnesota NORML a blueprint to push for similar laws.

For any decriminalization bills to pass, she said NORML needs to lobby for support from “more moderate” districts and the state Senate after drafting the legislation.

University of Minnesota students like dance junior Kristine Zappa were generally in favor of marijuana legalization.

“If people in Colorado and Washington use [the new laws] wisely and act as a positive example for the rest of the country, people who thought that it could be negative might see that it’s actually pretty safe,” she said.

“I don’t think marijuana hurts anyone,” food science senior Aly Longendyke said. “It’s a natural part of being on campus.”

Although many students didn’t see harm in legalization, Dave Golden, director of public health at Boynton, said marijuana can have negative consequences for users.

Boynton’s 2008 Health and Academic Performance report found the average GPA for students who used marijuana within the past 30 days was 3.11 — a quarter of a grade point less than those who didn’t.

Golden said while some patients say marijuana use is “not a real big deal,” there are actually many negative health effects.

“The equivalent of three joints is like a pack of cigarettes as far as some of the same ill health effects that we associate with tobacco,” he said, adding that marijuana can also be psychologically and physically addictive.

NORML’s position on legalization is that the first people who should get marijuana are those with a medical need.

“We think the best way to accomplish that is just to legalize it outright … it’s safer than alcohol and tobacco,” Quast said.

Some Minnesota legislators have pushed for legalizing medical marijuana in the past.

Sen. John Marty, DFL-Roseville, co-authored a bill with Sen. Steve Murphy in 2009 that would legalize marijuana in the state.

“I’ve been one who thinks our drug policies are counterproductive in many cases,” Marty said. “I think we should treat drug use more as a health issue than as a criminal issue.”

“There are some patients who do benefit from the use of [marijuana],” Golden said.

Beyond medical use, some say there are economic reasons for legalization.

“It’s probably a good money maker for the states,” he said.

Governments in Colorado and Washington are waiting to see how the federal government responds to their recently passed laws, the Associated Press reported.

Federally, marijuana is illegal in all states — even medically — so a legal challenge could come from the government.

Quast said NORML hopes to have legislation drafted by Jan. 8, when the state Legislature convenes for its 2013 session.