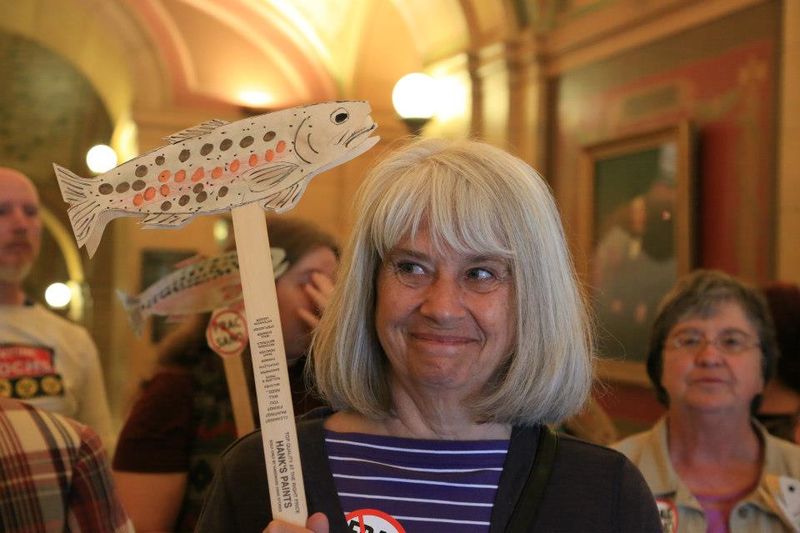 A frac sand industry-friendly compromise has been reached in the Minnesota legislature over mining near trout streams. Meanwhile, a new report commissioned and published by the Wisconsin Farmers Union, the Wisconsin Towns Association and the Minneapolis-based IATP suggests that industrial sand mining falls short as an engine of job creation.

The lawmaker who has pushed this year for tougher state regulation of the frac sand mining industry said DFL legislative leaders have reached a compromise on the legislation.

Lawmakers agreed Tuesday to create a new Department of Natural Resources permit for companies hoping to mine silica sand in certain sensitive areas in southeastern Minnesota, said Sen. Matt Schmit, DFL-Red Wing. Schmit said the regulations will be part of the spending bill that covers natural resources, the environment and agriculture.

Schmit and DNR Commissioner Tom Landwehr had been pushing to prohibit sand mining within one mile of a trout stream or spring in the “Paleozoic Plateau Ecological Section” of the state, which includes Dakota, Goodhue, Houston, Fillmore, Olmsted, Wabasha and Winona counties. The compromise expected to gain conference committee approval would instead require a hydrological study and DNR permit for any mine within a mile of a trout stream but not springs, Schmit said.

“What this gives us is stricter scrutiny in the most sensitive regions of southeastern Minnesota,” Schmit said. “If that study proves that mining will have no or limited impact on our waters, then we can move forward with the DNR permit, so I think this is a good compromise. I do think it gives notice that the areas around our trout streams are going to be watched very closely and creates an incentive for mining to take place elsewhere.”. ..

Read the rest of the article at MPR. The Star Tribune’s Tony Kennedy reported in Compromise frac sand deal nixes effort to put trout stream areas off limits to mining:

In a retreat from tough language that would have put much of southeastern Minnesota off limits to frac sand mining, state officials have reached a compromise that will allow mines near the region’s trout streams, but only if companies follow new permitting rules.

As part of a deal announced Tuesday, Sen. Matt Schmit, DFL-Red Wing, said he’ll drop his effort to ban frac sand mining within a mile of any trout stream in the southeast corner of the state. The ban was embraced by Gov. Mark Dayton until a compromise emerged at a recent meeting with Schmit, industry lobbyists, three state agency heads and organized labor.

If the deal goes as expected, the 2013 legislative session will end without sweeping statewide environmental protections sought by a throng of “fractivists” from areas around Red Wing, Wabasha, Winona and other parts of the bluff country known as Minnesota’s Paleozoic Plateau. . . .

Lovely. Read the whole sordid tale of corporate power over people at the Strib, where opponents try to put the best face on this deal. The Winona Daily News has more in Compromise reached to permit frac sand mines near trout streams.

Those cheerleading the strip mining of Minnesota’s Bluff Country carry on about jobs, usually citing figures promotedby the Heartland Institute, but those projections have their critics. Yesterday, the WFU and other organizations released a new report about the economics of Wisconsin’s industrial sand mining.

The study, conducted by Thomas Power, a retired University of Montana economist and an expert on the economics of mining, concluded that the economic effects of silica sand production used in mining is likely to be quite small.

Drawing from data collected by the federal government and the state of Wisconsin, production could create about 2,300 jobs, but that’s less than one percent of total employment statewide. The frac sand region creates about the same number of jobs in all categories every two months, Power said.

Read the rest at MPR. Here’s the report:

Photo: Citizens seeking legislative relief for themselves and trout were disappointed by a compromise with weak protections for trout and other living things.