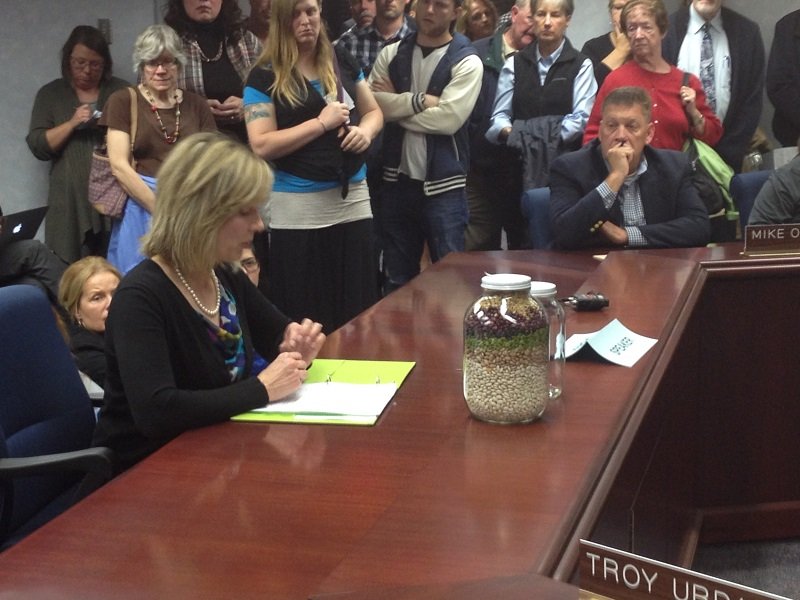 Zeam Porter just wants to play basketball. A trans youth who is a junior in high school, Porter played for the women’s team last year, and was constantly misgendered and called the wrong name. Porter won Most Improved Player, but today feels the trophy was a lie.

“My love for basketball last year made me believe I could handle being on the wrong team,” Porter said. “I love basketball. Do not take basketball away from me. I am not going to play on the female team.”

Porter expressed their concerns Thursday morning, Oct. 2, at the Minnesota State High School League board meeting, where proponents and opponents discussed whether or not to support a policy that would allow transgender students to play sports based on the gender with which they identify. The current draft of the policy was discussed on Wednesday night and Thursday morning, but after more than two hours of testimony and mounting opposition, the MSHSL board voted to table the discussion until the Dec. 4 meeting.

The current draft of the policy, which was revised after Wednesday night’s meeting, states that in order for a student to play on a team whose gender is different than what they were “assigned at birth,” the student and/or their parent/legal guardian must contact the school administrator or athletic/activity director about the desired change. The policy doesn’t specify whether parent approval is required.

The school then reviews both the student’s gender identity for their school registration records and documentation from “medical personnel, acting within their scope of licensure, that the individual has been diagnosed with gender dysphoria and is receiving appropriate clinical treatment,” the policy states. After the school makes a determination, the student and/or the student’s parent/guardian may appeal through MSHSL’s Fair Hearing Procedure.

Other changes made to the policy after Wednesday’s meeting include adjusting some terms such as “transgendered” to “transgender,” and cutting language that encouraged transgender awareness building in schools.

At the community meeting on Wednesday, MSHSL executive director David Stead announced that the board of directors didn’t change any bylaws in regard to participation of student athletes, and noted that the Minnesota Child Protection League didn’t use a current draft of the proposed policy in their full page ad in the Star Tribune against it. The current draft of the policy, he said, does not discuss locker room policy, adding that private schools are not excluded from being in the league, contrary to the ad.

Stead stressed that the policy doesn’t mean that schools “have to do these things.” “It’s a matter of awareness. Be aware. You might want to have a plan in place.”

Opponents of the new policy expressed student privacy and protection concerns in locker rooms, and said such a policy would give an unfair advantage to transgender women in sports because of their biological build.

“The whole point of separate teams is to ensure that girls have a fair chance to make the team and the competition is safe and fair,” said Melissa Coleman, an attorney mother of five. “If adopted, this policy would discriminate against females.”

A number of speakers from religiously affiliated organizations stressed their desire that the policy explicitly exempt religious schools from being required to follow such a policy. Jeff Mattner, the Regional Director of Association of Christian Schools International said the policy was “stepping on the rights of religious schools.”

But proponents at the meetings said the policy is necessary to prevent transgender discrimination.

“Many states have policies that are similar, around ensuring that there isn’t discrimination around trans youth,” said Monica Meyer with OutFront Minnesota.

Allison Yocum of Transforming Families Minnesota, an organization that supports families who are gender creative and transgender, said the policy would allow transgender teens to fit in, be accepted by their peers, achieve their goals and be affirmed.

“This is just the right thing to do,” Yocum said. “Since when does Minnesota exclude individuals from any activity based on something such as their gender or anything else related to them?”

Jennifer Tell, a parent of a transgender child, said her child knew he was a different gender at age two. Tell said she experienced denial and fear, but joined support groups to work through it. Her son never wavered from his claim, she said, and he’s happier for it.

“My son is a very well adjusted happy, healthy fifth grader,” she said. “When he saw the story in the news, he couldn’t believe he could be denied playing sports with his friends.”

Licensed psychologist and University of Minnesota lecturer Julie Tilsen said that while people concerned about this policy express fear for the safety of female student athletes, “the stark statistical truth is that trans and gender non-conforming youth are at far greater risk for bullying, physical and sexual harassment, and violence.”

The panic over these students playing sports, she said, is based on “old and highly sensationalized stereotypes.”

Twin Cities Youth Rowing Club co-founder and former head coach Tina Cho said she’s disappointed by the board’s decision to table the policy vote. Many LGBT youth come to her organization because they don’t feel accepted in the sports programs at their schools, she said.

“Sometimes inaction is the worst thing you can do,” Cho said. “At home there are students that are hurting, that have been hurting, that were hoping to get some validity finally, and they still don’t have that.”

Café Southside co-owner Roxeanne Anderson said it’s not all a loss and there’s much to celebrate after the past few days, referring to the Porter’s work organizing to garner support for the policy and circulating a petition against the Star Tribune ad.

“An activist was born within the process and that’s good,” she said. “I think from Zeam’s ability to push through and be courageous, other young folks will come forward. By December we will be able to convince the board to adopt the policy.”