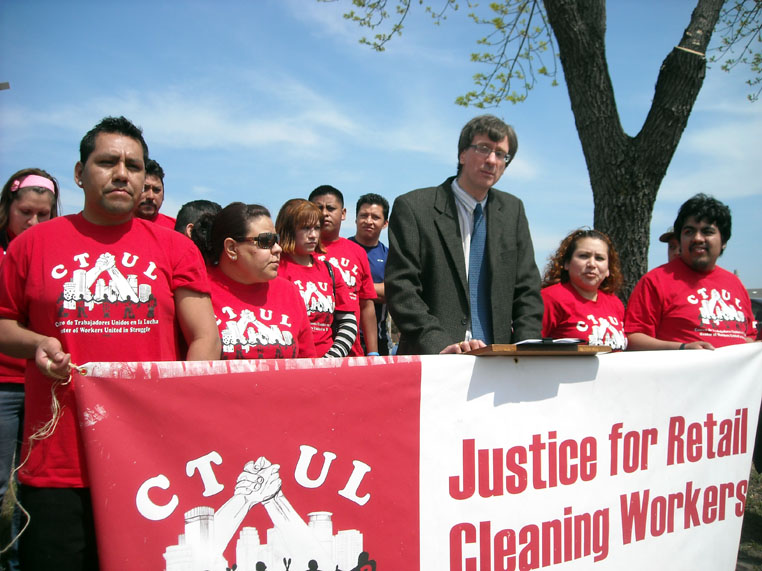 On Wednesday April 25, about a dozen workers held a press conference outside of the Kmart on Nicollet Avenue and Lake Street to reiterate the complaints that they made in a lawsuit filed last year against Diversified Maintenance Systems for requiring them to work up to 80 hours a week without overtime pay. Diversified Maintenance Systems is a nationwide cleaning contractor for retail stores including Kmart, Target and Best Buy. The workers were joined by other members of the workers’ organization CTUL (Centro de Trabajadores Unidos en Lucha or the Center for Workers United in Struggle).

Their press conference coincided with a report released by CTUL, which points out historical wage problems among many retail cleaning contractors, over the past ten years.

“We’re here today because we’re fighting to make sure our rights are being respected,” said Alejandro Quirino, who cleans Kmart and Best Buy stores contracted through Diversified. “We don’t want to see our rights violated.”

According to CTUL’s report, over the last five years, Diversified has been subject to at least seven private lawsuits as well as an investigation by the US Department of Labor.

“I am not asking for anything extra,” Baeza said during her speech at the press conference. “Just to be paid what I am owed.”

Baeza also claimed that Diversified threatened her when she complained, telling her that “the doors of the store were very wide and [she] could leave if [she] wanted to.”

Diversified is also subject to some more serious charges, says Michael Healey, the attorney for the 12 Minnesota workers filing suit against Diversified, such as fraud. According to Healey, Diversified would issue the first 40 hours’ pay on the actual employee’s social security number and issue any overtime pay on a “ghost employee’s” social security number (typically a past employee that no longer worked for them). This allows Diversified to avoid the overtime wage increase by spreading the hours out among two employees.

As for now, the workers are hoping to work out their grievances through a settlement with Diversified.

“I would hope all of the wages would return,” said Healey, when asked about how he wanted this to end, adding that he hoped that his clients also would receive punitive damages.

They are attempting to receive class certification for the lawsuit, says Healey, since these events seem to be happening in many states, not just Minnesota.

CORRECTION: The press conference was held on April 25, 2012.