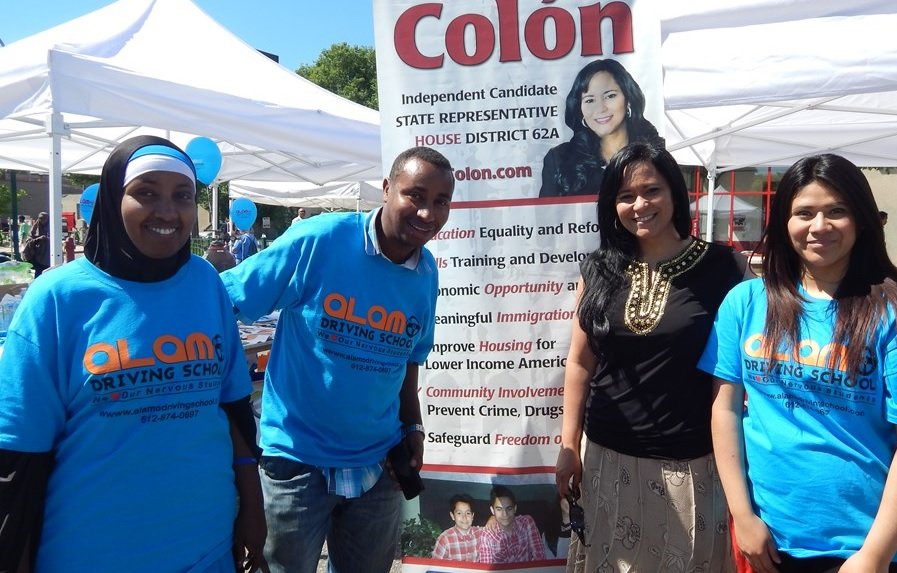 Yolandita Colón is a bit of an anomaly. On the one hand, she seems to stand for progressive causes like educational equality, meaningful immigration reform, improved housing for all, and human rights and social justice. On the other, she favors lowering taxes for businesses and business owners, and has very conservative stances on social issues such as abortion and same sex marriage.

An evangelical minister, Colón isn’t following the typical trajectory for Latina candidates by seeking DFL endorsement. Instead, the 62A State Representative hopeful is running against incumbent Karen Clark as a candidate of the Independence Party. She said her platform will unify her constituents and find common ground between both major parties.

Colón used to be a Democrat, she said, just never a devout one. She’s frustrated by how much division she sees in politics today, she said, and she thinks people will vote for a candidate who simply holds the same values as them, despite their party affiliation. “People don’t vote for parties,” she said. “They vote for values, they vote for what they believe. And whoever has what they believe, that’s how they vote.”

Colón was born in New York but brought up for part of her childhood in Puerto Rico, where her family is from. She decided to get into politics when she started working with immigrants as an evangelical minister with her husband in Faribault, she said.

Together, they ran New Life in Christ International Church, where she said her eyes were opened to the issues immigrant communities faced, like lack of equal opportunity and separation of families through deportations.

Other parts of Colón’s campaign align with DFL ideology too, like addressing homelessness in Minnesota, which she says is a real problem in the state and needs more attention. “Obviously what we’ve done so far is not enough,” she said. “We have to do more.”

For education, Colón sees that in her own neighborhood in south Minneapolis, there are faith-based schools that “are doing better with the same kinds of students from the same neighborhood,” she said. “So maybe we can learn from these schools. What are they doing differently?”

Colón said she would support vouchers for private schools. Her own children started off attending public schools, and then after homeschooling for a year, they now attend private school, she said.

Colón’s campaign also addresses things like human trafficking and ISIS recruitment, which she said plagues the Somali community in Minnesota. To address these concerns, she said, she favors a task force approach, made up of government officials and business and nonprofit entities.

These task forces would also help with issues like homelessness and immigration reform, she said, and the task force could be made up of people from “different sectors and different racial backgrounds.”

A diverse task force could find ways to better integrate immigrants into the community, she said, with dignity and economic sustainability. “Everything doesn’t have to come from the government,” she said. “Everybody can put their own two cents to make this happen.”

But on social issues like abortion and gay marriage, Colón seems to lean much more conservatively. She supports the Imago Dei Campaign, whose central statement, according to their website, is that “every human being, in and out of the womb, carries the image of God.”

When asked about this, Colón said she supports the campaign because it affirms “the worth and dignity of all human beings.” But others believe the campaign merely masks old religious messages, like anti-abortion, in softer language.

Then last year, Colón signed a marriage solidarity statement that proclaims that “Marriage is ontologically between one man and one woman, ordered toward the union of the spouses, open to children and formative of family.”

When asked about the statement, Colón declined to comment.

So far, Colón’s campaign Facebook page boasts of many endorsements from different segments of the community, including Lake Street business owners and Latino community leaders. In addition, she’s been endorsed by the Minnesota Chamber of Commerce (you can see the survey she filled out for them here). And she said she’s enjoying getting endorsed by both Democrats and Republicans. “I love being able to get both worlds and be a bridge,” she said.