Last night, the Minnesota House decided that amendment using the same 40-hour per week standard to calculate overtime for farm workers was not germane to a bill designating March 31 as Cesar Chavez Day.

Chavez gained fame–and notoriety in some corners at the time–for organizing farm workers under the UFW banner.

In the video below, Representative Jeanne Poppe (DFL-Austin), who is chair of the House Ag Policy Committee, rises and reads a prepared statement asking for the amendment to be ruled non-germane.

Madame Speaker, we have before us a bill to commenorate Cesar Chavez. We have an amendment to the bill that actually makes the work of Cesar Chavez relevant in Minnesota after we unfortunately were not able to pass that as a broader bill this session. Agriculture workers in Minnesota deserve the same 40-hour work week that every other worker in Minnesota should enjoy and just because the federal government exempts them, doesn’t mean that the work of the great Cesar Chavez and ag workers organizing around the nation should not be honored in Minnesota in this way.

And finally, Section 10 of statute actually does contain provisions related to employment. So, if you added up the great latitude that you have as Speaker Pro Temp on a germaneness ruling with the very loose definition provided in Mason’s and in House rules and the fact that this is a highly logical and appropriate followup to the bill before us, I urge you to find the point of order not well taken.

The Uptake video below next switches to amendment author Hansen’s remarks:

You know, everyday when we sign in, we hear the Pledge of Allegiance and the good folks back here (gesturing to the back of the chamber) always say “Justice” very loudly. And if you look at the background of Cesar Chavez, he wasn’t that popular during his lifetime.

The bill talks about the justice and the effort working that Cesar Chavez did. We often say words when we recite the pledge. We can implement legislative days, and we can institute policies to make those happen, and that’s what my amendment does and I would hope the adivce would be considered well-taken. 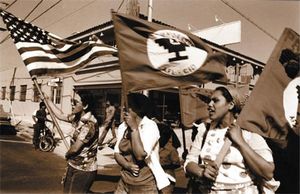 Alas, it was not to be. The Speaker Pro Tem agreed with Poppe’s objection and the body was asked to affirm it, which they did. There’s certainly a desire to not discuss this measure–although ruling the amendment non-germane also relieved the body of considering Representative Marion O’Neill’s forced choice between justice for farm workers and a 12-week unpaid parental leave, that Bluestem considered in Si Se Puede: will the MN House serve justice for ag workers & parents–or a politics of division?

It’s the Minnesota House version of what MinnPost’s Doug Grow wrote about in Would a Cesar Chavez Day level the playing field for Minnesota’s farmworkers?

Photo: Farm workers marching under Chavez’s UFW’s banner. If their daughters and granddaughters work long hours, overtime pay doesn’t kick in until after a 48 hour work-week. But Minnesotans can commemorate their leader’s birthday. No extra charge.