The Affordable Care Act (ACA) will be in full force sooner rather than later, and U.S. Congressman Keith Ellison says every American will benefit from it. However, he sadly points out that there are “professional misinformation spreaders trying to confuse people” on the law. 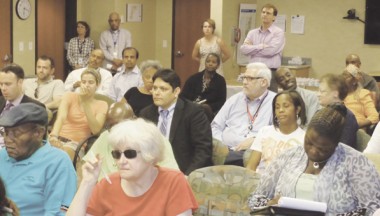 Approximately 30 people were in attendance at the July 2 NorthPoint ACA forum.

Ellison held two separate forums on the ACA July 2, first with local small business owners at the Minneapolis Urban League’s Northside headquarters, then with community folk across the street at the NorthPoint Health and Wellness Center.

The first was attended by around 20 business people, but none were Black business owners. “We certainly reached out,” said Ellison of this absence. “We have been in contact with a number of [Black businesses] already.”

However, Minnesota Black Chamber of Commerce (MBCC) President Lea Hargett last week told the MSR in a brief phone interview, “We [the Chamber] didn’t receive anything [on the Ellison event], but quite possibly some of our members may have received a notice.”

She added that the MBCC a couple of months ago surveyed its membership for interest in learning more about the ACA. “Their primary comments were [that] they did not know how the changes would really directly affect their businesses,” Hargett pointed out. Some members expressed concern about being “forced” to provide employee health insurance “that would make it very difficult for them as a small business to continue to operate, because they are not able to get the kind of rates that larger companies are able to get,” said Hargett.

Among the “three biggest myths” about the ACA is that the law was repealed, that the health exchange is not up and running, and that small businesses are required to provide coverage, said MnSure Executive Director April Todd-Malmlov last week at the Urban League. MnSure is Minnesota’s official health insurance marketplace exchange for implementing the provisions of the ACA. 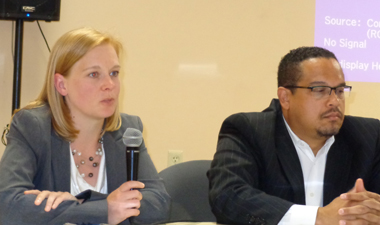 “You [as a business] have to offer it, but the employee doesn’t have to take it, [and] you can’t be discriminatory,” she pointed out. However, employers and employees beginning in 2014 can buy affordable coverage and “do one-stop comparison shopping for affordable plans,” and small businesses up to 25 employees can be eligible for tax credits — up to 35 percent of the cost — to help them offer employee health insurance.

The law’s key provisions include reducing out-of-pocket spending on prescription drugs for seniors; providing free preventative-health services like mammograms for women; enabling young people to remain on their parents’ health insurance until age 26; and ending annual and lifetime coverage limits by insurance companies who no longer can deny or drop coverage on an individual with a pre-existing health condition.

Furthermore, consumers who buy coverage through MnSure (enrollment starts in October) could also qualify for tax credits on a sliding-scale based on income. “Everyone is required to have [health] insurance under the new law,” said Todd-Malmlov. “What you pay is based on what you make.”

Todd-Malmlov told the MSR afterwards that her office is “out doing forums every week all across Minnesota up through the entirety of the open enrollment period [in October] to get the word out.” Also, up to 10 “regional ambassadors” will be hired to disseminate information around the state, said Todd-Malmlov.

“An adjustment period” will occur as the law is fully implemented, Ellison warned of the ACA. “There’s no finger-snap solution.”

The congressman and Todd-Malmlov later joined State Senator Bobby Joe Champion and State Representative Raymond Dehn at the NorthPoint forum, where around 10 Blacks were among the 30-or-so persons in attendance. Ellison recalled that several years ago he conducted a healthcare forum at the community health center that was contentious. “We did need [healthcare] reform,” adding, now that it’s the law, he believes the ACA “works for everybody.”

“MnSure is there to serve everyone,” said Todd-Malmlov as she showed its website on a large projection screen. “People now have choice.”

Asked about the “penalty” if a consumer does not sign up for health insurance, Ellison replied, “Nobody is going to jail — they deduct it from your [tax] refund,” referring to a $95 cost assessed after next year that will increase each year after. “It’s not fair that you don’t pay and you can [afford it]. You have to have some coverage.”

Asked why aren’t more Blacks at these informational events, Northside Residents Redevelopment Council Director Ishmael Israel said, “I knew about this one because of my ongoing relationship with our elected officials. Are we reaching people and getting them the information in the way that they understand the urgency and the flexibility? There are a lot of meetings to just talk at you and not a lot of substantial information that get exchanged.”

The NorthPoint ACA forum was very informative, he surmised. “I think because of the quality of the questions that were asked, and the familiarity” of the new federal healthcare law, said Israel.

“The outreach to reach communities and to make sure people understand what the benefits are [should] have started yesterday,” believes NorthPoint CEO Stella Whitney-West. “A lot of people, small businesses and nonprofits that we talk to said they are a little confused. The key is getting as much information into the hands of people, but also getting the information in a form that they can understand.”

“I’ve been following it before it got started,” added John Martin of St. Louis Park on the healthcare law before it was passed.

“I got a lot of good information,” said Dahir Guled, St. Paul. “I have been a couple of years without insurance… I got laid off.”

Ellison said that he was pleased with the turnout of the two events: “I feel like it went well.” The congressman noted that more forums will be held in the coming months to inform the public on the ACA.

“It’s going to be a long-term process. We are not going to get it all done [quickly]. We are going to keep doing it because it is going to take a lot to get the word out. This is going to do a lot of good for a lot of people,” said Ellison

“I appreciated the panel and the number of questions [that were] able to get answered,” said Israel.

“I think it is going to help folk,” concluded Guled of the ACA.