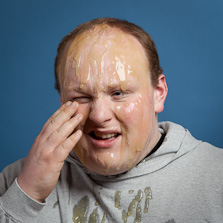 Earlier today, I received the following message (via my editor):

I feel I should defend myself against your scurrilous attack upon my methods and my character.

The controversy seems to center around my reading of the history surrounding the sad case of Father Louis Hennepin.  I do not claim to have access to secret knowledge.  My conclusions were formed by the circumstantial evidence:  historical references to Hennepin’s long lost secret diary, duLhut’s statement that Hennepin would not tell him where he had gone and the fact that his burial place is unknown which tells me he left the church prior to his death.

You say Hennepin’s lies are fairly well documented.  By whom?  His most prominent critic was Francis Parkman, head of the History Department at Harvard in the mid to late 19th century.  Mr. Parkman came West and lived for a short time with the Dakota.  Somehow he formed the opinion Hennepin could not have traversed the length of the river in the time frame laid out by Hennepin himself.  Mere speculation on his part.  Not surprising for such an anti-catholic bigot as Parkman.  But that’s how history is written.

I did find a time and distance chart by the US Army from 1823.  The distance from New Orleans to Fort Snelling is listed as 1600 land miles, 2065 river miles.   Steamboat time upriver is 22 days, downriver 11 days.  I then concluded Hennepin could easily have accomplished his river length journey.  He did not have to stay in any navigable river channel.  He could easily have used relays of paddlers or even a fast canoe with multiple paddlers as they did on the Great Lakes. Or he could have taken the journey in stages.  How do you or anyone know what the exact circumstances were?

But the most damaging part of your screed was directed at the last nine lines of the show.  You describe it as a “stunningly condescending lecture” showing “naked contempt” for the audience.  But in reality it’s just a summation to match the introduction at the beginning of the show.  Given the tone of the whole work, it’s as playful as the rest of it.  You do not have to go out and spread the word.  I’m just asking you to keep an open mind.

TC Daily Planet has my press release and my contact.  You chose not to inquire as to the reasons for my conclusions.  You simply gave your own interpretation precedence.  As one arm-chair historian to another: write your own show.  Stop being a bully with a pulpit.

Sidestepping for the moment the, er, rather personal invective – I’ve sought his permission to reprint his e-mail in full, since I think there’s actually a worthy discussion to be had here.

Not to bog this down into a deconstruction of source texts, but my main point of contention would come from the words composed by Father Hennepin himself – fourteen years after his publication of Description de la Louisiane, he wrote a follow up entitled Nouvelle découverte d’un très grand pays situé dans l’Amérique entre le Nouveau-Mexique et la mer glaciale, which flatly contradicts several of his own facts, including but not limited to:

Those are some of the clear, measurable contradictions within his own source texts: he also generates much “new information” between the publication of the two books (claiming to the first white man to paddle on the Mississippi, and that Joliet and Marquette never reached the river, for one) – and there is surely worthy debate to be had over what his motives may have been (and, indeed, the latter fact was commendably discussed in the play itself), but it also surely raises an eyebrow.

My primary contention, however, is the fact that the above facts are really kind of irrelevant in a discussion of the play. You were generous enough to take the time and energy to seek me out and e-mail me – but without this review, your audience has no access to this dialogue. There were no sources cited in your programme, nothing on the website. Yes, I have your contact information, but I chose not to inquire as to the reasons for your conclusions because of the fact that my audience and your audience are the same – the only information they have access to in the moment is what you choose to put on the stage.

But in reality it’s just a summation to match the introduction at the beginning of the show.  Given the tone of the whole work, it’s as playful as the rest of it.  You do not have to go out and spread the word.  I’m just asking you to keep an open mind.

I also strongly object to this characterization of the closing speech: it was far more than a simple summation. I can’t recall the exact phrasing, but I do recollect a call to the audience to actively spread the work of the redeeming Father Hennepin’s story to others – a call which suggests, if only through uneasy implication (and that’s a very slippery little thing), the factual basis of what the show’s just said to us. But rather than a back-and-forth, I’d cheerfully invite you to submit the text of the closing speech, and allow the audience/readership to analyze intent on their own.

I’d like to thank you to take the time for reading, and for composing a thoughtful response – I’m well acquainted with the stresses of producing a Fringe show, and the associated frustrations when critics don’t seem to connect with what appears on stage. My objections to the show remain, intensely so, but I certainly hope that no personal animosity was conveyed in my expression of that.

I’d like to open this discussion up the readership – what are your thoughts on the debate? Are my objections unfair? Beyond this, I would like to encourage all of you to go out and catch one of the remaining performances, taking place at the Rarig Proscenium, tonight at 7pm, Wednesday at 5:30pm, and Thursday at 8:30pm – for surely the author’s best arguments are put forth in the work itself.