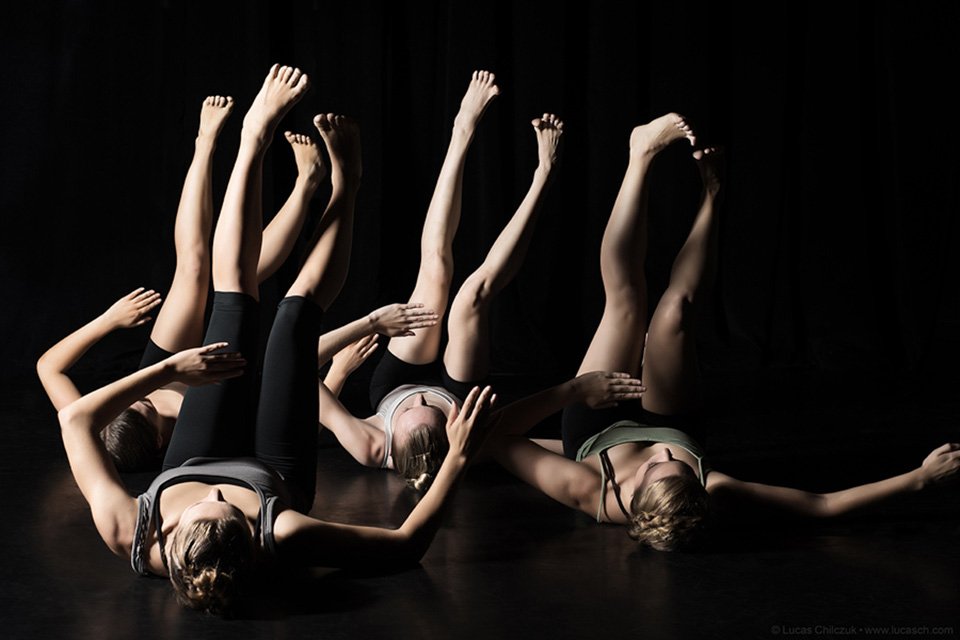 Okay, so, that description is frustratingly vague. What exactly is this show? Three dances, three dancers, three choreographers. As for overarching theme, I would wave ambiguously at the word “feminism.”

If you’d asked me in the first ten minutes what this show was about, I’d have said something to the effect of “It’s a series of solo character portraits through dance,” as each member of the company comes out in a costume and glides through the space. Most entertaining of these was a number in the persona of an ungainly lush, swaying and wobbling across the stage. (I’ll confess that I’m a huge sucker for this kind of thing — the exercise of extraordinary physical control to represent the loss of physical control.)

Then all three dancers came out, and began to present a kind of physical relationship with each other. I spent about ten minutes somewhat frustrated, as I tried to connect what I was seeing to what had gone before, until I realized that this was a completely separate piece — there was no connection.

I got that “three dances” from the programme, though I’ll confess I had some difficulty telling where they began and ended. When one character enters while the other is still onstage, then begins dancing before they exit — is this a smooth transition between two separate dances, or intended to be a continuing piece? Likewise, the moments of empty stage — are these scene breaks, or pauses in a continuing thought?

At first I assumed that the three solo dances I saw were a single set, and as the ensemble dance was significantly longer than any of the others, I looked for a breaking point in the narrative. It’s not until I perused the programme after the show that I realized that the first two solo dances were one dance, the alcoholic stumbler was the second, and the massive ensemble piece (by far the bulk of the show) was the third. This is significant, because by not being able to tell when one dance ended and another began, I wasn’t able to view them as self-contained sets — I was looking for connections where none existed.

I was hooked on the solo pieces, and found my eyes glazing over on the ensemble. (It’s worth noting that I spoke to at least one audience member who had exactly the opposite response.) I found it to be just too much beautiful abstraction, under some rather stiff readings of Adrienne Rich’s writing. (And it’s also worth noting that, while I admire Ms. Rich’s career as an activist, I find much of her poetry to be execrable.)

There is much impressive beauty and skill here, but I suspect that the vast majority of the show is geared towards the specialist, not the casual viewer.