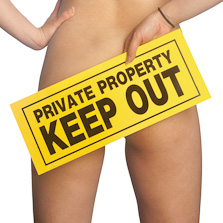 The Folly of Crowds: A Heterosexual Buttsex Play by Clay Sushi Productions

Okay, so I was initially turned off by the title/image of this show, and then I was turned on again by the description and oh God this sentence ended up in a different place than I intended.

My sense, reading the description, was that the premise could be a jumping-off point for a funny and interesting discussion of sex and gender and power and all that good stuff. Turns out that the play goes more for a soapy revenge plot, and while it’s hardly fair to criticize the show for not being what I wanted it to be, it still feels a bit disappointing.

In any case, the dialogue and performers all seem competent. But the great question that leaped into my mind, watching this, was: when the hell did my biological clock prematurely tick over into “cranky old man”?

The play revolves around a group of inertial college students, terrified of the professional world and preoccupied with their sexual relationships with each other. And what does it say about me that my reaction to them is, “Why don’t you grow up and deal with some real problems?” And, yes, while I fully appreciate the fact that much of the play is there to satirize them, that doesn’t mean that I enjoy spending time in their company. I breathed a sigh of relief when a functioning adult character was introduced, followed by a sigh of disappointment as it was revealed that he has the impulse control of a toddler.

The last scene felt a bit tacked-on to me, as it seemed to suggest that that discussion had been what the play was actually about, when the vast bulk of the action had revolved around a rather juvenile prank. (I particularly resented the last minute or so, since it seemed to be trying to introduce some more profound themes that would have had to have been introduced much earlier for them to have an appropriate impact.)

I realized after the fact that the playwright, Mat Smart, was also the author of “A Standing Long-Jump”, a Fringe show I saw last year that left me with much the same response — well-written, well-composed, and revolving around a series of characters I kind of wanted to strangle. He seems to have a great fascination with the intoxicating power of (the early stages of) romantic love, and that’s emphatically one of the themes that I find wearisome, which may account for my inability to connect with his work.