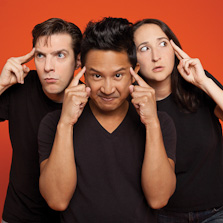 I’m typically a great fan and a great defender of Joseph’s scripts — a defender of the fact that they tend to be much deeper, layered, and more complex than I think his audiences acknowledge. (Perhaps that’s representative of a kind of prejudice against — well, not comedy, but particularly the broad, farcical style of comedy that he favors.) So here’s a show that I found myself chuckling at pretty consistently throughout (it features his usual tight comedy writing — the man has a way with a one-liner), but walked away feeling a bit lukewarm about the whole experience. What gives?

The obvious point is that I’m not really in the target age range for this show, although I maintain a longtime interest in children’s theatre. There’s a lot here to like — he doesn’t shy away from complex language, he pushes the plotting to a fairly dark place, I thought that the “invented profanity” schtick was an inspired way to do dirty jokes in a wholesome manner. The ensemble is excellent — Joseph and Mo are both established comic talents, but he’s found a wonderful new instrument in Randy Reyes, an Equity actor who seems totally prepared to commit to any ridiculous idea (e.g. shouting “I am cute and squeaky” repeatedly, with utterly poker-faced conviction). To say that the script wouldn’t have worked without someone like him may seem like a veiled insult, but it had someone like him, so it’s all to the good.

Part of it may be that I find many of the ideas to be laid out in a way that I find too explicit for my tastes in Joseph’s writing for children (and, indeed, I recall chafing at this in An Inconvenient Squirrel). I wonder if I wouldn’t feel more positively towards the whole affair without the explanation and summation at the opening and closing — and, yes, I totally get that the “morals” are being delivered in a comic, even subversive manner, but they’re still morals and they still make me squirm a bit (and, if anything, I was much more hostile to the device as a child).

Still, like I said — laughing from beginning to end. My overall experience was a pleasurable one, and one that seemed to be borne out by the others in the theatre with me.